Don't forget to fill out the completion form when you are done with Quiz 26.

"Believe on the Lord Jesus Christ, and you will be saved, you and your household." –Acts 16:31 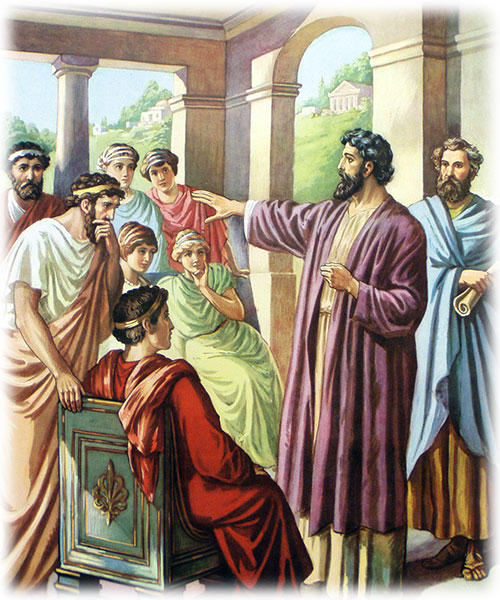 Before Saul met Jesus, He was a proud Pharisee who tried to carefully obey the Ten Commandments, as well as the many rules that had been made up. But now he was a Christian. The Bible starts using the name “Paul” for him in Acts 13:9.

After Paul learned that Jesus is God the Son, he never stopped being thankful that Jesus forgave him for the terrible way he had treated His believers. He became a very powerful worker for Jesus, and he eagerly taught both Jews and Gentiles, because he knew how much God loves every person in our world. Paul loved Jesus so much, He was all he wanted to talk about. 1 Corinthians 2:2.

After Paul and his friend Barnabas preached the good news about Jesus Christ in a city named Antioch, people started calling the believers Christians. Of course, the religious leaders didn’t like Christians. They didn’t like Paul, either; and wherever he went, they tried to stop him from preaching and teaching. Acts 11:25, 26.

One time Paul and his companion Silas were put into prison. Paul, in the name of Jesus, had told Satan to come out of a slave girl, who was a fortuneteller. As a result, she couldn’t earn money for her masters anymore; and they were angry. What did they do? Acts 16:19-24. 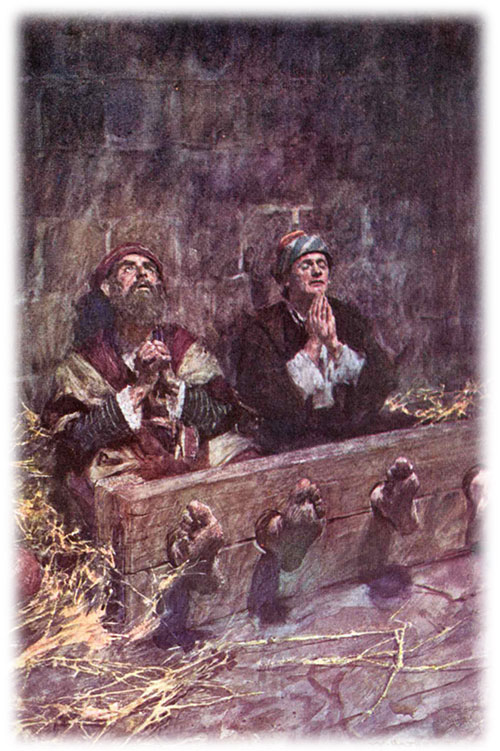 Soon Paul and Silas were in that dark, dirty prison, sitting helplessly on the cold floor. Oh, how their backs hurt! How uncomfortable they were! They could hear other prisoners cursing and swearing; but instead of complaining, what did they do? Acts 16:25.

Suddenly, the ground shook, the prison doors swung open, and the chains fell off all the prisoners. The prison keeper was terrified; he was sure that the prisoners would all escape. He knew that he would be blamed, and that he might lose his life. Paul and Silas quickly told him that no one had escaped. Acts 16:26-28.

The earthquake was a miracle, but what happened later that night was a more wonderful miracle. Acts 16:29-34.

For many years, Paul and his companions were missionaries to places that were far away from Jerusalem. Many Jews and Gentiles became Christians, and new churches were started.

One time, Paul got news that there was a terrible famine in the land of Israel, and he knew that the Christians in Jerusalem needed help. When he told the Gentile Christians about them, they gladly showed their love for their faraway brothers and sisters by giving Paul money to take to help them. 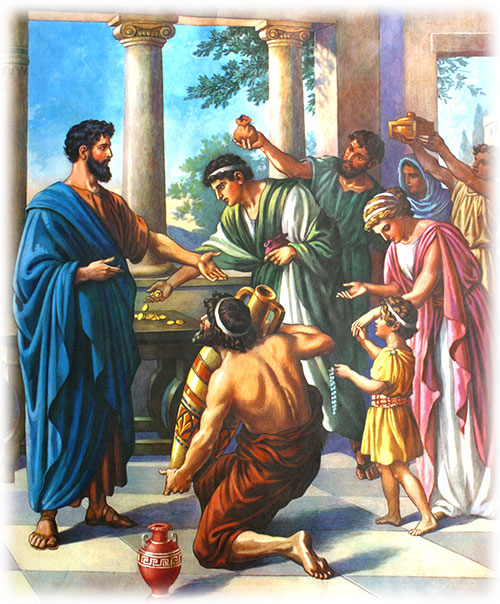 Paul was old by now; and even though he knew that there were still many leaders in Jerusalem who knew him and didn’t like him, he decided to take the money to Jerusalem himself. He wanted to tell the believers there about how God was blessing their many Gentile brothers and sisters.

The Christians in Jerusalem were glad for the news about the new Gentile Christians. And, of course, Paul delivered the money they had sent. Acts 21:17-19.

But one day when Paul was at the temple in Jerusalem, some people who had come from another country recognized him. They loudly shouted things about him, and people rushed to see who they were yelling about. The news spread quickly, and soon the whole city was in an uproar. The crowd started shouting and yelling that Paul should be killed. If the Roman commander in Jerusalem hadn’t stopped them, those angry people would have killed Paul. Acts 21:27-40.

When the people became very quiet, Paul started talking to them in their own language. He told the story of Jesus’ meeting him on the road to Damascus, and how he had become a worker for Him. But when Paul told them that Jesus had sent him to work for the Gentiles, everyone started yelling again. They couldn’t believe that God cared about Gentiles; and the moment Paul said the word Gentiles, they began acting like wild animals. Acts 22:21-29. 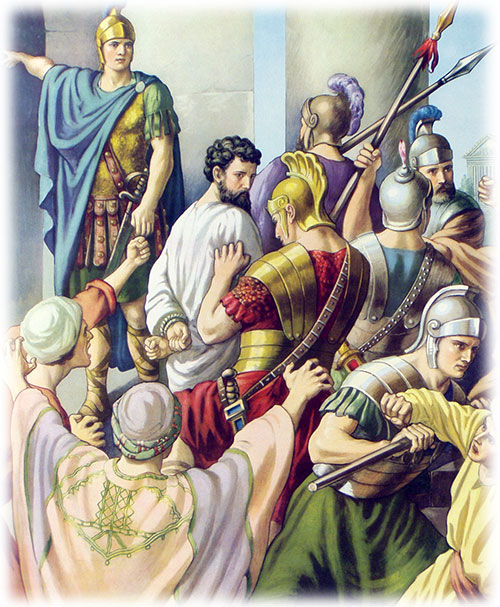 Paul had become a prisoner, and the plan was to take him to Rome, which is in Italy. The trip was very long, and most of the journey was in sailing ships that were filled with prisoners and the soldiers who guarded them. The commander of the soldiers was a centurion named Julius.

Julius soon learned to respect Paul. At one of the ports where the ship stopped, Paul warned Julius that the ship should stay there until the bad weather was over. But because the owner of the ship wanted to go on to a better port, Julius didn’t take Paul’s advice. Acts 27:9-11.

The terrible storm did come; and it was so bad, everyone thought the ship would sink, and they would all drown. But one night Jesus sent an angel to tell Paul that even though the ship would be wrecked, the people’s lives would all be saved. The next morning, Paul told Julius what the angel had said, and Julius followed Paul’s advice about what they should do. Acts 27:20-26.

On the fourteenth day of the storm, the sailors could tell that they were near land. What happened that day was very scary and exciting. Just as Paul said, the ship was wrecked, but the lives of all the prisoners and soldiers were saved. Acts 27:27, 37-44.

When Paul finally arrived in Rome, he was allowed to stay in a house with a soldier guarding him. Many people visited him, and some of them became Christians. Jesus was protecting His loyal worker, wasn’t He? Acts 28:30, 31. 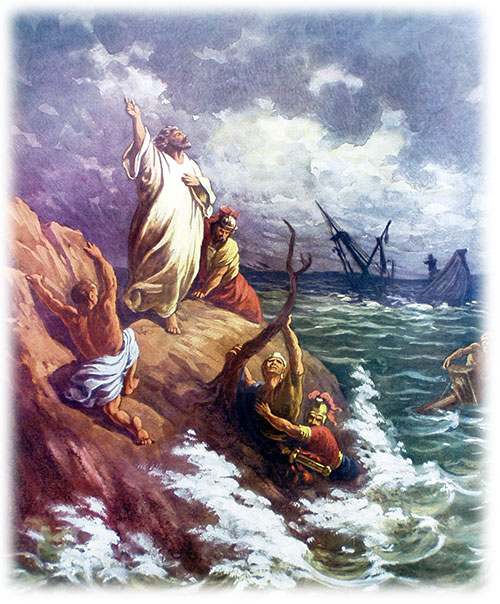 Even though Paul went through many kinds of trials before he died, he never complained. He was always glad that he could work for Jesus. 2 Corinthians 11:24-27; 12:10.

The Bible has many stories about people who faithfully worked for Jesus. No matter how hard Satan has tried, he hasn’t been able to keep people from learning about Jesus. Many believe that Jesus will come again, but they don’t know what the Bible says about how He will come.

Some people believe that Jesus will come secretly and take the good people to heaven, and that the others will be left behind. But the Bible says that both living and dead good people will still be here when Jesus comes. And His coming won’t be secret. Everyone will see and hear Him. 1 Thessalonians 4:15-17; Revelation 1:7.

Jesus warned us that false christs will try to deceive people. We might hear that Jesus is here or there; but even if they work wonderful miracles, we are not to believe in them. Matthew 24:23-27.

Satan himself will pretend that he is Jesus, and he will show himself in different places on our earth. He will look and act so much like Jesus, many people will believe that he really is Jesus. 2 Corinthians 11:14. 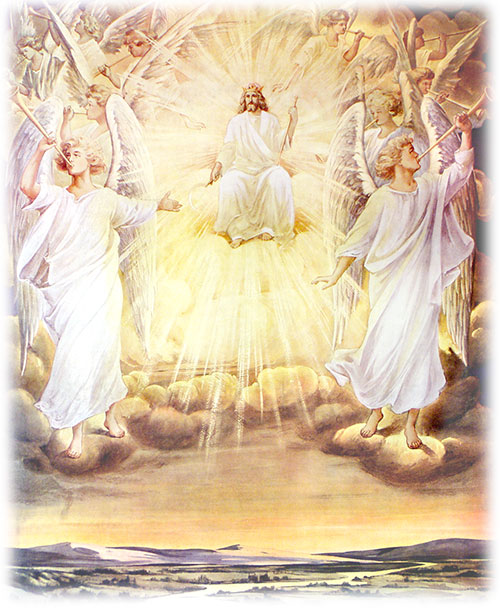 When Jesus left our world, He went up into heaven. Acts 1:9-11. When He comes back, He will come down out of heaven. But He will not come all the way down onto the earth. How do we know that? Because the Bible tells us that the good people will go up to meet Him in the air. 1 Thessalonians 4:16, 17.

So, one way we can know that Satan is not Jesus is that he will show himself in different places on the earth. God will not permit him to come in the air the way Jesus will come.

Read one of Jesus’ most wonderful promises in John 14:1-3.

The animals, birds, and fish will never get sick and die. And they will all be tame and gentle. What fun we’ll have playing with them! Isaiah 11:6-9.

Everything will be perfect and beautiful in heaven. There won’t be any weeds or thorns or dead leaves or wilted flowers. The hills will be covered with soft, green grass, and many kinds of trees will be there. Our food will be more delicious than we can imagine. Revelation 22:2.

There will be no more terrible wars or storms or tornados or floods or earthquakes. The weather will always be just right. It will never be too hot or too cold. The breezes will be soft and gentle.

Our mansions will be waiting for us in the New Jerusalem. That city is many times bigger than any city in our world. It glows with a beautiful light, because God is in it. Revelation 21:16, 17, 23.

The foundation of the beautiful wall around the city is made of twelve different layers of sparkling, precious stones. 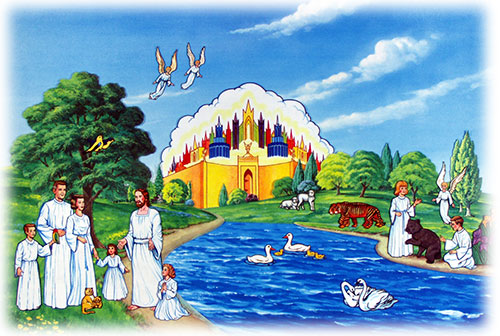 There are three open gates on each side of the wall; and they will never need to be locked because there will be no robbers or any kind of enemies in heaven. Revelation 21:12-14.

At last, we will meet the angels who have helped us here on earth. And we will meet so many wonderful people. But best of all, we will be with Jesus.

Just thinking about heaven makes us want to be there, doesn’t it? And we can be there. Jesus wants us to be there, and He will help us be ready to go there with Him when He comes back soon.

What about the bad people who will be dead after Jesus takes the good people to heaven? The Bible says they will not live again until after a thousand years. Only Satan and his wicked angels will be alive on earth during those thousand years. Because there will be no one here for them to tempt, they will be as though they were prisoners, chained to this earth. Revelation 20:5, 1-3.

At the end of the thousand years, as the good people return to this earth with Jesus, He will raise the bad people to life again. Then, the beautiful New Jerusalem will come down from heaven to our earth. Revelation 20:5; 21:2.

When Satan sees the millions of bad people that Jesus will raise to life again, he will act as though he were released from prison. He will make them think that they can easily take the New Jerusalem. But what will happen when they try to do that? Revelation 20:7-9.

When the Bible says that eternal or everlasting fire will burn forever, it means that it will be like the “eternal fire” that burned Sodom and Gomorrah to ashes. And it will be like the servant who promised to serve his master “forever”; but he could, of course, serve him only until he died. Jude 1:7; 2 Peter 2:6; Exodus 21:5-6.

So Satan and his angels and all the bad people will be burned to ashes; and they will never live again. That will be the “second death” for the bad people. Malachi 4:1, 3; Revelation 21:7, 8.

Then Jesus will make our world all new, and this old world won’t be remembered anymore. Perfect people will live in a perfect world, and sin will never spoil it again. Isaiah 65:17; Nahum 1:9.

Don’t you want to be there?

Jesus is coming back soon, just as He has promised. He will take each person who has chosen to love, trust, and obey Him back to heaven with Him. Do you want to be ready, too? Will you ask Jesus right now to help you be ready?

Don't forget to fill out the Completion Form when done with Quiz 26.