"In truth I perceive that God shows no partiality. But in every nation whoever fears Him and works righteousness is accepted by Him." –Acts 10:34-35 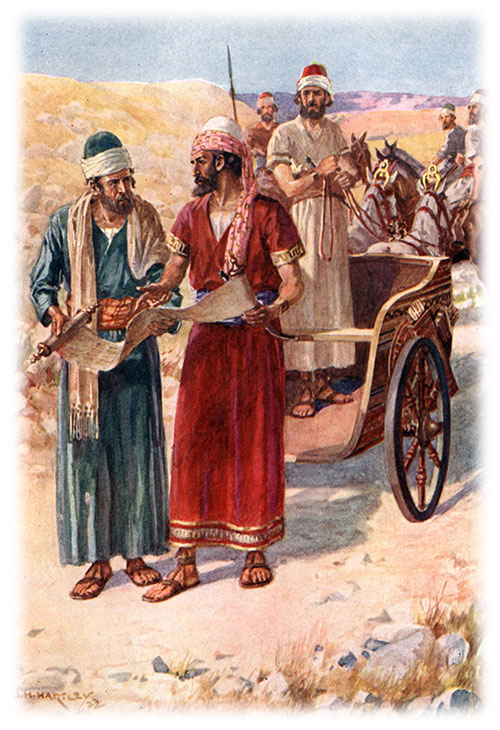 Do you remember that Philip, one of the seven deacons, had gone to Samaria to tell the people about Jesus? Many Samaritans believed his preaching and accepted Jesus as their Savior.

One day God sent an angel to tell Philip what to do next. What did the angel tell him? Acts 8:26.

Philip quickly obeyed; and as he walked along the dusty desert road, he saw a chariot going down the road, too. The man sitting in the chariot was a very important officer in another country. That man loved God; and he was on his way back from Jerusalem, where he had gone to worship at the temple. Before long, Philip knew just why Jesus had told him to go down that road. Read the story in Acts 8:29-35.

As Philip and the officer talked together, Philip told him about Jesus and how He had come to save us from our sins, just as the prophets had written. The officer was thrilled as he listened, and he accepted Jesus as his Savior. When they came to a pool of water, he asked Philip whether he could be baptized. What did Philip answer? Acts 8:36-37.

Did Philip get some water from the pool and sprinkle a little on the head of the officer, or did he baptize him the same way Jesus was baptized? Acts 8:38.

Jesus was starting to send missionaries to other places, wasn’t He? And after Philip baptized the officer, Jesus wanted him to visit another place. The way he got there must have been very exciting. Acts 8:39, 40. 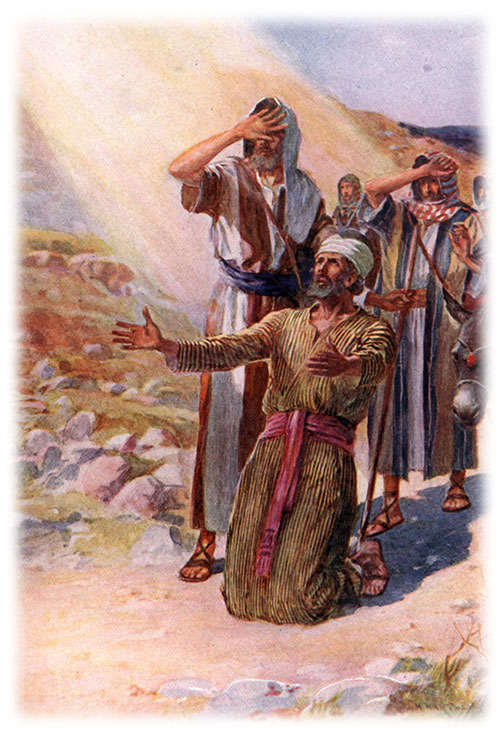 Do you remember the young man who cared for the coats of the cruel people who stoned Stephen? It was Saul. And after Stephen died, Saul did his best to help the priests and rulers get rid of the followers of Jesus. He even asked for letters from the high priest that would give him permission to go to Damascus and bring believers in Jesus back to Jerusalem as prisoners. Acts 9:1, 2.

The high priest was glad to give Saul the letters, and soon he and his companions were on their way to Damascus. The trip took several days. As they got close to the city, what suddenly happened? Acts 9:3-7.

Saul was probably still shaking as he got up from the ground. The bright light had made him close his eyes. Now when he opened them, he couldn’t see anything. He was blind. Imagine how Saul, who thought he was pleasing God, must have felt as his friends took his hand and led him into the city. He felt so bad that for three days he didn’t eat or drink anything. Acts 9:8, 9.

Jesus knew that Saul needed help; so He asked Ananias, one of His followers, to go to Saul and talk to him. It was hard for Ananias to believe that Jesus would tell him to do that. He reminded Jesus that Saul was an enemy, and that all the believers were afraid of him. No wonder it was hard for him to go and talk to him! But Jesus told Ananias not to be afraid. Jesus knew that Saul would become a very strong, special worker for Him. Did Ananias obey Jesus? Acts 9:10-19.

The people in Damascus had heard about Saul. They must have been shocked when he went into their synagogues and taught the people about Jesus. It didn’t take long for the religious leaders to decide that they had to get rid of him. They put guards at the gates of the city, planning to catch him as he went out. 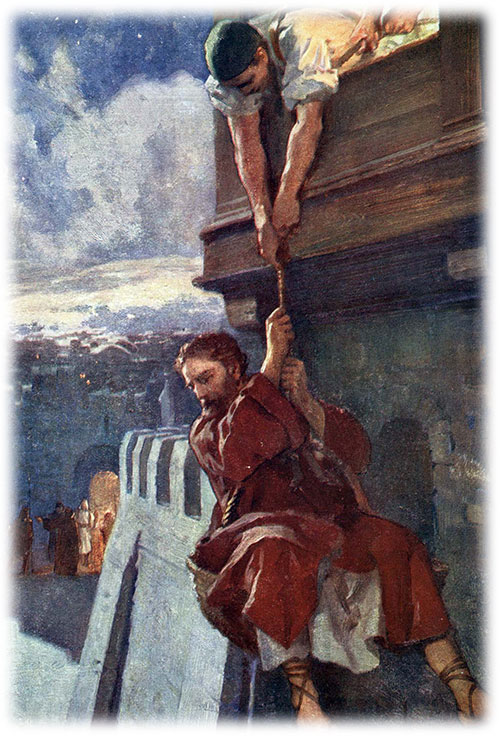 But Saul heard about their plan, so he didn’t go out through a city gate. Instead, how did Jesus’ followers help him escape from the city? Acts 9:20-25.

Jesus knew that in his heart, Saul really wanted to please God and work for Him. Aren’t you glad that Saul didn’t get discouraged and give up?

When Saul finally went back to Jerusalem, the followers of Jesus there were afraid to trust him. They probably wondered whether he was really being a spy, and whether he would get them into even more trouble. But a man whose name was Barnabas helped them decide to trust Saul. Acts 9:26-28.

Soon Saul was preaching about Jesus so boldly in Jerusalem that the priests and rulers decided they must get rid of him. When Saul found out about it, he quickly left the city. Then, for a while, the believers in Jesus didn’t have to be so afraid of being put into prison, or of being killed. Acts 9:30, 31.

After Jesus went back to heaven, His disciples decided to choose someone to take the place of Judas. When they prayed, the Holy Spirit helped them choose a man named Matthias. Acts 1:23-26.

People who chose to follow Jesus were called believers, or disciples. But the twelve special disciples were called apostles. They were leaders and teachers for Jesus, and He did many wonderful miracles through them.

Jesus did one of the miracles through Peter when he was in the city of Lydda, and it helped many people believe in Jesus. Acts 9:32-35.

It didn’t take long for people in other places to hear about what had happened in Lydda. Some messengers from nearby Joppa came, begging Peter to go there quickly. What had happened? Acts 9:36-38.

Once more, a miracle helped people learn about Jesus. Again and again, He was proving through His disciples that Satan couldn’t stop people from choosing to follow Him and belong to His kingdom. Acts 9:39-43.

Jesus had said that the good news about Him was to go to all the world. But it was still hard for the apostles to believe that Jesus really loved the Gentiles as much as He loved the Jews. They still thought of the Gentiles as being unclean. Jesus knew that it was time to change the way the apostles thought. While Peter was still in Joppa, something was happening to a Roman soldier whose name was Cornelius. He lived in the city of Caesarea. The Jews thought of Romans as heathen and Gentiles, but this soldier had learned to love and obey God. Acts 10:1, 2. 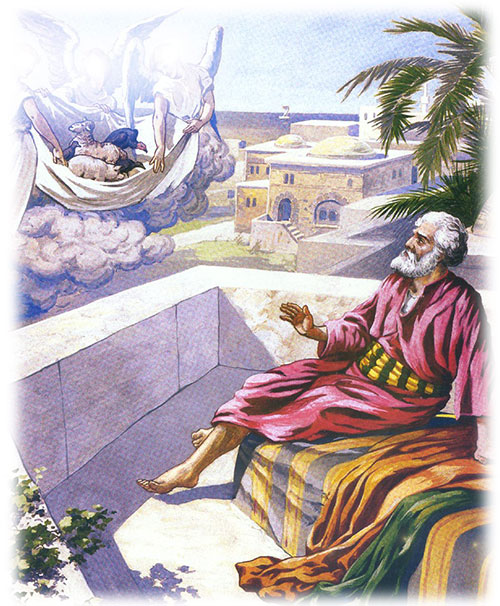 As the messengers from Cornelius were getting close to Joppa, Peter went up on the flat roof of Simon’s house to pray. It was about noontime, and he was hungry. While he waited for dinner, he went into a trance, or vision, which is a lot like a dream. What did he see in the vision? Acts 10:9-16.

Peter couldn’t imagine why Jesus would give him such a strange vision. He was sure that Jesus didn’t mean that Peter should really eat those things that he saw in the sheet. As he was puzzling about it, what happened? Acts 10:17-20.

Peter had learned to obey quickly. He took some of the Jewish believers with him, and they went with the messengers that Cornelius had sent. Acts 10:21-24.

At the house of Cornelius, many people were waiting for him to come and teach them. What did Cornelius do when he met Peter, and what did Peter tell him? Acts 10:25-29.

Now Peter understood what the vision meant. Jesus wasn’t talking about food at all. He was helping Peter understand that he wasn’t to think of the Gentiles as being unclean. And when Peter heard Cornelius tell about the angel visiting him, he gladly admitted that he needed to change his thinking. Then, while he was talking to them about Jesus, the Holy Spirit came upon those Gentiles. What did Peter say about that? Acts 10:44-48. 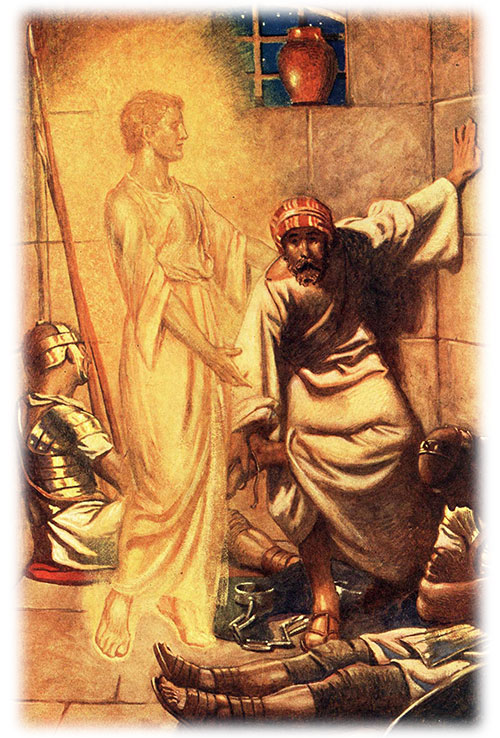 When Peter got back to Jerusalem, some of the Jewish believers were upset that he had actually eaten with Gentiles, and stayed with them. But after Peter explained all that had happened, they thanked God that Gentiles could be saved, too. Acts 11:18.

In Jerusalem, wicked King Herod wanted to do something to please the Jewish priests and rulers. He decided to do all he could to help them stop people from choosing to follow Jesus. He was being like his grandfather Herod, who had wanted to find baby Jesus and kill Him. He had already killed James, one of the twelve apostles; and when he saw how happy that made the priests and rulers, whom did he plan to kill next? Acts 12:1-3.

The believers prayed the whole time that Peter was in prison. They were already very sad about what Herod had done to James, and they felt they just couldn’t lose Peter, too. Acts 12:4, 5.

Herod was sure that Peter couldn’t escape like he had once before. This time, his wrists were chained to a soldier on each side of him. Two more soldiers were watching at the locked door of his cell. Other soldiers were at the second locked gate, and more were at the other gates. Altogether, there were sixteen soldiers guarding Peter. The night before Herod was planning to kill him, was Peter lying awake and worrying? Acts 12:6.

During the night, a bright light suddenly shone in the prison. Peter felt someone pull him to his feet, and he heard someone say, “Get up quickly. Put on your sandals and your coat, and follow me.” As he obeyed, Peter didn’t know that Jesus had sent an angel to rescue him. He thought that he was having a wonderful dream. The chains fell off his wrists. All the guards were sound asleep as the huge prison doors opened one after the other without making any noise at all. Finally, they were outside in the cool night air. Then the angel disappeared, and Peter suddenly knew that he wasn’t dreaming. He was free. Acts 12:7-11. 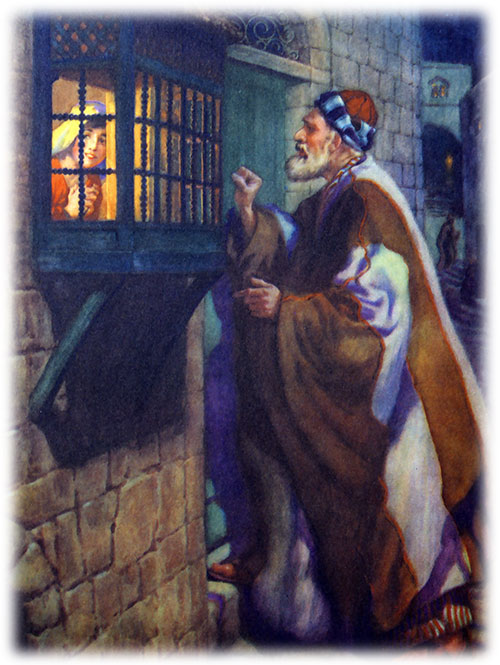 After the angel rescued him from prison, Peter hurried to where he knew the disciples and believers were praying for him. As he knocked at the door, he could probably hear their voices inside as they begged Jesus to save him from dying. A girl came to the door, but because she was so excited, what did she do instead of letting Peter in? Acts 12:12-15.

Peter kept knocking; and when they finally came to the door, he quickly motioned for them not to make any noise. He told them about the wonderful miracle that Jesus had done to save his life. And he said to let James, who was probably a church leader (Acts 15:13), and the other believers know about it. Then,Peter quietly hurried to a place where he knew that he would be safe from Herod. Acts 12:16, 17.

When morning came, the soldiers were shocked to find that Peter was gone. They probably knew what their punishment would be, and it was soon ordered by wicked King Herod. But not long after that miracle, Herod died, too. Acts 12:18, 19, 23.

Everything that Satan was doing to stop people from choosing to follow Jesus was turning out just the opposite from what he planned. Acts 12:24.

Do you think that Jesus can take care of us when we are in trouble, like He took care of Peter? But even if we have to die because of choosing Jesus, we will be alive again when He comes; and we will live with Him forever. 1 Thessalonians 4:16, 17.

Do you remember what Peter’s friends were doing when he was in the prison? They were praying for him! Are any of your friends or family in trouble? You can pray for them, too. Jesus might not help them the same way He helped Peter, but He will answer in the best way. Philippians 4:19.