Sharing Jesus’ Love with Others 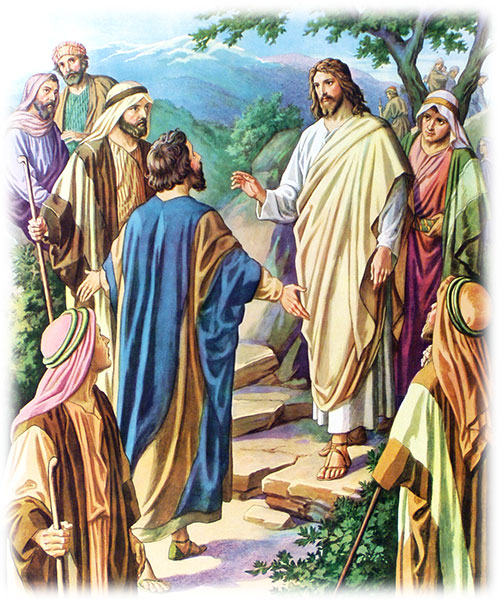 Jesus with his dsiciples after the resurrection

After Jesus died in our place and then came back to life, He was on this earth for almost six weeks. Some of that time He was with His disciples; and oh, how carefully they listened to every word He said! Then it was time for Him to go back to heaven. What promise had Jesus already given them? John 14:1-3.

That wonderful promise that Jesus made to His disciples so long ago is for us just as much as it was for them. Jesus also promised that He would never leave His disciples, or us, all alone. Remember that when we choose to belong to Jesus, we are His disciples, too. John 14:18.

Of course, the Holy Spirit has always been in our world; but Jesus promised to send Him in a special, powerful way after He went back to heaven. Where did He tell the disciples to wait until the Holy Spirit came with the special power that they would need? Luke 24:49.

On the day that Jesus knew He would leave our world and go back to heaven, He led His disciples out near the little village of Bethany. Bethany was on the Mount of Olives, close to Jerusalem. As Jesus raised His hands to bless His disciples, what happened? Luke 24:50, 51.

Jesus was leaving them. The disciples watched as a cloud hid Him, then they couldn’t see Him anymore. But as they gazed up into the sky, two angels suddenly came and spoke to them. Angels had come to take Jesus to heaven, and He had sent two of them back to remind the disciples of His promise. Acts 1:9-11. 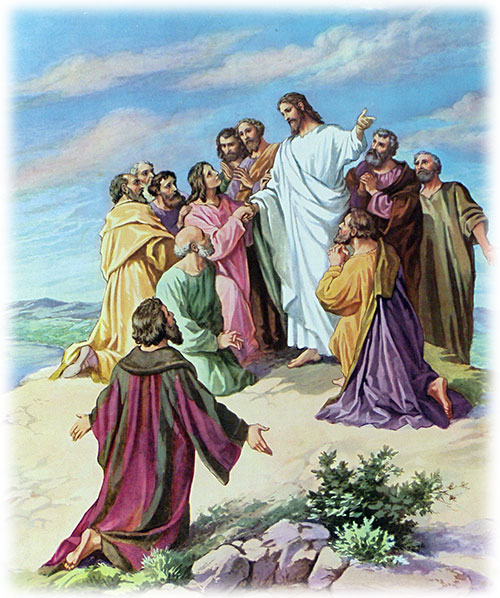 As the disciples went back to Jerusalem, they talked about what He had told them to do and the wonderful promises He had made. They knew that even though they couldn’t see Him, Jesus would keep His promise to help them tell others about Him and His amazing plan to save us. Matthew 28:18-20.

After Jesus went to heaven, the disciples still stayed in the upper room in Jerusalem. While they waited for the special power that Jesus had promised to send, they thought about the many times they had been selfish, jealous, and unkind to each other. They humbly asked Jesus and each other to forgive them. They wanted their hearts to be clean so the Holy Spirit could fill them with Jesus’ love and power.

Then one day they suddenly heard a sound like a strong wind. Jesus was keeping His promise. Other people around them could tell that something wonderful had happened. What was it? Acts 2:1-6, 12, 13. 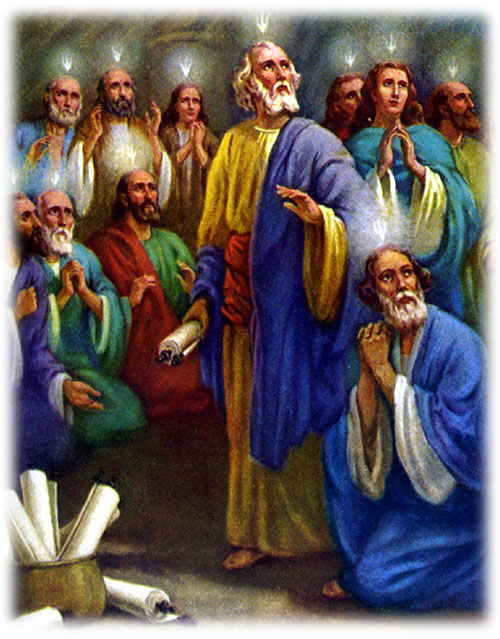 Right away, Peter fearlessly told the crowd that God had sent His Holy Spirit to help them tell people about Jesus. As the crowd eagerly listened, the Holy Spirit helped Peter preach a powerful sermon. He boldly told them that they had crucified the Son of God. And as the Holy Spirit spoke to their hearts, they knew that what Peter was saying was true. How many people chose to believe on Jesus and be baptized because of Peter’s sermon that day? Acts 2:36-38, 41.

That day was just the beginning of many things that happened after the Holy Spirit gave special power to the disciples. People were eager to become Jesus’ followers; rich people shared with poor people; believers loved each other. They were not proud or jealous. They were like one big family. Acts 2:44-47.

Satan was furious. The priests and rulers didn’t know what to do. They had tried to stop Jesus’ work by putting Him to death; but now more people than ever were choosing to believe in Him. Nothing was turning out like they had thought it would.

very day the disciples went to the temple to teach and preach to the people about Jesus. As Peter and John were going through a temple gate at about three o’clock one afternoon, something wonderful happened. Acts 3:1-10.

Everyone was amazed. But Peter and John soon saw that people thought they had the power to do such a wonderful miracle. At once, they told the crowd that the poor, lame man had not been healed because they had any special power. It was Jesus who had healed the man. Then they reminded the people that even though many of them didn’t realize it, they had killed God’s Son. Peter urged them to be sorry for having done such a terrible sin. Now Jesus was giving them a chance to repent of the terrible thing they had done. Acts 3:14-16, 19.

While Peter was talking, some of the leaders came by and stopped them. And even though Peter and John were put in jail that night, how many people who had listened to them became believers in Jesus? Acts 4:1-4. 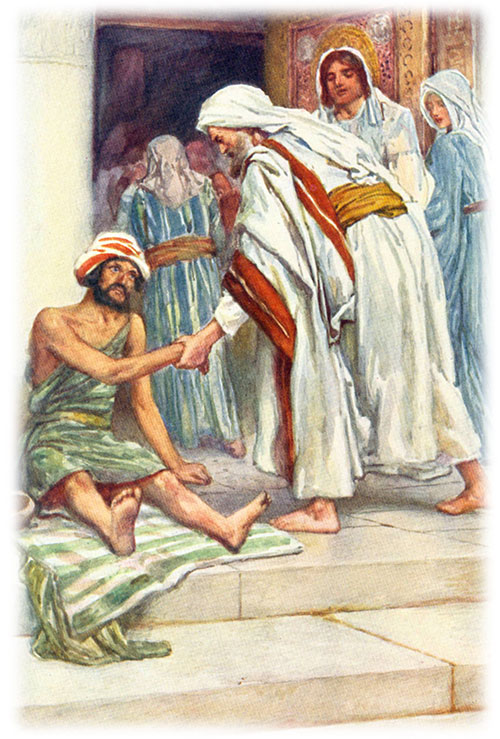 The next day when the council members met again, they brought Peter and John in to be questioned. Maybe the two disciples thought about how those same people had treated Jesus just a few weeks before. And maybe Peter remembered swearing that he didn’t even know Jesus. How much he had changed! The Holy Spirit had helped him change; and now Peter boldly answered the council. Acts 3:7-10, 12.

The council members didn’t know what to do. They sent Peter and John out of the room so they could talk things over. They had to admit that a miracle had happened. Finally they told the two brave disciples not to teach about Jesus anymore. Did Peter and John promise to obey that order? Acts 3:15-21.

Peter and John went back to the other believers and told them what had happened. Then they all had a prayer and praise meeting. Through the power of the Holy Spirit they were being brave and bold for Jesus. How did Jesus show that He was pleased about that? Acts 3:31.

Satan could tell that Jesus was helping the disciples. He saw how bold they had become, and he saw how many people were choosing to believe in Jesus. Even many of the priests were becoming Jesus’ followers. Acts 6:7.

When Jesus died and rose again, Satan knew that in the end, he himself would die. He knew that he had already lost the war, which he had started so long ago in heaven. And now he hated Jesus more than ever. He couldn’t tempt Jesus anymore, but he knew that he could still tempt and hurt the people in our world. He knew that would hurt Jesus, who loves us so much that He was willing to die for us. Also, Satan knows that everyone who obeys him will have to die along with him and his wicked angels.

Jesus gave His disciples power to do great miracles in His name, and they were healing many people. That made the high priest and other leaders angry. But when they tried to stop what was happening, how did Jesus help His disciples? Acts 5:16-32.

At first, the council members didn’t know what to do about the miracles and teaching that Jesus was doing through the disciples. But when they heard what Peter and the others said, they were so angry they planned to kill them. Then one of the council members said that they should be careful about carrying out their plan. What happened in the end? Acts 5:33-35, 38-42. 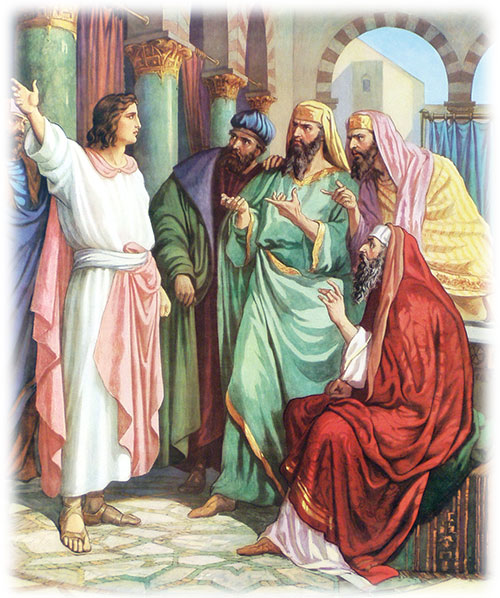 So many people were believing in Jesus, the disciples soon realized that they needed men to help take care of the new believers. The Holy Spirit helped them make a good plan, and seven men were chosen. They were called deacons. Acts 6:3-6.

Stephen, one of those deacons, was a good preacher as well as a good helper. As he worked for Jesus, how did the Holy Spirit bless him? Acts 6:8.

Stephen knew the Scriptures so well, his enemies couldn’t prove that there was anything wrong with what he was teaching people. But Jesus’ enemies were so determined to stop the work that he was doing, they even paid people to tell lies about him at the council. Acts 6:10-13.

When the high priest heard those lies, he asked Stephen, “Are these things true?” Instead of answering “Yes” or “No,” Stephen politely started tell a story that they loved to hear. The story started with Abraham, the man God used to start their nation, and whom all the Jews called their father. Acts 7:1-3.

As Stephen stood before the council, his face was shining like that of an angel. Acts 6:15.

Everyone listened quietly to his story until he said something they didn’t want to hear. What he said must have reminded them that Jesus had warned them that their beautiful temple would be destroyed some day. Acts 7:47, 48.

Suddenly, the council members became very angry. They started shouting and yelling at Stephen. But even though he knew that they would kill him, he wasn’t afraid. He told the council that they were being like their ancestors, who killed the prophets that had warned them to stop sinning.

What did Stephen see, and what did he say, just before those angry people killed him? Acts 7:51-60. 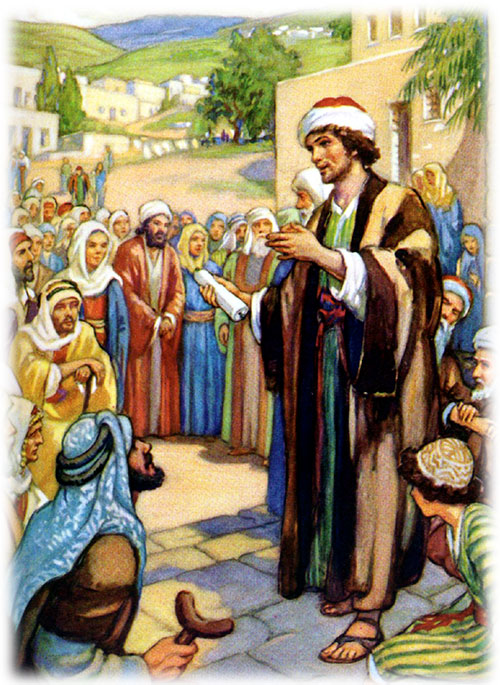 What did the council members do with their coats that day when they stoned Stephen for being loyal to Jesus? Acts 7:58.

Saul believed that the terrible things the priests and other leaders said about Jesus were true. After Stephen died, when the leaders tried harder than ever to frighten and hurt the believers, Saul was one of their best helpers. Acts 8:1, 3.

Because of the terrible persecution, many of the believers left Jerusalem and went to other parts of the country. But wherever they went, Jesus went with them through the Holy Spirit. And as they preached, many more people learned about Jesus; and they chose to be loyal to Him, too. Of course that made Satan angry. And the leaders were angry, too, as they saw what was happening.

Philip, one of the deacons, went to Samaria and preached the good news about Jesus in that city. The Holy Spirit did miracles through him by driving out evil spirits from people, and by healing many other diseases. So many people were believing because of Philip’s preaching, the disciples in Jerusalem sent Peter and John to help. Acts 8:5-8, 14.

On their way back to Jerusalem, Peter and John preached in many other places in Samaria. Jesus was blessing the work of His faithful helpers. Acts 8:25.

The Holy Spirit was the most special gift that Jesus gave the believers. He would help them, now that Jesus was in heaven. And God has promised to give us the same gift, too, if we ask Him. Luke 11:13. Will you ask for that special gift right now?

My Bible First - Lesson 24 - "Sharing Jesus' Love with Others"