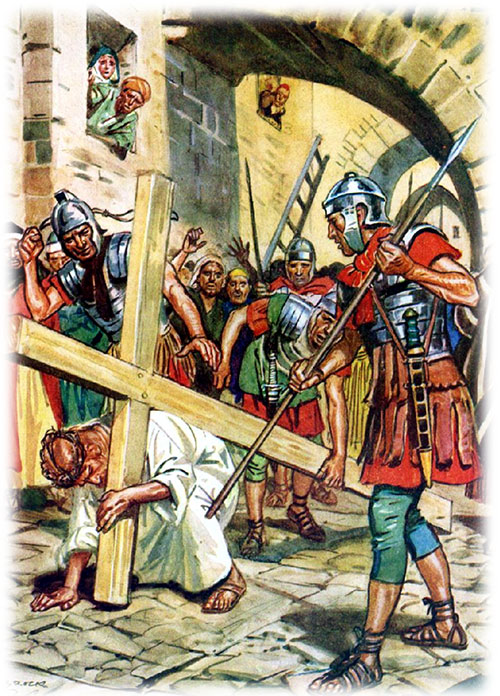 As Jesus was taken outside Jerusalem to where He would be crucified, it was hard for Him to walk. His whole body hurt. His back was bleeding, and His face was bloody from the crown of thorns.

Simon was carrying Jesus’ cross, and His sad disciples and friends were following Him. John walked beside Jesus’ weeping mother. Mixed-up thoughts were going through all of their minds. Had they been mistaken about Jesus’ being the Messiah? Would He still do a miracle to save Himself?

But could Jesus have saved Himself and also saved us? No. We are sinful, and we all deserve to die forever. Jesus was the only sinless human who has ever lived, so He was the only one who could take our sins, die in our place, and give us His perfect life in place of our sinful lives. That was why He let the cruel soldiers nail Him to the cross, lift it, and drop it into the hole that had been dug for it between two other crosses.

The men on those other crosses were thieves. They probably fought the soldiers as they were put onto their crosses. But what did Jesus do? Luke 23:32-37.

Was Satan tempting Jesus to give up? Yes. This was his last chance to prove his lie—that it is impossible for humans to obey God’s law.

“No one believes in You!” he might have said. “Your disciples fell asleep when You wanted them to pray. Then they ran away and left You alone with the mob. God the Father hates sin so much that He has left You. You won’t ever rise from the dead or go back to heaven.” 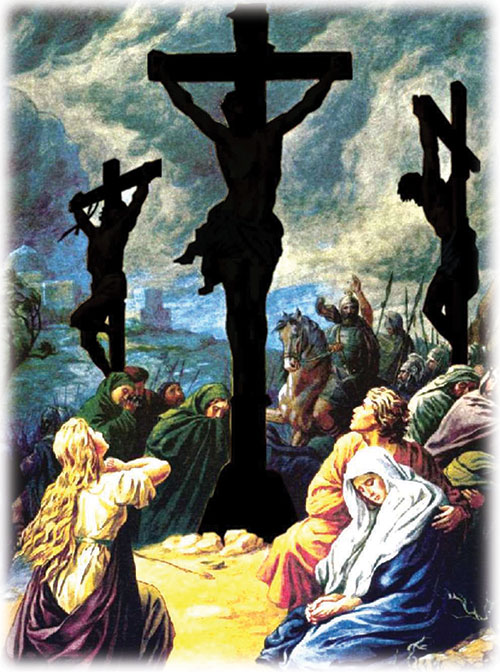 If we accept Jesus’ suffering for us, and choose to love, trust, and obey Him, He can give us His perfect life in place of our life that isn’t perfect at all. We have all done many wrong things. Oh, how much Jesus loves you and me and everyone!

Many people watched Jesus that sad Friday afternoon. Those passing by could read the sign attached to the top of His cross. What did it say? John 19:19-22.

It had been many hours since Jesus had food or water, and He was very thirsty. People who were crucified were usually allowed to drink some wine with a drug that helped make the terrible pain a little less; but when it was offered to Jesus, what did He do? Matthew 27:34.

Jesus knew that alcohol and drugs keep us from thinking right. He knew that He must not let anything keep Him from choosing to follow every part of the plan to save us from Satan.

Then Jesus heard the thieves on the crosses beside him. They had been watching Him, and one of them was convinced that He was truly the Son of God, the Messiah. What he said to Jesus was like a bright flash of hope darting into the terrible, dark, thoughts that Satan was trying to force into His mind. Luke 23:39-42.

Gladly Jesus answered the thief. “I can tell you right now that you will be with Me in heaven some day.” That was what Jesus’ answer meant. Luke 23:43.

Jesus had been on the cross since about nine o’clock that Friday morning. Mark 15:25. What happened three hours later? Matthew 27:45.

In that thick darkness, Jesus felt all alone. Satan was trying desperately to get Him to finally give up the plan to save us. And no angel was permitted to help Him now. “Your Father has left you forever.” Satan told Jesus over and over. And that was just how Jesus felt. What did He loudly cry out? Matthew 27:46.

But even though Jesus felt that He was forsaken, He did not give in to His feelings. He chose to trust His heavenly Father no matter how He felt or what happened to Him. Satan probably kept on with his fierce temptations as long as Jesus was alive. It usually took many hours for a crucified person to die. But Jesus had been on the cross only about six hours, when His great heart of love broke. Luke 23:46.

In the temple, not very far away, there was a loud, tearing sound at the moment Jesus died. People were horrified as the huge curtain between the Holy Place and the Most Holy Place suddenly tore apart from the top to the bottom. God was showing that the sacrifices of lambs weren’t needed anymore. The true Lamb of God had just died. But only one person seemed to know that. Mark 15:38, 39.

The friends of Jesus were sobbing. He was dead; their hopes of a wonderful kingdom were gone. They didn’t want to think of what would happen when the soldiers roughly took Jesus’ body down from the cross. They were much too poor to give Him a proper burial. Then two men came to help them. How grateful Jesus’ mother, His disciples, and His friends must have been. John 19:38-42.

Many others besides Jesus’ friends were sad because Jesus had died. People who wanted to see Him at the Passover feast were very disappointed. But some other people, who thought that they would be happy when Jesus died, were very worried. And so was Satan. The priests and rulers remembered Jesus’ promise to rise again the third day, even though the disciples had forgotten it. So what did they ask Pilate to do? Matthew 27:62-66.

After Sabbath had ended, and before the sun came up on Sunday morning, an angel came flashing down from heaven. He rolled the huge stone away from the opening to the tomb, and he called to Jesus. It was time for Him to wake up. The angel was so bright, the guards around Jesus’ tomb fell to the ground as if they were dead. Matthew 28:1-4.

Jesus could now use His power as the Son of God again, so He got up and came out of the tomb. Only the scars in His hands, feet, and side showed what terrible things had been done to Him. 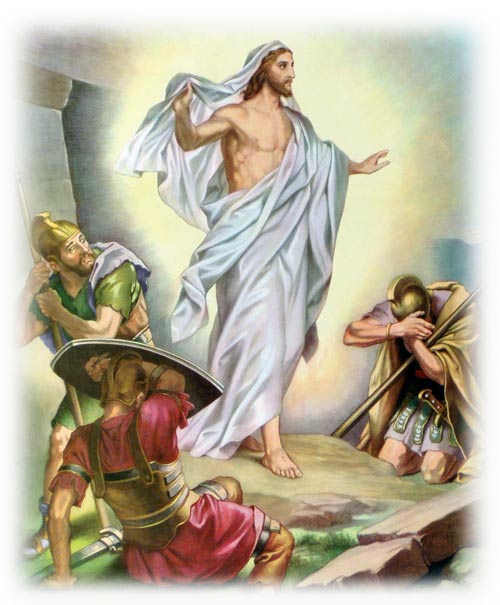 The terrified guards saw it all. They rushed toward the city to tell Pilate what had happened, and on the way they told everyone else they met. But before they got to Pilate, someone hurried to tell the priests, who quickly told the soldiers to come to them. They paid them money to lie about what happened, and they promised to keep them out of trouble. What was the lie? Matthew 28:11-15. 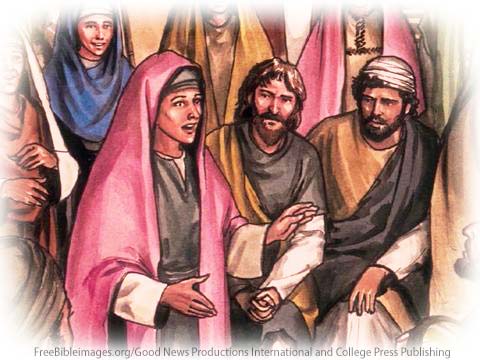 Mary Magdalene was the first of Jesus’ friends to see the empty tomb. Right away she ran to tell Peter and John, and then those two disciples ran to see if what Mary said was really true. John 20:1-8.

Angels looking like young men dressed in white had stayed at the tomb to let Jesus’ friends know that He truly had risen. Jesus Himself spoke to Mary when she came back to the tomb. What did He say to her that tells us that He didn’t go to heaven when He died? John 20:11-18. 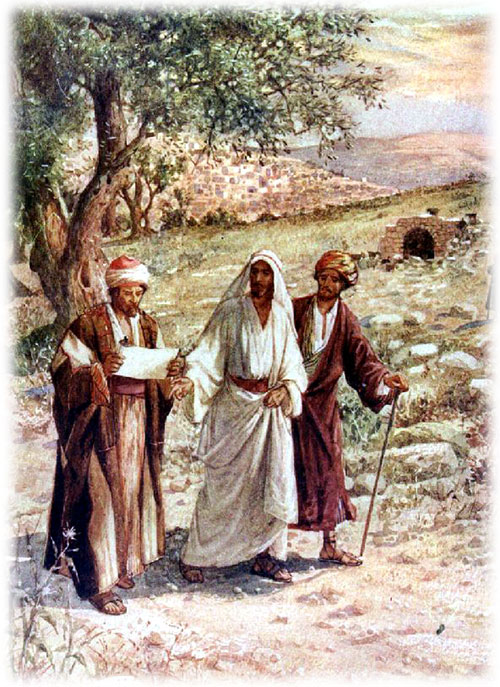 Jesus knew that there were still many things His disciples didn’t understand about why He had become a human and had come to our world. They didn’t understand the wonderful plan that had been made to save our world from Satan. So. Jesus kept on teaching them after He came out of the tomb on Sunday morning.

Late that Sunday afternoon, two of Jesus’ disciples were walking along a rough, stony path to their home in the little village of Emmaus, several miles from Jerusalem. What were they talking about, and who joined them? Luke 24:13-24.

Then Jesus went all the way back to the prophecies of Moses, and explained to them how the prophets had told about Jesus’ coming to die for us. The sanctuary, all the beautiful things in it, and all the sacrifices of lambs were to help people understand that Jesus, the true Lamb of God would die in our place. John 20:25-27.

As Jesus explained these things, the two disciples were amazed and thrilled. They could see that everything the Stranger was telling them was true. As they came close to their home, Jesus acted as though He were going on, but the disciples wanted to talk some more. What happened when they urged Him to stay with them? John 20:28-32.

Those dear disciples couldn’t wait to get back to Jerusalem to share the amazing news. They hurried to that upper room where they knew they would find the other disciples. And even though they couldn’t see Him, Jesus entered the room with them. When He suddenly appeared, you can imagine how surprised everyone was. Again, Jesus explained that everything that had happened to Him was just as God had told His people through His prophets. John 20:33-35.

After Jesus came out of the tomb, an angel asked some of the women to tell His disciples and Peter that He would meet them in Galilee. Mark 16:7.

Peter was mentioned by name because Jesus knew how terribly he was feeling about saying that he didn’t even know Jesus.

When Peter and six other disciples arrived in Galilee, Peter decided to go fishing; and the other disciples said they would go with him. They all needed money, and this was a good chance to earn some. How many fish did they catch that night? John 21:3.

As it became daylight, the seven tired, discouraged disciples started back to shore. At first they didn’t recognize the Person standing on the shore watching them. Then they realized who He was. John 21:4-8. 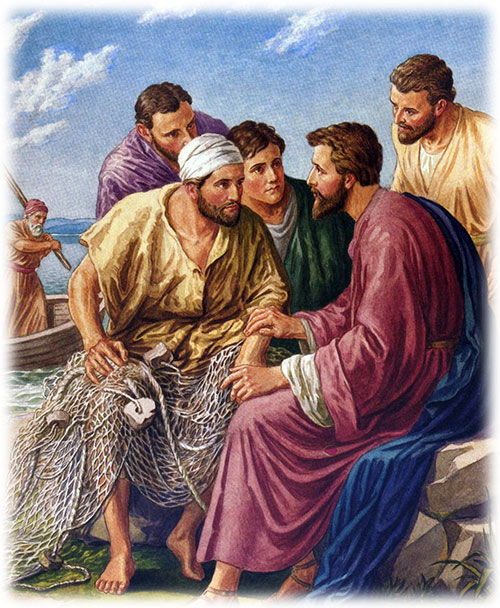 Jesus had breakfast all ready for His hungry disciples. John 21:9-14.

After breakfast, Jesus asked Peter a question right in front of the other disciples.

As He told Peter what He wanted him to do, Jesus asked the same question two more times. What was the question, and how did Peter humbly answer Jesus? John 21:15-17.

Three times Peter had pretended that he didn’t know Jesus, and three times Jesus’ questions gave him a chance to say that he loved Jesus. Jesus was letting Peter and the other disciples know that He had forgiven Peter, and that Peter had truly learned a hard lesson. Jesus wanted His disciples to know that He was still depending on them to be strong leaders for Him.

How grateful Peter was! He knew that he didn’t deserve to be a worker for Jesus after the terrible way he had acted that night. Really, none of the disciples deserved to be trusted anymore, did they? They had all run away just when Jesus needed them.

The story of Peter helps us know how wonderful Jesus is. When we do something wrong, Jesus still loves us; and when we are truly sorry, He always forgives us. Many times we suffer from the results of the wrong things we have done, but Jesus never stops loving us.

Most people don’t really understand what killed Jesus. It wasn’t the cruel nails, the crown of thorns, or the whippings. It was the terrible load of our sins that actually killed Him. Will you tell Jesus right now that you are thankful for giving Himself to die for you?