"For You, Lord, are good, and ready to forgive, And abundant in mercy to all those who call upon You." –Psalm 86:5 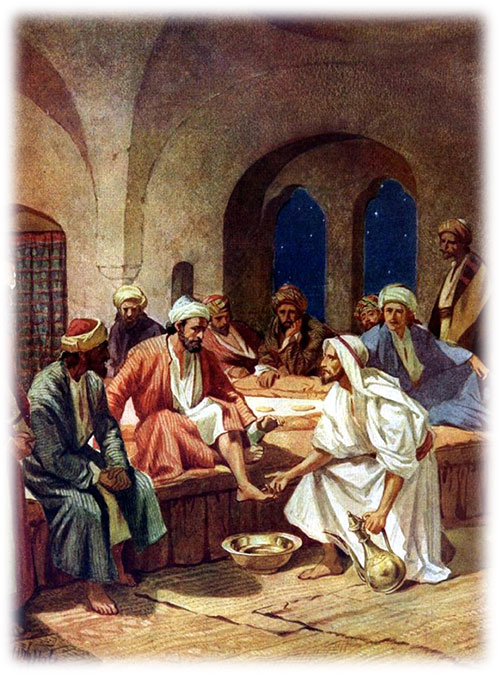 NOTE: Matthew, Mark, Luke, and John each tell about what happened in our story this week. By putting a marker in each of them, you can easily find the different things they tell.

On Thursday evening, just four days after Jesus rode into Jerusalem on a donkey, He and His disciples went to an upstairs room of a home in Jerusalem to eat a special meal together. Why was the meal special? Who prepared it? What did Jesus say about it? Luke 22:7-16.

Jesus knew the selfish, jealous thoughts His disciples were thinking. Each of them wanted to be the greatest in the kingdom that they were sure He was going to start soon. Jesus watched them trying to get the seats closest to Him. Also, He knew they had noticed that there was no servant to wash their feet before they ate; but they were acting as if nothing were wrong. Luke 22:24.

Jesus felt sad that the disciples were too proud to do a servant’s job. Quietly He got up from the table and started washing their feet Himself. The disciples were shocked and ashamed. What did Peter say when Jesus came to wash his feet? John 13:3-9. 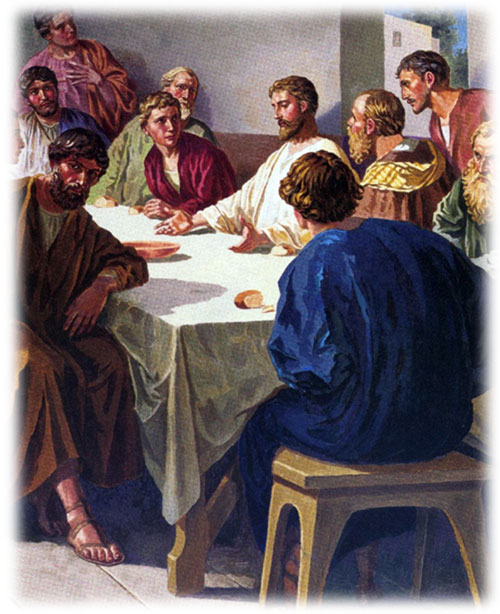 Jesus was saying that baptism is like taking a bath. If we get our feet dirty after taking a bath, we don’t have to take a bath again just to get our feet clean. Being baptized is like a bath that shows that we are trusting Jesus to take away our sins and make our hearts clean. We don’t need to be baptized again every time we forget and do something wrong. Foot-washing reminds us to be humble, and to let Jesus give us clean hearts again. John 13:10.

By the time Jesus finished washing His disciples’ feet, they were ashamed and humble—all except one. Who was that one? John 13:11, 21-26.

Jesus was starting a new ceremony that night. We call it communion. First there is the foot-washing. Then there is the Lord’s Supper, which took the place of the Passover supper. After Jesus died, no more Passover lambs needed to be sacrificed to remind people that He would die in our place. The new ceremony would remind us that Jesus has already died in our place. It is a wonderful reminder. 1 Corinthians 11:23-26.

When Judas left the Passover supper that Thursday night, he went to the priests and rulers again to help them plan how to arrest Jesus. And Jesus knew that would happen that very night. He also told His disciples that they would forsake Him, too. Then they went to a garden named Gethsemane. Mark 14:26-31. 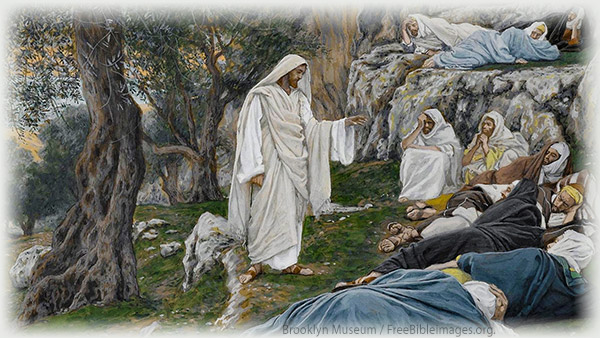 After Jesus left most of his disciples near the entrance to Gethsemane, He took Peter, James, and John farther into the garden, and then He went even farther to pray. No one can really understand, or even imagine, what was happening to Jesus that night. He wasn’t praying like He did at other times in the garden. He fell on the ground as if he were carrying a huge, heavy load. And He was. He had come to take the terrible load of guilt that sin has brought on all of us. And the terrible feeling made Him sob and groan as He prayed all alone to His heavenly Father. Mark 14:32-36.

The disciples had bragged about how much they loved Jesus; but even though they tried to pray, they couldn’t stay awake. They didn’t understand what was happening to Jesus. They didn’t know how terribly hard Satan was tempting Him. Mark 14:37-40.

Why was Satan so desperate to get Jesus to change His mind about dying in our place? Because he knew that unless he could do that, he would lose the war that he had been fighting against Jesus for so many thousands of years. And in the end, he, Satan, would be destroyed forever. But if Jesus chose not to die in our place, Satan would win. Then you and I, and everyone else who has ever lived would have to die forever. No humans would ever be in the kingdom of God. We would all be lost forever!

Was Jesus human? Yes, He was. Was He also our great Creator God? Yes, He was. But from the time that Jesus became a man He had never used His power as the Son of God to make it easier to be human. Satan thought that no human would choose to be tied and taken by rough soldiers from place to place. No human would choose to be beaten with cruel whips that made deep cuts all over his back, be spit on, and have a crown of sharp thorns pushed down on his head. No human would choose to have all his clothes taken off, have big nails driven through his hands and feet, be hung on a cross, and die there with crowds of people staring at him. Jesus knew that all those terrible, cruel things would happen to Him. Yet He loves us so much that He was willing to let all that happen so He could save us from wicked, cruel Satan.

But, most of all, Satan doesn’t want people to understand that it was not all those terrible things that made Jesus suffer most.

We have all felt guilty for bad things we have done. Some people have even killed themselves because they couldn’t stand their terrible feelings of guilt. But Jesus felt the awful guilt of all the sins that people have done since the beginning of our world. And Satan was tempting Jesus so fiercely that instead of just sweat coming out of His pores, blood came out with the sweat. Luke 22:44.

No wonder Jesus was begging His Father to please find some other way to save us. But there was no other way. So Jesus kept on choosing to follow the only plan that could save us.

Two times Jesus staggered back to His three sleepy disciples and begged them to pray. But they were sound asleep each time. What did He say to them when He went the third time? Mark 14:41, 42.

Judas was the betrayer, and he knew where to find Jesus that night. He came with soldiers and a mob of people, and they said they were looking for Jesus.

When Jesus said, “I am He,” all of them, including Judas, backed away and fell to the ground. They must have seen the brightness of an angel passing between them and Jesus. That same angel that had come from heaven to give Jesus more strength must have still been there in the garden. John 18:2-6.

Maybe some of the soldiers didn’t know Jesus; so Judas said he would kiss the Man they were to capture, and he did. Mark 14:44-46.

When the disciples saw that the soldiers were going to tie Jesus’ hands, they wanted to stop them. Peter even pulled out his sword and struck at the servant of the high priest. But all that did was cut off the man’s right ear. John 18:10.

Jesus told Peter to put his sword away. He didn’t need swords to defend Him. He could have called thousands of angels to protect Him, but that would have spoiled the plan. Matthew 26:52-54.

Earlier that same night, all the disciples had said they would die with Jesus rather than deny him. But when they saw Jesus letting the mob take Him and tie His hands, what did the disciples do? Matthew 26:35; Mark 14:50.

Then the rough soldiers took Jesus to the home of Annas, the father-in-law of Caiaphas, the high priest. Annas knew that if He could get Jesus to say that He was the Son of God, their council would decide that He should die. If he could prove that Jesus was secretly trying to start a new kingdom, the Romans also would say that He should die. Jesus politely told Annas that He had never done anything in secret. John 18:12, 13, 20, 21. 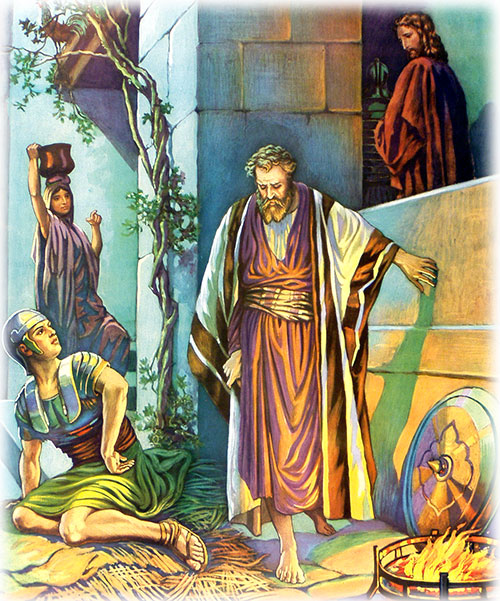 It was still night when Jesus was taken next to Caiaphas, the high priest. Read about what happened there. Mark 14:53-65.

After running away in Gethsemane, Peter and John had gone back and followed the mob that was taking Jesus from place to place. John stayed as close to Jesus as he dared; but Peter stayed in the courtyard, pretending that he didn’t even know Jesus. John 18:15, 16. Luke 22:55-62.

That kind, loving look from Jesus broke Peter’s heart. He was sobbing as he rushed alone into the night. How terribly he had disappointed Jesus! He had even cursed and sworn to convince people that he didn’t even know Jesus. Mark 14:71.

Judas also had followed Jesus from Gethsemane, anxiously watching and listening to everything that was happening. He still had the thirty pieces of silver that the priests had given him for betraying Jesus. That was the same price that people paid for a slave. He had thought that Jesus wouldn’t allow the soldiers to take Him. And even there at the council meetings, he kept expecting Jesus to free Himself at any moment. But when he saw that Jesus was going to let Himself be crucified, he couldn’t stand the thought of the terrible thing that he had done. Suddenly he pushed through the crowd and rushed up to Caiaphas. Then what did he do? Matthew 27:3-5.

Next Jesus was taken to Pilate, the Roman governor of Judea. Pilate could tell at once that Jesus was innocent, but he also knew that the Jewish leaders were determined to put him to death. As soon as he heard that Jesus was from Galilee, he decided to send Him to Herod, king of Galilee. Luke 23:1-7. 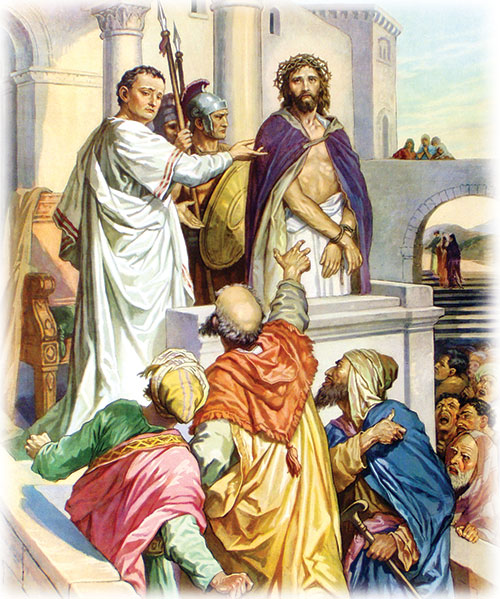 Herod was the same wicked king who had put John the Baptist to death. For a long time he had wanted to see Jesus and watch Him work a miracle. But did Jesus do miracles just to please wicked Herod and to save His own life? No. So Herod sent Jesus back to Pilate. What did the Roman governor tell the priests and rulers? Luke 23:8-16.

Because Pilate knew that Jesus was innocent, and that the Jewish rulers were being hateful and jealous, he decided to try once more to save Jesus’ life. Matthew 27:15-19.

Anyone looking at Jesus and wicked Barabbas standing side by side could tell which was innocent and which was guilty. Barabbas was a murderer; Jesus had never done one wrong thing in His life. But even though they knew that He was innocent, the priests and rulers were still determined to get rid of Jesus. Matthew 27:20-23; John 19:15.

Pilate didn’t want to crucify Jesus, but he didn’t have enough courage to go against what the Jewish leaders wanted. And when he saw that they might complain to Caesar, the Roman emperor, he was afraid that he would lose his job. How sad! Matthew 27:24; John 19:12.

It was Friday morning when Jesus was led away to be crucified. He hadn’t slept since Wednesday night, and He probably hadn’t had anything to eat or drink since Thursday evening. Also, He had lost blood from the terrible beatings. As He tried to carry His heavy cross, He fell. The soldiers must have known that Jesus was really too weak to carry it, so what did they do? Mark 15:21.

It’s important for us to remember that Jesus felt the guilt of every person who ever lived, and He died to save each one. That includes you. This week, will you spend some time each day thinking about what Jesus has done for you, and ask Him to help you live for Him?