"Do not be deceived: God cannot be mocked. A man reaps what he sows." –Galatians 6:7 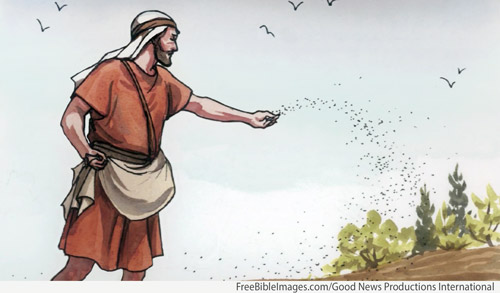 Jesus told stories to help people understand how to be in God’s kingdom. One of them was about a farmer sowing seed in his field. As Jesus talked He was sitting in a boat on the lake, and a big crowd of people were on the shore. As they listened, they could see a farmer sowing seed on the hillside. Read the story that Jesus told them. Luke 8:5-8.

Food, flowers, plants, and trees all grow from seeds. The seeds in this story are all the wonderful things Jesus has taught from the very beginning, and we can read them all in the Bible. Luke 8:11. 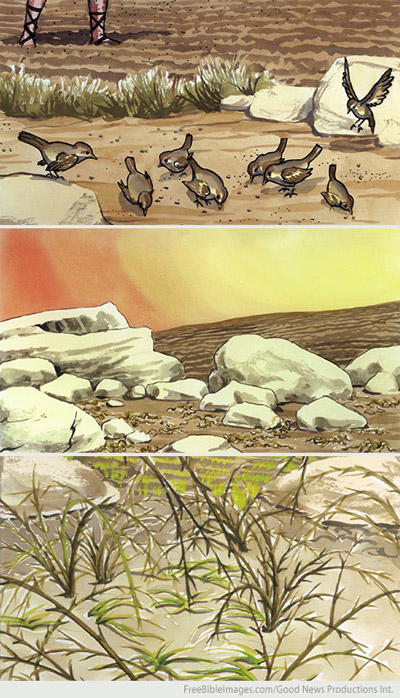 Roads and sidewalks are hard, aren’t they? Birds can easily snatch away any seeds that fall there. When you are not listening to what your parents are saying, do they ever tell you to “pay attention”? Not paying attention to the Bible, or keeping others from paying attention, is like choosing for our minds to be like hard ground. That makes Satan happy, but it makes Jesus sad. Luke 8:12.

The rocky ground and the thorny ground are like people who know that the Bible is true. At first, they want to obey Jesus. But soon, they decide that it’s too hard to change bad habits; or they decide that obeying isn’t really important; or perhaps they choose to obey Satan’s temptations, and do things that he tells them are fun. Often, they let themselves get too busy; they don’t take time to keep learning about Jesus, and asking Him to help them obey Him. Then, of course, they stop growing more like Him. Luke 8:13, 14.

The good ground is like people who take time to listen to Jesus and choose to obey Him. As they learn more about Him from the Bible, they become more like Him. And they help other people learn about Him, too. Isn’t it wonderful that we can choose to let Jesus help our minds become like the good ground? Luke 8:15.

The people had seen houses like those that Jesus was telling about. Some of those that were built on solid rocks were hundreds of years old. Winds and rains and floods had not destroyed them. The people who had built them had to work hard. They had to climb up steep places as they carried things to build with. But it was worth all their hard work, because their houses were safe and strong. Matthew 7:24, 25.

From where the people were listening to Jesus, they could look down into a valley where people had built cheap houses on sandy soil. They knew that it hadn’t taken very much work to build there. But when the rains came, rivers of water rushed down from the mountains. Soon the sandy places where the cheap houses had been built were flooded. You can easily imagine what happened to those houses. They fell apart, and probably many people lost their lives. Matthew 7:26, 27.

When Jesus stopped talking, and the people went back to their homes, they had lots to think about. Matthew 7:28, 29. 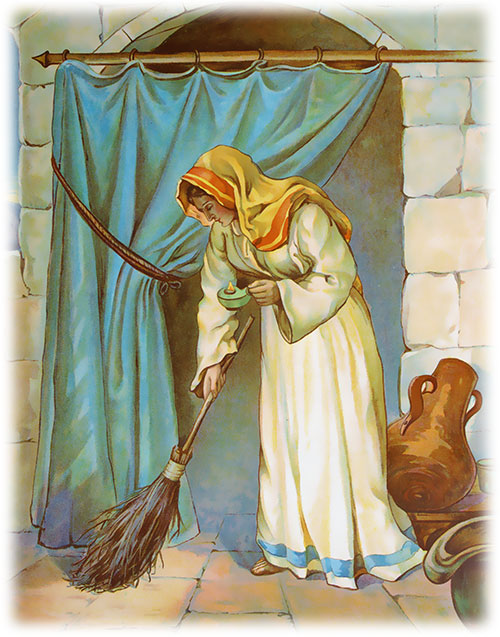 Jesus was talking about what kind of characters that we choose to build, wasn’t He? Building our characters on what we are learning from Jesus is like building on strong rock. 1 Corinthians 3:11.

Jesus told three stories that were about lost things and lost people. One story was about a woman who had lost a silver coin. Her mother had given her ten silver coins when she got married, and they were very precious to her. But when the woman counted them one day, she found that one of her coins was missing. She felt terrible.

At once the woman started looking for her precious lost coin. She lit a lamp and looked carefully in the closets, on shelves, and under things. She swept every corner of her house, carefully watching and sorting through the dust and dirt. Luke 15:8.

Perhaps a neighbor lady came by; and when she found out what had happened, she probably told other neighbor ladies. Each of them had their own ten silver coins because it was the custom for mothers to give their daughters those coins when they married. They all knew how precious they were, and they felt very sorry for their worried neighbor.

Finally the woman found her lost silver coin. No doubt she quickly cleaned and polished it. And she was so relieved to have all the pieces together again, she hurried to tell her neighbors. “I found my coin! Come! Let’s celebrate!” Luke 15:9.

Can you tell some ways that we can help to find lost people?

Jesus told a story about a shepherd and a lost sheep. The shepherd had 100 sheep; and at night he kept them in a sheepfold, where they would be safe from wild animals and thieves. One evening, as the sheep went past him into the sheepfold, he counted them one by one. He counted up to 99, but there were no more sheep. One was missing. He probably counted them again, just to make sure. But sure enough, one was missing.

The shepherd didn’t have to wait to decide what to do. Even though he was tired after caring for the sheep all day, and even though he could see that night was coming, he quickly locked the sheepfold gate so the 99 sheep would be safe, and then he hurried to look for his missing sheep.

Lost sheep don’t know how to find their way back to the flock or to the sheepfold, so finding his sheep wasn’t easy. The shepherd was tired, and the wind and rain beat on him. He had a lantern; but as he hurried, he stumbled on rocks, and got caught in thorns. He knew that there were wild animals near by, and he knew that his poor sheep must be terrified. Over and over he called his sheep’s name, and he listened for it to bleat in reply. But there was no reply.

Finally the shepherd heard a faint “Baa.” He knew that his sheep was trying to answer, and he hurried as fast as he could in the direction of the sound. Then, at last, he found it. 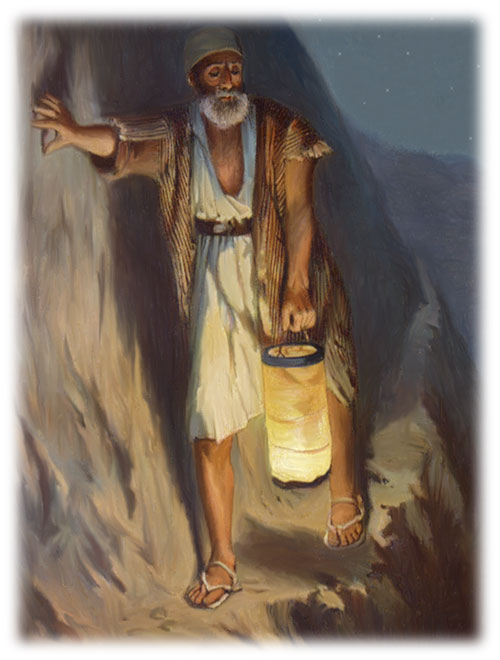 The shepherd knew that his sheep had become lost because it had strayed away. It hadn’t followed the shepherd and the flock. Did he punish the lost sheep with his shepherd’s rod? Did he drive it ahead of him all the way back to the sheepfold? No. Read the story to see what the shepherd did. Luke 15:1-7.

The lost sheep was like people who know that they are sinners, and that they are lost; but they don’t know how to find Jesus, our loving Shepherd. The scribes and Pharisees, who were very sure of being in God’s kingdom, were really as lost as the coin that didn’t know it was lost. But God loves people who are like lost sheep and lost coins.

Another story that Jesus told was about two lost boys. They were brothers, and their father was very rich. The boys knew that when their father died, all his riches would be theirs.

Then the younger boy thought of a plan. He would ask his father to let him have his share of his money before he died. Luke 15:12. When his father agreed, the boy was happy, of course. But the father was sad. He could see that his son didn’t appreciate the nice home and loving care that his family had always given him. It was hard for the father to watch him go off down the road, smiling and waving good-by. He knew that his son would go far from home so he could have fun without anyone bothering him. Luke 15:13.

At first, the boy had lots of friends, and they had lots of fun together. But when his money was gone, so were his friends. He had never learned to work, so he couldn’t find a good job to earn more money; and when there was a terrible famine, he was really in big trouble. What did he finally do? Luke 15:14-16. 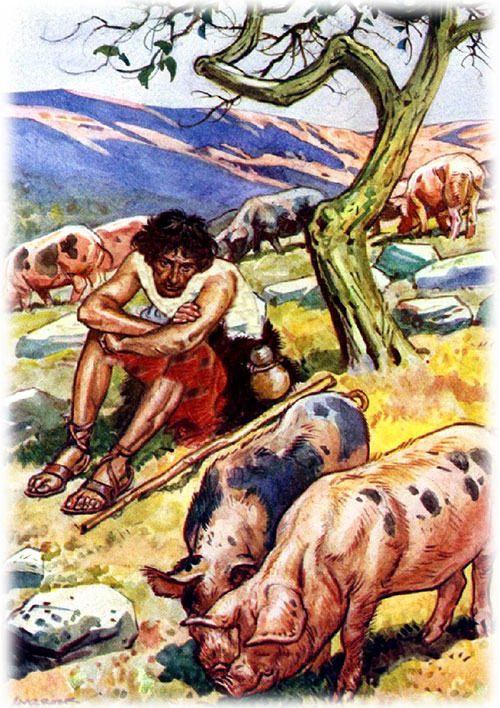 “But” is the first word in the next text. What is the beautiful ending to the part of the story about the younger son? Luke 15:17-24.

Was everyone happy that the younger son had finally realized how foolish he had been? Luke 15:25-32.

We don’t know whether the older son ever changed his mind. He was proud that he had always been a “good” son. Like most proud people, he probably didn’t know that he was proud, and being proud is the worst kind of sin. He was like people who think that others are sinners, and that they have earned the right to be in heaven. But can anyone do that?

In the days when Jesus was on earth, people sometimes hid treasures in the ground so thieves and robbers wouldn’t find it. They were careful not to tell other people just where their treasure was; and sometimes, after the one who owned the treasure died, it was still buried, because no one knew where to look for it.

One day Jesus told a story about a man who was plowing in a field that he had rented. Suddenly his plow hit something hard. It wasn’t just a big stone; it was a treasure. When the man saw it, he knew that it was worth more money than he had ever dreamed of owning. Quickly the man put the dirt back over the treasure. He knew at once that he must buy that field so the treasure would belong to him. When he found out how much the field cost, he knew that his family must sell everything they owned so they would have enough money to buy the field. And that is what they did.

After paying for the field, the man carefully dug up the treasure. When the family saw what had been buried there for so long, they didn’t care that they had sold everything. Now they were very rich. Matthew 13:44.

Jesus said that our real treasure is the kingdom of God. To be in that kingdom, we must be willing to give up everything that belongs to Satan’s kingdom. Nothing can be more important than choosing to love and trust Jesus, who will help us obey and become like Him. John 17:3; Matthew 19:29.

The people didn’t know that they could be in Satan’s kingdom without even knowing it. They wanted a king who would free them from the Romans, but Jesus didn’t offer them that kind of kingdom. In the end, everyone who stays in Satan’s kingdom will die forever. Jesus wants to free us from Satan; then we can live with Him forever in His wonderful kingdom. Matthew 25:34, 41.

Every story Jesus told helps us understand how very much God loves every one of us and wants us to be in His kingdom. And once we belong to Jesus, we can tell others about our wonderful friend Jesus. Do you want to tell your friends, too?