Jesus Shows His Love for Everyone

"Enter his gates with thanksgiving and his courts with praise; give thanks to him and praise his name. For the LORD is good and his love endures forever..." –Psalm 100:4-5 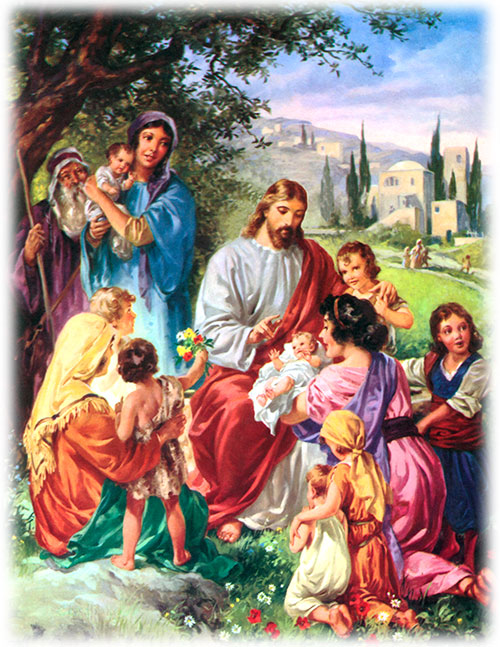 Jesus loved children, and children loved Jesus. He was never too busy to listen to them, tell them stories, and hold them on His lap. No wonder mothers loved to bring their children to Jesus so He could bless them!

The disciples thought that children were bothersome. They couldn’t understand why Jesus liked to spend time with them, especially when so many grownups needed Him and wanted to listen to Him.

One day several mothers got together and brought their children to where Jesus was talking to a crowd of people. When the disciples saw the mothers and children coming, they tried to drive them away. But Jesus saw what the disciples were doing, and He quickly let them know that they were not pleasing Him. What did He say to them? Mark 10:13-16.

Those mothers were very thankful as they went back home; and the disciples learned an important lesson. Do you think that those children ever forgot that happy day?

In the crowd that listened to Jesus and watched Him bless the children, there was a very rich young ruler. He wanted Jesus to bless him like He had blessed those children. As Jesus and His disciples started down the road, the young ruler ran and caught up with them. What did he and Jesus say to each other? Mark 10:17-19. 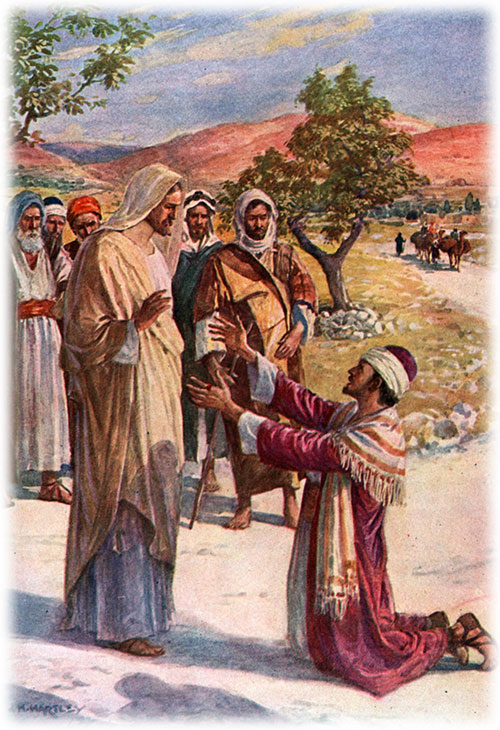 What Jesus said next made the young ruler realize something that Jesus already knew. He loved his riches more than he loved God or other people. If he truly wanted eternal life, he must choose to love God more than anything else. What was the rich young ruler’s choice? Mark 10:21, 22.

How sad! But are we all naturally selfish? Yes, we are. What are some other things that can be so important to us that we could be choosing them instead of choosing eternal life?

In our story yesterday, we learned about a rich young ruler who wanted eternal life. But when Jesus told him what he must do, he was sad; and he walked away. Then Jesus turned to His disciples and said something that surprised them very much. Mark 10:23-25.

The disciples could hardly believe what Jesus was saying. They had been taught that being rich showed God’s special blessing. They didn’t realize how easy it is for rich people to trust in their riches instead of trusting in God. Jesus knew that ever since sin came, it is natural for humans to be selfish. Only God can help us be unselfish. Mark 10:26, 27. 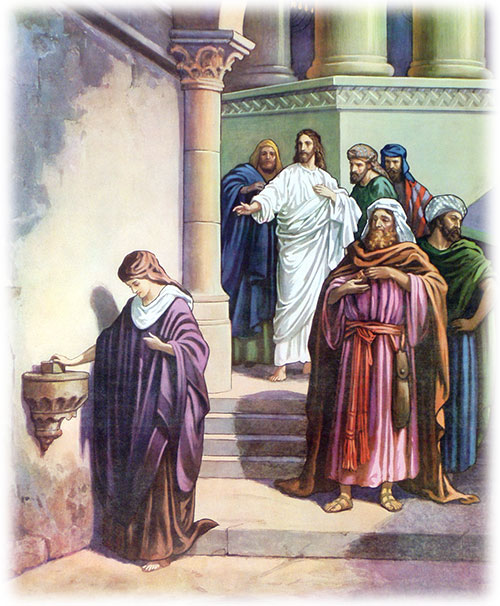 Peter reminded Jesus that he and the other disciples had left everything in order to be with Him. Jesus told them that in heaven they would have much, much more than anything they had given up to become His disciples. Mark 10:28-30.

Later, when the disciples were with Jesus in the temple one day, He helped them understand what is more important to God than riches. They were watching as people were bringing their offerings to the temple. When rich people came in, some of them proudly made sure that everyone could see what large offerings they were giving.

As Jesus and the disciples watched, He told them to notice a shy widow who was quietly waiting to put her offering into the special holder. She was very poor, and she was embarrassed that she had only two little coins. But she loved God so much, she wanted to give them to Him. Finally, when she thought no one was looking, she quickly dropped the coins into the offering holder; and turned to hurry away. What did Jesus say about her offering? Luke 21:1-4.

No one remembers the rich people who gave their offerings that day. But the story about the unselfish widow has helped many thousands of people choose to be unselfish, too.

Leprosy is a terrible disease; people who have it are called lepers. When Jesus was here, lepers had to stay away from people. They weren’t supposed to go into towns or villages for fear of getting too close to other people. And when people came near them, the lepers had to call out, “Unclean! Unclean!” to warn them to keep away. There was no cure for leprosy. People thought that lepers were such terrible sinners that God no longer loved them and that He wouldn’t forgive them.

The Bible tells a story about ten lepers. Some of them were Jews, and some were Samaritans. Even though Jews and Samaritans didn’t like each other, the ten lepers thought that since there was no hope for them, they might as well be friends and stay together. When they heard about Jesus and that He had cured even leprosy, what did they decide to do? Luke 17:11-13.

Jesus stopped. He looked over at the lepers, and He pitied and loved every one of them. He knew that only a priest was allowed to decide whether or not someone was cured of leprosy. He also knew that the lepers had faith that He could cure them. What did He say to them, and what did the lepers do? Luke 17:14.

All ten lepers were cured. Their terrible leprosy was gone. How wonderful! Now they could be with their families and other people again. How excited they must have been as they hurried off to show themselves to the priests! But one of them went back to see Jesus. Why? Luke 17:15, 16.

Jesus must have felt glad and sad at the same time. What did He say about the other nine lepers who didn’t come back to thank Him for what He had done for them? Luke 17:17, 18.

Do you have many things for which to thank Jesus? Can you tell about at least ten things? Do you remember to thank Him every day? When you pray or thank Him at mealtime, do you think of what you are saying, or do you rush through the words without really thinking about them? How can you show that you are truly thankful for all that Jesus has done and is doing for you? 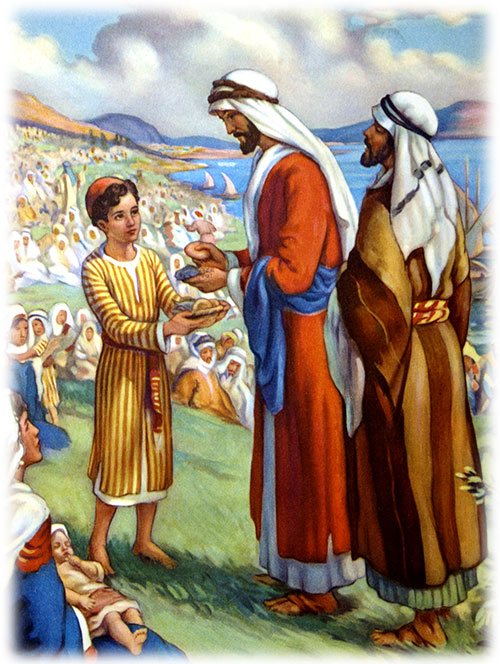 One day Jesus was talking to a large crowd of people. Many of them were on their way to the Passover Feast in Jerusalem. More and more people joined them until there were 5,000 men, besides women and children. They were all so interested in the wonderful things Jesus was telling them that they didn’t even think about the time, or that they hadn’t had anything to eat all day.

We don’t know the name of the unselfish little boy who offered to share his lunch. Perhaps he hoped it would be enough for Jesus’ supper; but in the end it was enough for everyone’s supper, and there was lots left over. John 6:8-13.

The people were so amazed and excited about what had happened that they wanted to make Jesus king right then and there. And that was just what the disciples wanted, too. They were not at all happy when Jesus told them to get into their boat and leave. John 6:14, 15. Mark 6:45.

It was easy to see that no one understood that Jesus’ kingdom was not at all like the one they wanted. Jesus didn’t come to our world to lead armies against the Romans. He came to fight against Satan and to help people be free from him. He would die in our place and help all those who would choose to trust and obey Him. By His power we can be ready to live in His wonderful kingdom forever.

After feeding those thousands of people with the little boy’s lunch, Jesus sent the disciples away in their boat. He sent the people away, too. Then what did He do? Matthew 14:22, 23.

As the disciples rowed across the lake, they were probably grumbling because Jesus had not let the people make Him king. But when they were in the middle of the lake, something suddenly happened that made them forget their grumbling. Matthew 14:24.

Jesus loved His disciples. He had been watching them, and He could see them struggling to keep their boat from sinking. He knew how much they were wishing that He were there to save them. What did He do? Matthew 14:25.

Now the poor disciples were really terrified. “It’s a ghost!” they screamed. “What shall we do?”

Jesus quickly called back to them, “It is I, don’t be afraid.”

As Peter heard the howling wind and saw the huge waves, he was afraid and he started to sink. “Lord, save me!” he shouted.

Jesus reached out His hand and caught him, and together they climbed into the boat. Then what happened? Matthew 14:30-32.

After the wind stopped, the boat gently rocked on the water as the disciples knelt reverently around Jesus. They knew that He was human, but He was more than that. He was truly the Son of God as well. Matthew 14:33.

Jesus is still a human person, and at the same time He is still the great Creator God. He wants us to always choose to totally trust and obey Him, no matter what happens. When we do that, we are perfectly safe.

The disciples needed to learn so many things from Jesus, and so do we.

One person that they knew about had done the same wrong thing seven times, and Jesus still forgave her. In the end, she was so thankful that she became one of Jesus’ most faithful disciples, and she never did that wrong thing again. As Peter thought about how Jesus forgave people, one day he asked Jesus a question. Matthew 18:21.

Maybe Jesus smiled as He listened to Peter. He knew that Peter was trying to be more like Him. How did Jesus answer his question? Matthew 18:22.

Peter and the other disciples must have been shocked. Seventy times seven? That would be 490 times. Anyone would forget the count before forgiving someone that many times. They could tell that Jesus was really saying that we should never stop forgiving. Besides, God can forgive us only as we are willing to forgive others. Matthew 6:14, 15.

Then Jesus told a story that helped them remember how important it is to forgive others when they do something wrong to us. Read the first part of the story in Matthew 18:23-27.

As that servant left the king that day, he must have been very relieved and happy. He could never have paid back all that money. In today's money, it would be millions of dollars. Besides, how could he earn anything if he were in jail? Now read the rest of the story. Matthew 18:28-35.

We should never forget this story. How terribly sad it would be to miss being in heaven because we had never learned to truly forgive others like Jesus forgives us!

We want Jesus to help us be forgiving of other people who do unkind things to us; and we want Him to help us be truly thankful for every good thing He gives us. Every day this week, try to think of kind things people do for you and thank them!

My Bible First - Lesson 19 - "Jesus Shows His Love for Everyone"