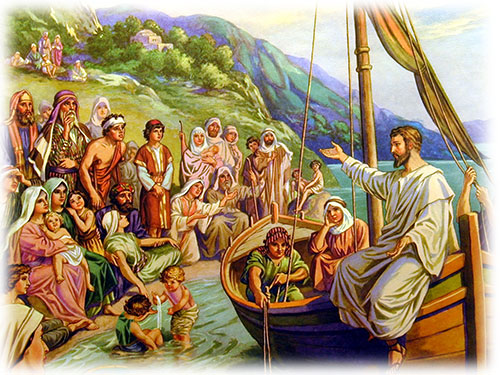 Several of Jesus’ special disciples were fishermen, and night was the best time to catch fish. The fishermen rowed their boats out on the beautiful Sea of Galilee, which is actually a large lake. Then they let down their nets; and when the nets were full, they spilled the fish into their boats. When daylight came, they rowed their boats back to the shore.

Early one morning Jesus went to the lake shore to be alone for a little while before the crowds of people came to Him. Four of His disciples were in their boats on the lake, and they were tired. They had worked hard all night, but they hadn’t caught any fish. When they rowed back to the shore, they left their boats while they washed their fishing nets. People were already coming to Jesus; and soon there were so many, there wasn’t room for all of them on the beach. As they crowded closer and closer, what did Jesus do? Luke 5:1-3.

When He finished talking to the people, He told Simon Peter to row their boat out to the deep part of the water, and let down their net again. Peter knew that fishing in the daytime didn’t work, but he obeyed Jesus anyway. What an amazing surprise he got! Luke 5:4-7. 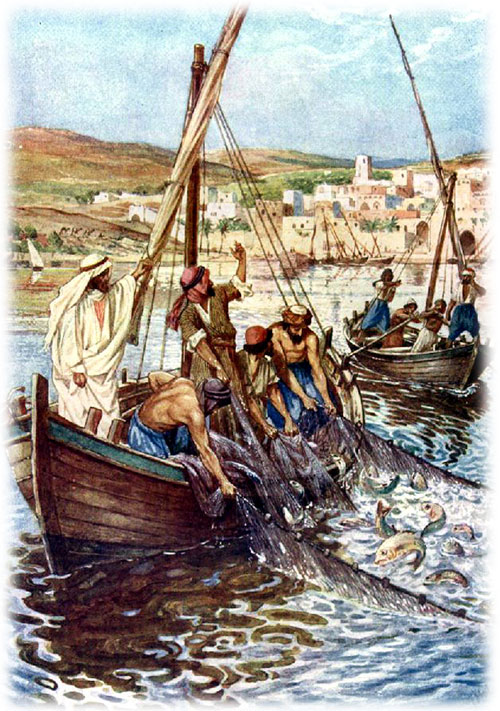 While they were on the lake that night, the disciples probably were discouraged as they thought about many things. They knew that King Herod had put John the Baptist into prison to please his wicked wife. They knew that the Jewish rulers hated Jesus. And they probably wondered what was going to happen to Jesus and to them.

Satan was no doubt tempting them to wonder whether Jesus was truly the Messiah. But after that miracle, Peter realized how wrong his thinking was. How did he show that he was sorry for doubting who Jesus was? Luke 5:8-10.

What did “catching men” mean? Satan had “caught” most of the people in our world in his net of disobedience. Peter and the other disciples would help them become free. After that miracle, did they worry about fishing to earn a living? Luke 5:11.

One evening, at the end of a very busy day by the beautiful Sea of Galilee, Jesus was very tired. What did He tell the disciples to do? Mark 4:1, 35-36.

Jesus was so tired that He went to the back end of the boat, lay down with his head on a pillow, and was soon sound asleep. As night came on, the disciples quietly rowed toward the shore on the other side of the peaceful lake. 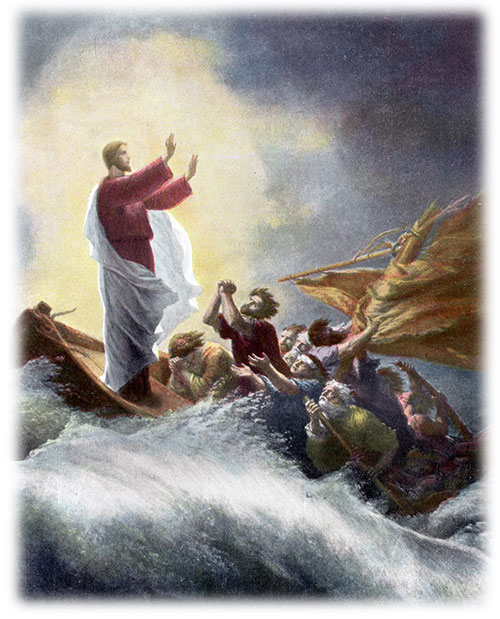 The disciples were used to storms on that lake, but they had never been in one as bad as that one. Even though they were doing their very best, their boat was about to sink. They would all drown. Where was Jesus? They needed Him. Then, as the lightning flashed, they saw Him. He was sound asleep.

“Teacher!” the disciples shouted above the roaring wind, “Don’t you care that we’re drowning?” Mark 4:38.

Jesus opened His eyes. Even though He could see at once what was happening, He was perfectly calm as He stood up and held out His hand. What did He say, and what instantly happened? Mark 4:39.

At once, the wind stopped; the water was quiet; the clouds rolled away; and the stars twinkled in the sky. Then, Jesus turned to the disciples. What did He say to them? Mark 4:40.

The disciples had rowed their boat to what they thought would be a quiet place on the other side of the Sea of Galilee. Near the shore where they landed was a cemetery. What did they see rushing toward them from among the graves? Read Mark 5:1-5.

No wonder everyone was terrified of that man. The disciples were probably as scared as they had been by the terrible storm. But Jesus stood quietly, looking at the man as he rushed up to Him. What did the man do? Mark 5:6.

The poor man wanted help. Satan’s angels were tormenting him, and Jesus immediately told them to leave him alone. As the man tried to talk, another voice came out of his mouth. He said that his name was Legion, but Jesus already knew that He was talking to the evil angels who had filled the man’s mind. What did the evil angels ask permission to do, and what did Jesus say? Mark 5:7-13.

The men who had been taking care of those pigs had seen everything that had happened. You can imagine how excited and frightened they were as their 2,000 pigs rushed wildly down the steep hill, and couldn’t stop before they ran into the lake and drowned.

The frightened pig-keepers rushed to tell the pig-owners about it. Soon a crowd of people were on their way to see for themselves what had happened. In the meantime, perhaps the disciples had helped put clothes on the grateful man whom Jesus had healed. By the time the crowd of people got there, what did they see? Mark 5:14-16.

Those people should have been thrilled about the change that they saw in that poor man, but instead they wanted Jesus to leave. They were thinking about the 2,000 pigs that drowned, and they didn’t want to lose anything else.

The things that they owned were more important to them than that poor man whom Jesus had healed. And oh, how much that healed man wanted to go with Jesus! But Jesus told him that he should stay and be a missionary in his own country. Mark 5:17-20.

Jesus and His disciples rowed back to the other side of the lake, and they met a crowd of people waiting for Him. After talking to them for a while, He and His disciples went to eat at a tax collector’s house. While they were there, a man named Jairus came and knelt as Jesus’ feet. What did he want? Mark 5:21-23.

No wonder the man was in a hurry! Jesus started toward his house; but it was impossible to walk fast, because so many people kept crowding around Him as they went toward his home. Then Jesus suddenly stopped. He looked around. “Who touched Me?” He asked. His disciples wondered why He asked such a question. People were crowding all around Him, and many people were touching Him. Mark 5:24, 31.

But Jesus knew the difference between someone just pushing against Him, and someone touching even His clothes because of a big need. He knew that whoever touched His clothes had faith that He could take care of a big need. Because Jesus wanted to meet that person, He stopped and asked that question.

The lady who had touched Jesus was shy, but oh, she was so very grateful that He had healed her. She had been sick for twelve years. She had spent all her money going to doctors, but none of them had been able to cure her. When she heard about Jesus, she was sure that He could help her even if she couldn’t speak to Him. Read the beautiful story in Mark 5:25-34.

While Jesus was talking to the woman that He had healed, a messenger came and told Jairus that his little girl had died. The poor father’s heart sank. If only it hadn’t taken so long for Jesus to get to her. Now it was too late. But when Jesus heard what the messenger said, how did He comfort the weeping father? What did Jesus tell him? Mark 5:35, 36.

In those days, when someone died the family hired people to weep and wail so everyone would know that someone had died in that home. The mourners, and many others, were already at Jairus’ home when Jesus arrived. What did Jesus do? Mark 5:38-40.

When everything was quiet, Jesus took the parents, and Peter, James, and John, and went into the room where the little girl lay. Jesus went over to her, and He gently took her hand. Then He spoke to her just as if she were asleep and it were time to wake up. Mark 5:37, 41. 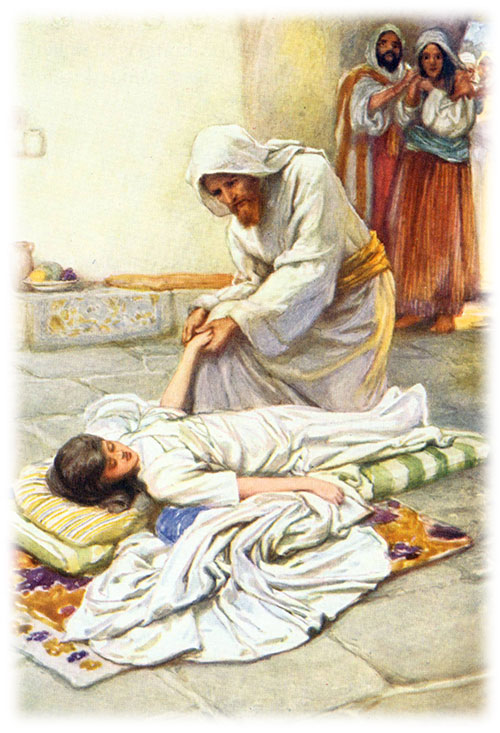 Imagine what happened! The precious little girl opened her eyes and looked into the kind face of Jesus. Perhaps she had never seen Him before. She must have smiled happily as she ran to her parents’ wide-open arms. She was all well. She wasn’t sick or hurting anymore. Mark 5:42.

Then Jesus remembered that the little girl must be hungry. He also knew how angry the priests and rulers were going to be when they heard about what had happened. So He asked the parents not to tell people about the wonderful thing that He had done for them. Mark 5:43.

One day Jesus was leaving the city of Jericho; and, as usual, a crowd of people was walking along with Him. A blind beggar named Bartimaeus was sitting beside the road; and even though Bartimaeus couldn’t see, he could hear the crowd of people passing by. Mark 10:46.

“What’s happening?” he asked. “Why are so many people going past?”

“Jesus of Nazareth is passing by,” someone told him.

“Jesus?” The blind man was excited. “I’ve heard about Jesus. He does all kinds of miracles. I want Jesus to help me. I know He can make me see again.” Then Bartimaeus began shouting to Jesus as loudly as he could. When people tried to make him be quiet, he shouted all the louder. Mark 5:47, 48.

Jesus heard Bartimaeus calling His name. He stopped and looked over at the poor beggar. “Bring him here to Me,” Jesus said. “Don’t worry, Bartimaeus,” people told him. “Jesus wants you to go to Him.”

Bartimaeus jumped to his feet, and he threw off his coat so he could move faster. Probably someone guided him right to Jesus. Then he heard Jesus’ kind voice speaking to him. “What do you want Me to do for you?” Jesus asked; and Bartimaeus told Him that he wanted to be able to see. Mark 5:50, 51.

Jesus was happy that blind Bartimaeus had such strong faith and trust in Him. How did Jesus answer him, and what did Bartimeaus do as soon as he was able to see? Mark 5:52.

Many people followed Jesus and listened to Him. They even watched the wonderful miracles He did to help people. Jesus must have wished that all of them would choose to truly believe in Him and become His faithful followers like Bartimeaus did that day.

Wherever Jesus went, He was a blessing. Think about the many ways that He helped people. We can help others, too. This week, will you try to find many ways to help your family, friends, and whoever you meet?