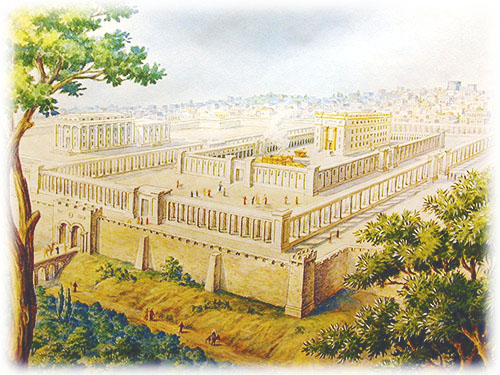 God meant for His beautiful temple to be a holy place where people could learn about Him, worship Him, and praise Him. Everything about the temple was to help people understand God’s promise to send Jesus, the Messiah, to die in our place. Then each person could choose to be free from Satan. How sad that hardly anyone seemed to know that the Messiah had already come!

What Jesus saw when He went into the temple courtyard made Him sad. It looked and sounded like a noisy market place. The people who couldn’t bring their sacrifices with them had to buy them after they got to Jerusalem. So the courtyard was full of noisy animals and birds to sell to those people. 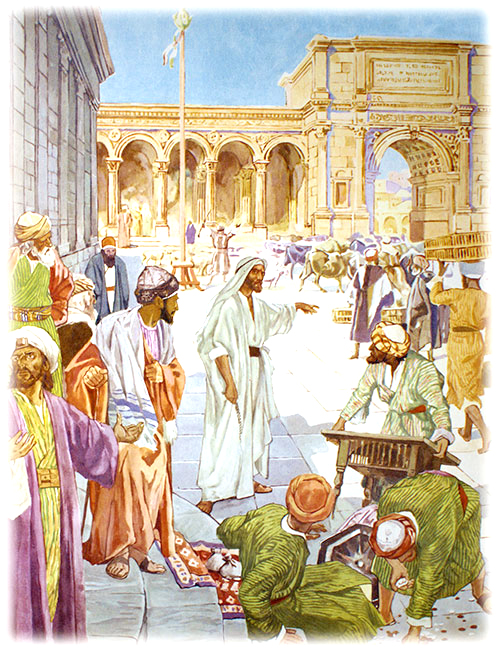 Also, people were trading regular money for the special temple money. It was a rule that every man must give a special offering each year, and only special money called temple shekels could be used. Exodus 30:12-16. So, along with the sounds of animals and birds, angry people were shouting and arguing. Those who were selling animals and birds, as well as the moneychangers, were charging too much. Everyone knew that they were cheating the people.

As Jesus stood on the steps of the courtyard, He saw and heard everything that was happening. The way He stood, and the look on His face, made people stop what they were doing, and stare at Him. He had picked up some pieces of rope and made them into a whip. And as people stared at Him, there was something so powerful about Him that they were suddenly frightened. Quickly everything became quiet. Then Jesus moved toward them. His eyes flashed, and His voice was loud and clear, “Take these things out of here! You have made My Father’s house into a market place!” At once, those greedy, terrified people obeyed. They rushed away from the temple, taking with them their animals and birds. John 2:13-15. 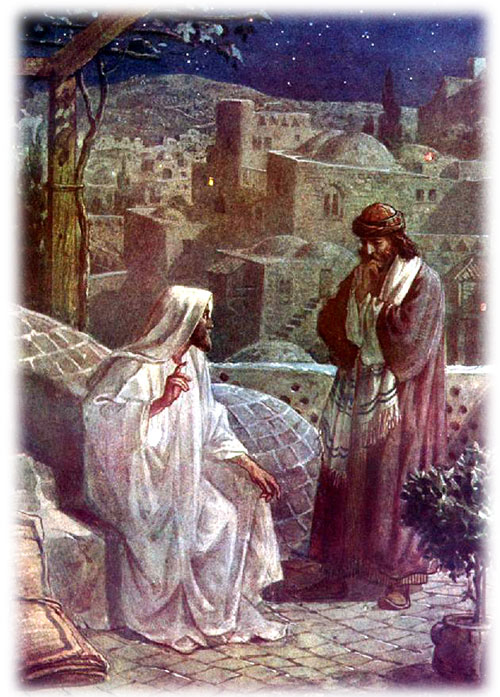 When Jesus told the moneychangers and the people who were selling animals to leave the temple courtyard, many priests and rulers rushed away, too. When they finally got brave enough to stop and think, they were very angry. Even though they must have known that selling animals and changing money in the temple courtyard was wrong, they had agreed to share the money that the people paid to the sellers and moneychangers. Now, Jesus had spoiled their greedy plan.

The people who had come to worship and pray didn’t run away. They were glad about what Jesus did; and as He talked with them, many believed in Him. John 2:23.

One of the important rulers who didn’t run away was Nicodemus. He, too, was glad for what Jesus did. He wanted to talk to Jesus, but he didn’t want people to know about it. So He went to visit Jesus after dark one night. John 3:1, 2.

As Jesus kindly looked at Nicodemus, He told him that he needed to be born again. 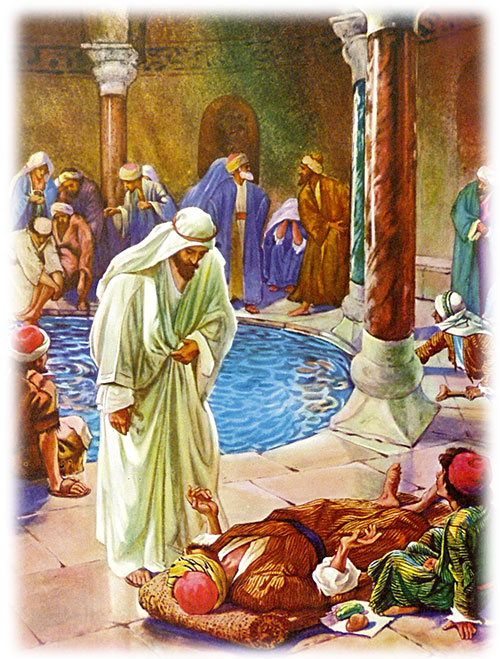 Nicodemus was very surprised. He thought that he was obeying all the Ten Commandments, as well as the many made-up rules taught in the schools. So he was sure that he was good enough to be in God’s kingdom. Besides, how could someone be “born again”? John 3:3.

Jesus gently and politely talked to Nicodemus; and as the Holy Spirit impressed his mind, he began to feel that perhaps he wasn’t good enough. Being born again means having a new heart—new thinking about ourselves and about God. Everyone has sinned, and deserves to die the forever kind of death. Romans 3:23; 6:23.

Jesus told Nicodemus that the Messiah would die on the cross in our place. The priests and rulers didn’t want to believe that. They wanted a Messiah who would drive away their enemies, and make their nation rich and strong. They probably didn’t think that they needed new hearts.

Nicodemus had lots to think about when he went home that night, didn’t he?

Many people where Jesus lived were proud of keeping the Ten Commandments. Their leaders had even made many extra rules that God had never given them. For example, instead of Sabbath being a happy day, there were so many rules about keeping it, it was hard to remember them all. Jesus worshiped with others at the temple or in synagogues (churches) on Sabbath, but He didn’t keep all the extra rules. Jesus knew that Sabbath should be a special, happy day.

In Jerusalem one Sabbath, Jesus went to a place where many sick people were waiting under shelters around a special pool of water. Sometimes the water in the pool bubbled, and the people believed that the first person who got into the water after it bubbled would be healed. John 5:1-4.

Jesus knew that healing all those poor sick people on Sabbath would make the Jewish leaders hate Him more than ever. But He saw one man whose sickness was worse than any of the others. His sickness was his own fault, because he had done things that were bad for his body. But Jesus felt sorry for him. What did they say to each other, and what happened? John 5:5-8.

When Jesus told that man to stand up, he didn’t say, “I can’t.” He chose to trust and believe; and when he tried, God gave him the power to stand up. John 5:9. 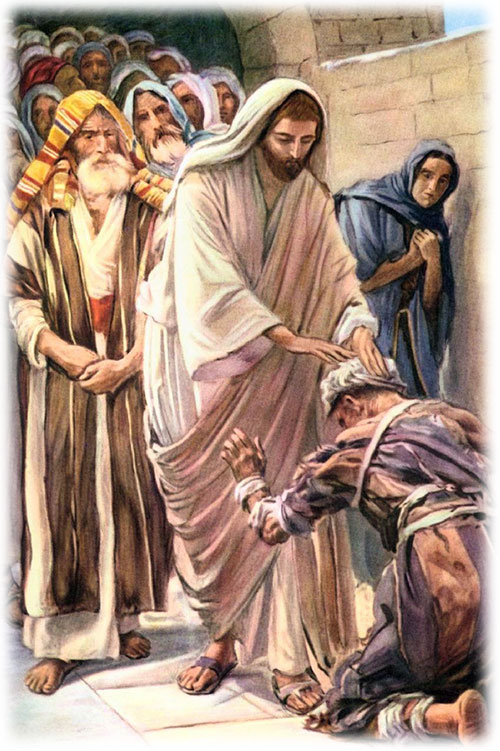 Just imagine how the man felt after not walking all those years! He jumped to his feet, rolled up his mat, and turned to thank the One who had healed him. But Jesus had already disappeared in the crowd. He was gone. And the man didn’t even know His name.

As the healed man hurried to the temple to praise and thank God, who stopped him, and what happened? John 5:10-16.

The angry leaders told Jesus that it was wrong to heal people on the Sabbath. But Jesus said that God, His Father, helps people every day. That made the Jewish leaders hate Him more than ever, because He had called God His Father. John 5:17, 18.

“Unclean! Unclean!” If you heard someone shouting that in the days of Jesus, you would know at once that a leper was warning people not to get close to him. Leprosy was a disease that terrified everyone. There was no cure for it. A leper had to leave his home, stay away from people, and wander around alone, or with other lepers. When he came close to people he had to call out, “Unclean!” and everyone would quickly move away from him.

One day a big crowd was around Jesus as He was teaching and healing people. Suddenly they saw a leper coming toward them. He looked terrible. It was easy to see that the awful disease was slowly killing him. Everyone crowded back to keep from touching him. “Go away!” some shouted. But he kept right on moving toward Jesus.

Jesus quietly waited until the leper came right up to Him and fell at His feet. “Lord, if You are willing, You can make me clean,” the leper begged. What did Jesus do and say? Luke 5:12, 13.

People could hardly believe what had happened. No leper had been healed for hundreds of years. So Jesus warned the man not to tell anyone about what had happened. First, the priests should look at him and say that he didn’t have leprosy anymore. If, before seeing him, the priests heard that Jesus had healed him, they might not have told him the truth. What did the people who saw the miracle do? Luke 5:14, 15. 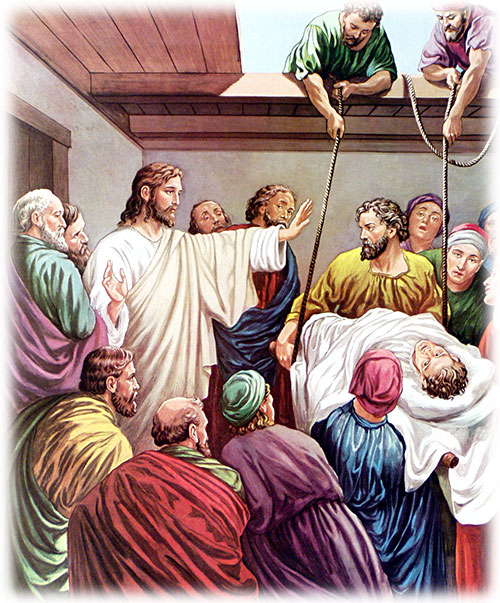 Leprosy is like sin. We can’t cure sin by ourselves. Only Jesus can do that. The people had been taught that sickness, and other bad things that happen to us, all come because God is punishing us. Jesus showed that that is not always true; God loves everyone, even the worst sinner.

One day, Jesus was preaching and teaching in a house. People had crowded inside and around the outside of the house so they could watch, or at least listen. Then four men came, carrying a very sick, paralyzed man on his small bed. They tried to push through the crowd to get to Jesus, but they couldn’t. Mark 2:1-3.

The poor, sick man was desperate. He and his friends knew that getting to Jesus was his only hope. Then he thought of a plan. Mark 2:4.

Imagine people staring up at the ceiling as they heard a noise, and then seeing a man being let down on his small bed right in front of Jesus.

Jesus knew that the reason the man was paralyzed was that he had done bad things that made his body helpless. Jesus also knew that the man longed to know that God loved him and that He would forgive him for doing those terrible things. What were the first words that Jesus spoke to him? Mark 2:5.

As Jesus’ kind face looked down on him, tears of joy must have filled the poor man’s eyes. He was forgiven. But the scribes weren’t filled with joy, and Jesus knew the thoughts that were going through their minds. Mark 2:6-12.

What a happy man hurried back home that evening! What a happy family met him, and eagerly listened to what had happened! And Jesus was happy, too, even though the scribes who were there were not happy. In everything that He did, Jesus was showing what God is truly like. He is a loving Father who pities us and loves us and wants every one of us to be in His kingdom.

Roman officers who were in charge of one hundred soldiers were called centurions. There was a Roman centurion who was so kind to the people, he had even built a synagogue (like a church) for them. One day, when Jesus was in the city where the centurion lived, a group of the synagogue leaders came to ask Jesus to do something special for the kind officer. Luke 7:1-5. 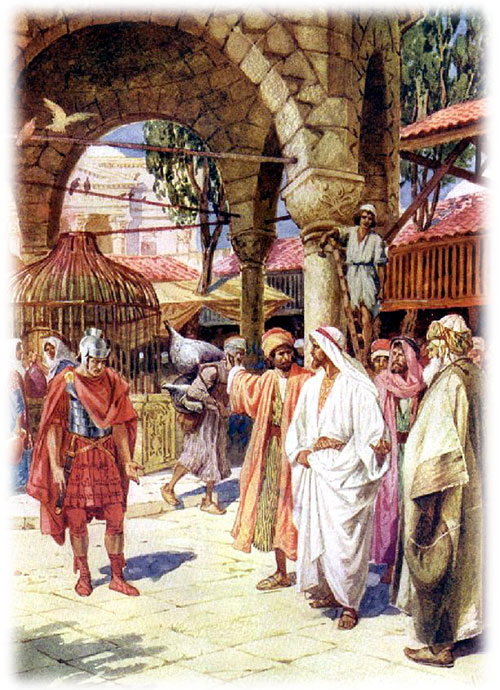 Jesus was always willing to help people. He loved everyone, so He gladly went with the synagogue leaders toward the centurion’s home.

The centurion was embarrassed that Jesus was bothering to come to his house. He didn’t think that he was good enough for such an important person as Jesus to come to his home. He was sure that all Jesus needed to do was just speak, and his servant would be healed at once. Quickly he called some of his friends and asked them to tell Jesus how he felt. Luke 7:6.

But Jesus kept walking toward the centurion’s house. And when the centurion went to meet Him, he told Jesus that he had thought he wasn’t good enough to go to Him. “But say the word,” he begged, “and my servant will be healed.” Luke 7:7.

Jesus was amazed that a Roman centurion believed in His authority and power so much. What did He say about him? Luke 7:9.

Then Jesus turned to the centurion and told him that the healing of his servant depended on his belief that Jesus could heal him. Matthew 8:13, first part.

Jesus knew, of course, that the centurion truly believed that He could heal his servant. And when the centurion and his friends returned to his house, what did they find? Matthew 8:13, second part; Luke 7:10.

Jesus didn’t wait for the sick people to become well before He healed them, did he? Of course not. That wouldn’t make any sense. Does Jesus wait for us to become “good” before He will forgive and help us? Romans 5:8. Why not ask Jesus to help you be like Him right now?