Jesus answered, "It is written: 'Man shall not live on bread alone, but on every word that comes from the mouth of God.'" –Matthew 4:4 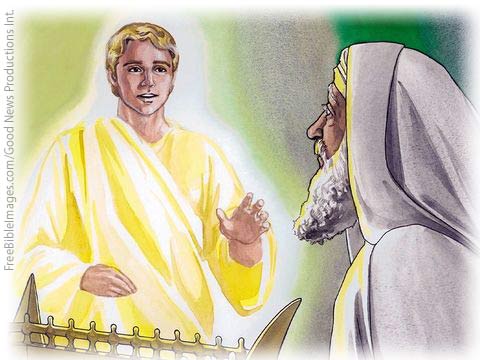 Six months before Jesus was born, another special baby was born in another part of the country. That baby’s name was John. His mother was Elizabeth, and his father was a priest named Zacharias. Elizabeth was one of Mary’s relatives, but she was much older than Mary.

One day, while Zacharias was serving in the temple, an angel suddenly came and spoke to him. “You and Elizabeth are going to have a baby, and his name will be John,” the angel told him. “When he grows up, he will do a special work for God. He will help people get ready for the Messiah to come.” Luke 1:11-17.

Zacharias was thrilled. He and his wife had no children, and they were getting very old. But, just as the angel had said, baby John was born. Perhaps Zacharias was holding their baby in his arms as he spoke the beautiful words in Luke 1:76, 77.

John and Jesus were relatives, but their families lived many miles apart. John grew up in a lonely desert Luke 1:80; Jesus grew up in wicked Nazareth.

John became a great preacher in the wilderness near the Jordan River; and because he baptized many people there, he was called John the Baptist. He told people to stop doing wrong things and choose to do right, because the Messiah was coming soon. Matthew 3:1-6.

When people from Nazareth came back from hearing John preach, Jesus listened to what they said about John’s preaching. He knew that John was telling people about Him. And He knew that the time had come for Him to say good-by to His mother, leave Nazareth, and start preaching, too. By now, it was about 30 years since that night when Jesus was born in a stable as a helpless human baby. Luke 3:23. 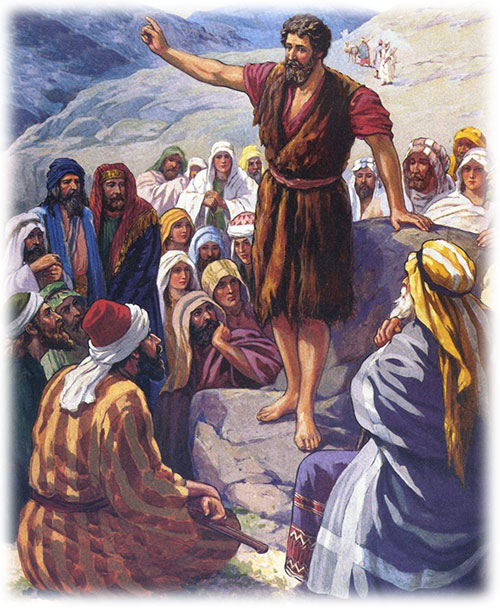 Jesus left His home in Nazareth and went to the Jordan River. There He listened to John’s preaching, and He watched him baptizing people. Being baptized is the same as saying that we are choosing to love, trust, and obey God as long as we live. Jesus is our human pattern, and we want to copy Him, instead of pleasing ourselves. When we are dipped under the water, we show that we want our old “self” to die and be buried. Coming back up out of the water shows that we want to be raised to a new life, the same kind that Jesus has. By His help, we want to be kind, loving, and obedient, like He was.

The moment John saw Jesus, he knew who He was. But why would Jesus want to be baptized, he wondered? He knew that Jesus had never sinned. In fact, John thought that Jesus should baptize him. Matthew 3:13-15. 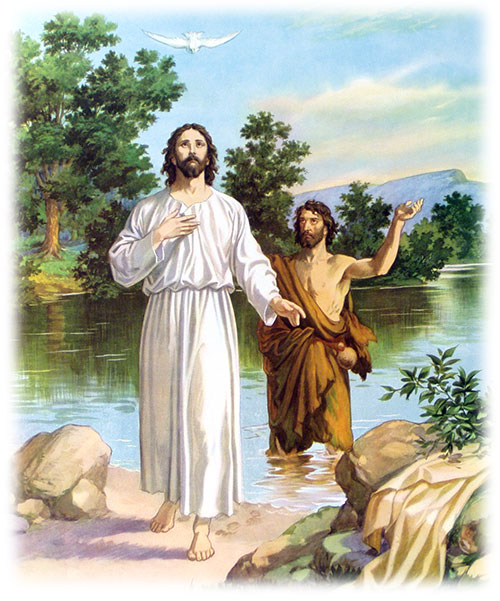 Even though Jesus had never sinned, He wanted to set a good example for others to copy. He knew that every human must choose whether to obey God or Satan. By being baptized, Jesus showed that He had chosen to always obey His Father in heaven. He showed that He would always trust in His power to help Him, just as we must trust His power to help us.

When Jesus came up out of the water, He stopped and prayed on the river bank. As He prayed, the Holy Spirit came down upon Him in a form that looked like a dove. Also, the voice of God was heard speaking to Him from heaven. John saw the shining Dove, and he was thrilled. God had promised to show him that very sign. Jesus was thrilled, too. How wonderful it was to hear His own Father speak right out loud to Him. He heard Him say that Jesus was His Son, and that He was pleased with Him. Luke 3:21, 22; John 1:32-34.

Satan had carefully watched Jesus from the time He was born. Every other human had obeyed him at least once. But even though Satan had tried every way he could, Jesus had not obeyed him even once. 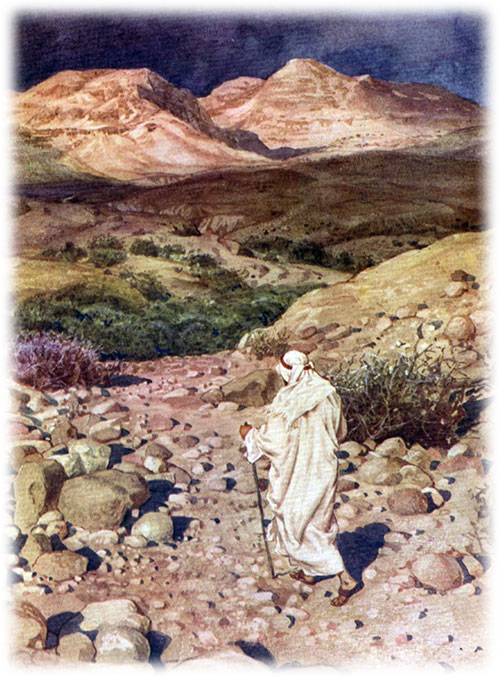 Satan knew that if Jesus never sinned, He wouldn’t deserve to die Himself, so He could be the perfect, true “Lamb of God” that all the sacrificed lambs had reminded people of. He would die in the place of sinners. And all who chose to trust Him could have His power to obey Him. Then they would belong to the kingdom of God instead of belonging to Satan. And because Jesus would rise from the dead, He could raise them from the dead, too. In the end, they would live forever with Him. No wonder Satan wanted Jesus to sin! And after His baptism, He went to a place where Satan tried very hard to get Him to sin. Luke 4:1.

As Jesus was alone in the wilderness, He thought and prayed about what He had come to our world to do. He thanked His Father for speaking out loud and saying those beautiful words when He was baptized. Day after day He kept on praying and going without food. There was no food in the wilderness; there were only dangerous wild animals.

As Jesus thought about taking all the sins of everyone, just as if He had done them all Himself, and then dying in everyone’s place, Satan tried his best to discourage Him. Satan tempted Him to give up trying to save us, but Jesus kept praying and trusting His heavenly Father.

Day after day, then week after week, went by. Finally, it was almost six weeks since Jesus had eaten anything, and He was becoming weaker and thinner every day. But He was still praying and trusting His Father in heaven.

Then Satan suddenly appeared to Jesus. You can be sure that he didn’t look like most of the pictures we see of him. He is still a powerful angel, even though He chose to become God’s terrible enemy. When he talked to Jesus that day in the wilderness, he pretended to be a loyal angel from heaven. What did he tell Jesus that He should do? Matthew 4:3.

How did Jesus know at once that the angel speaking to Him was not from heaven? What were the first words Satan said? They were, “If You are the Son of God.” But Jesus knew that He was the Son of God. His Father had said so when He spoke from heaven at Jesus’ baptism. There was no “If” about it. How did Jesus answer Satan? Matthew 3:17; 4:4. 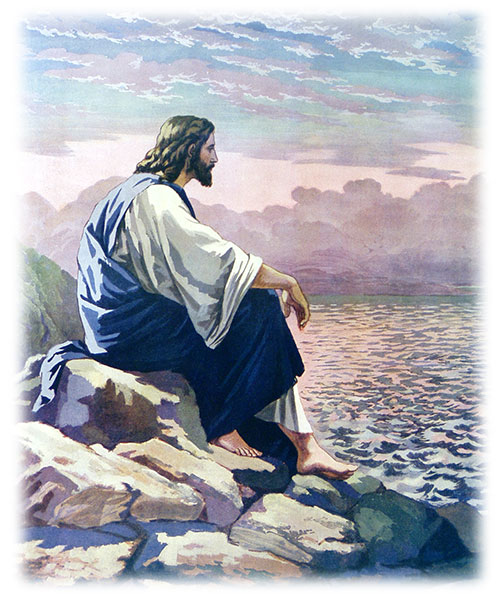 Adam and Eve were in the beautiful Garden of Eden, and they weren’t even hungry when Satan tempted them. But they disobeyed by eating what God had told them not to eat. Jesus was in a bare, dry wilderness when He was tempted; but He had chosen to trust and obey God ,even if He died from hunger. He was not going to obey Satan.

Jesus still refused to prove to Satan that He was the Son of God. He knew that it is wrong to do foolish things to prove that God will take care of us. How did Jesus answer Satan? Matthew 4:7.

Satan was getting desperate. But he knew that Jesus was getting weaker and weaker, so he tried once more. What did he do this time, and what did Jesus tell him? Matthew 4:8-10.

Satan had to obey when Jesus told him to leave. Jesus had already proven that no matter what kind of temptation Satan would try to bring, He was not going to obey him. Can you imagine how thrilled the good angels must have been when they could finally help Jesus? Matthew 4:11.

Satan knew that even though Jesus was now human, He was also God the Son. He knew that Jesus had the same power that He always had, but He used it only to help others. He never used it to help Himself. But after Jesus had gone for nearly six weeks without any food, Satan had been sure that he would be able to get Him to use His power as the Son of God to help Himself. When He refused to do that, Satan was more desperate than ever. He knew that in the end, he and his wicked angels would all be destroyed unless he could somehow get Jesus to obey him at least once. He would have to do everything he could think of to keep tempting Him. And he would do everything possible to keep people from believing in Him. 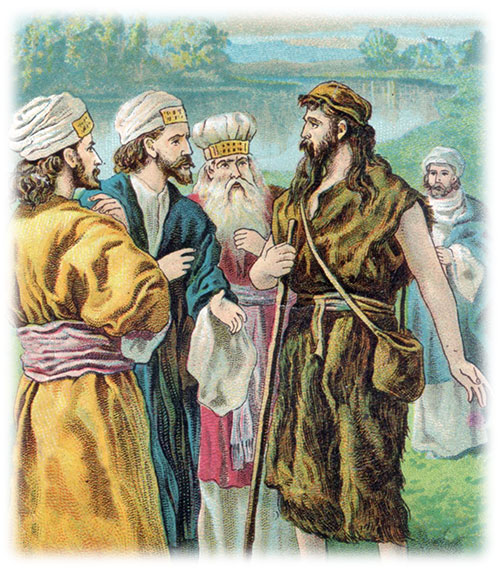 After leaving the wilderness, Jesus went back to where John the Baptist was still preaching and baptizing people. One day, when some priests and Levites visited John, what happened? John 1:19-23.

The day after the priests talked to John, he saw Jesus in the crowd. And when John called Him the Lamb of God and the Son of God, people turned and stared at Jesus. He wasn’t at all like they had expected the Messiah to be. Yet there was also something kingly about Him. They wondered what John meant when he called Him the Lamb of God. And why did he also call Him the Son of God? John 1:29, 34.

The next day, two of John’s disciples decided to find out more about Jesus. And before the following day ended, five men had decided that Jesus must be the Messiah whom John had promised would come soon. John 1:35-49.

People who accepted Jesus as the Messiah, were called His disciples. And before long, there were twelve men who became His special disciples. They were with Him most of the time.

Jesus and His special disciples were invited to a wedding in a town near His home in Nazareth. Mary, Jesus’ mother, was there, too. How happy Jesus and His mother were to see each other! 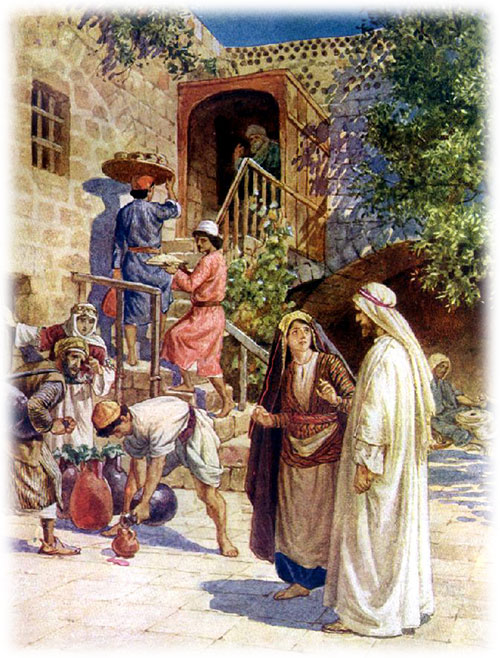 Many of the people at the wedding had already heard about what happened at the Jordan River when Jesus was baptized. Now they probably were watching Him as they quietly talked about Him. But before the wedding feast was over, something very embarrassing happened, and Mary quietly told Jesus about it. John 2:1-4.

The way Jesus answered His mother may sound strange to us; but in those days, it was polite. Jesus also meant that it wasn’t time for Him to tell the people that He was the Messiah. Even though they could see something very special about Him, He knew that they didn’t expect the Messiah to look like an ordinary man. Besides, many of the guests had probably known Jesus from the time He was a little boy. They thought of Him as the son of Joseph and Mary.

Mary wasn’t disappointed by Jesus’ reply when she told Him about running out of grape juice. He had always been her dear, obedient helper, and she trusted Him. After she told the servants what to do, what happened? John 2:5-10.

Think about it. First of all, the servants must have wondered why Jesus told them to fill those huge jars with water. Then, how shocked they must have been when they dipped into the jars, and poured out grape juice!

Imagine the look on the face of the man in charge of the feast, when he tasted the delicious juice! Soon the guests were talking about it, too. When they asked about it, the servants probably told them what Jesus had done to make the good grape juice. That was the first of many miracles that Jesus did. And it helped the disciples to believe more than ever that Jesus was truly the promised Messiah. Verse 11.

Each day, Satan often tempts us to think or do wrong things. But Jesus will help us remember what we have studied in the Bible so we can answer Satan like Jesus did. Do you want to keep studying your Bible and learn how to trust Jesus and make right choices?