Jesus Comes to Our World

"Do not let your adornment be merely outward--arranging the hair, wearing gold, or putting on fine apparel-- rather let it be the hidden person of the heart, with the incorruptible beauty of a gentle and quiet spirit, which is very precious in the sight of God." –1 Peter 3:3-4 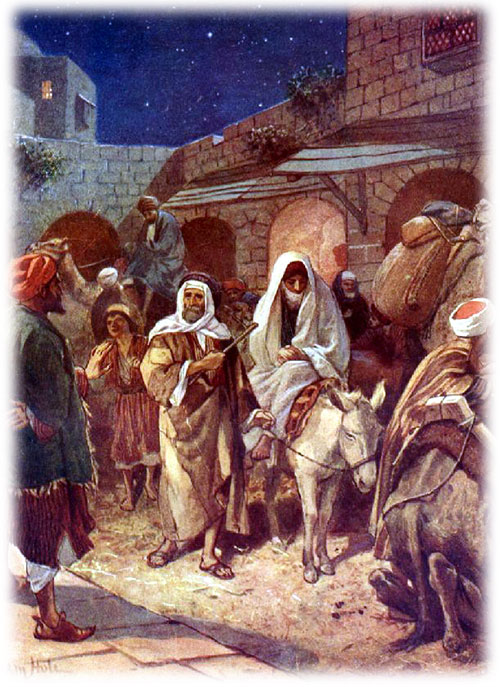 If you had been in the little town of Bethlehem one night about 2,000 years ago, you would have seen a man leading a donkey down the narrow street. His wife was riding on the donkey, and they had traveled many miles from their home in Nazareth. The man’s name was Joseph, and his wife’s name was Mary. Mary was going to have a baby, and they were very tired. They knew that very soon her Baby would be born, so they must find a place to stay.

Many people were in Bethlehem that night, and the inn was already full. Joseph and Mary couldn’t find a place to stay anywhere. Finally, someone let them stay in the place where they kept their animals at night. They probably had only straw to sleep on, and the stable probably didn’t smell nice; but Joseph and Mary were thankful. When Mary’s Baby was born, they named Him Jesus.

Joseph probably made a little bed on some straw in a manger. Then Mary carefully wrapped the precious Baby and laid Him in the manger. He was God the Son, our great Creator. He had become a human, and He was starting like every other human—as a tiny, helpless baby. Luke 2:7.

The Bible tells the beautiful story of the angel talking to Mary about her Baby. He told her who He would be, and who His real Father would be. Luke 1:26-35.

Prophets had told many things about Jesus, the Messiah, for whom His people had been waiting. They knew that He should be coming soon. Micah’s prophecy said that He would be born in Bethlehem. And Daniel’s prophecy even told the time of His baptism. Micah 5:2; Daniel 9:25.

But even though the prophets had told many things about the Messiah, most of the people had wrong ideas of what He would be like. They thought that He would be as a strong king who would help them become a great nation and drive away their enemies. They didn’t know that their real enemy was wicked Satan. Unless God sent Someone to free them from his power, they would always be his prisoners. Now Jesus had come to free them from Satan’s power.

The night that Jesus was born, shepherds were watching their sheep on the hills outside the little village of Bethlehem. They probably were sitting around their fire, quietly talking. Suddenly, a bright light shone all around them. A shining angel told the frightened shepherds that Christ (the Messiah) had come. Then, they saw and heard many angels. Luke 2:8-14.

When the angels stopped singing, they disappeared.

“Hurry, let’s find the Baby!” the shepherds said, and they hurried to Bethlehem to look for Him. Luke 2:15.

The angel had said that the Baby would be lying in a manger. The shepherds must have wondered why he would be in a manger. But that’s just where they found Him. And because they believed the angel, they probably knelt reverently around the manger and gave Him their hearts. Luke 2:16.

As they left, the shepherds told everyone they met about the angels and the Baby. And the people they told wondered and wondered about it all. Luke 2:17, 18. 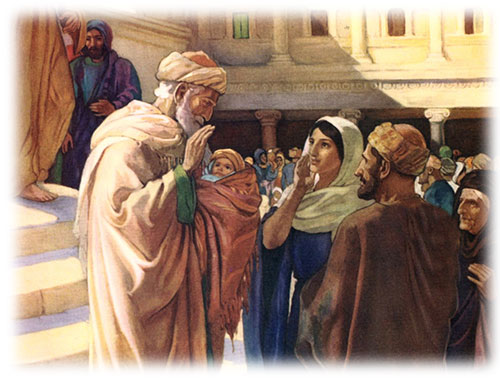 After about six weeks, Joseph and Mary took Baby Jesus to the beautiful temple in Jerusalem. The priest who blessed Him didn’t know that he was holding the promised Messiah.

But the Holy Spirit spoke to two old people who were longing to see the Messiah before they died. Simeon, an old man, came to the temple first, and at once he knew who Jesus was. Then came Anna, an old woman. How happy Simeon and Anna were! And how surprised Joseph and Mary must have been! Luke 2:25-30, 36-38.

Some very rich, wise men who lived in a country hundreds of miles from the land of Israel, were expecting the Messiah, too. They sometimes watched the stars at night.

One night, they saw a bright, new star far away toward the land of Israel. Long before their time, Balaam, another wise man, had said that a Star would come out of Israel. The wise men wondered whether this new star was a sign that a King of the Jews had been born. Numbers 24:17. 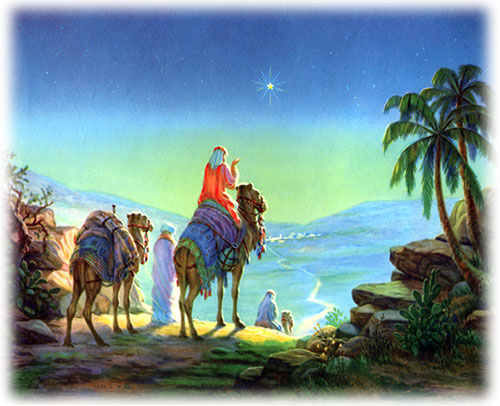 Riding on their camels and carrying rich gifts, the wise men went to welcome and worship the new King. They could travel only at night when they could see the star, so the trip took a long time. But at last they arrived at Jerusalem, and the star stopped right over the beautiful temple. Then it disappeared.

Eagerly the wise men went on to the temple. Surely the priests there would be happy about the birth of their new king. But when they asked where the new King was, the priests looked surprised and puzzled. Matthew 2:1, 2.

King Herod heard about the wise men, and he quickly sent for the priests to find out where the prophets said the Messiah would be born. When they said that He would be born in Bethlehem, what did Herod do? Matthew 2:3-8.

It was almost dark when the wise men left Jerusalem, and how happy they were to see the star again! Sure enough, it led them to Bethlehem, and it stopped right over the place where Joseph and Mary and Baby Jesus were. Matthew 2:9, 10. 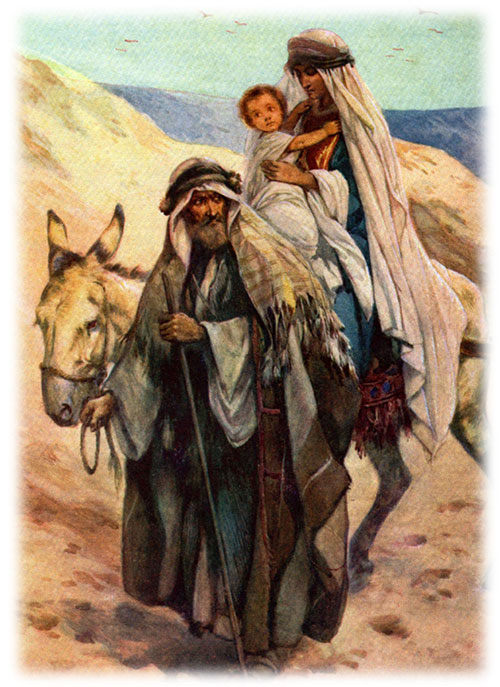 Baby Jesus wasn’t the kind of King the wise men had expected, but they knew that God had led them to Him. As they reverently knelt around Him, they gladly gave Jesus their hearts, as well as their expensive gifts. When they left, why didn’t they go back to Herod and tell him where to find Jesus? Matthew 2:11, 12.

After the wise men started back to their country, God gave Joseph a dream. What did God tell him to do? Matthew 2:13.

Joseph didn’t wait to obey. He and Mary quickly packed their few things, including the presents the wise men had given Jesus. Mary picked up her precious Baby, and they hurried away from Bethlehem at night. Mary and the Baby probably rode on their faithful donkey. Matthew 2:14.

When King Herod found out that the wise men had gone back to their country without telling him about finding Jesus, he was sure that there was a plan to make Jesus king. What terrible thing did he do? Matthew 2:16.

Jesus was safe with Joseph and Mary in the land of Egypt, where they probably lived for several months. And with the gifts of the wise men, they had enough money to buy everything they needed. Then God gave Joseph another dream, telling him that they could safely return to the land of Israel. Joseph thought that God would want Jesus to grow up in Bethlehem, but where did God tell him to go? Matthew 2:19-23.

Nazareth. That was the place where Joseph and Mary had lived before going to Bethlehem. Everyone knew that Nazareth was a wicked place. Why would God want His Son to grow up in Nazareth? Also, why did He let Him be born in a barn, and have only a manger for a bed? Does that seem strange? But think about it. Do you know about people who are very poor? Do you know about children who live in bad, dangerous places? Does Jesus know how they feel? Of course, because He lived like that, too. 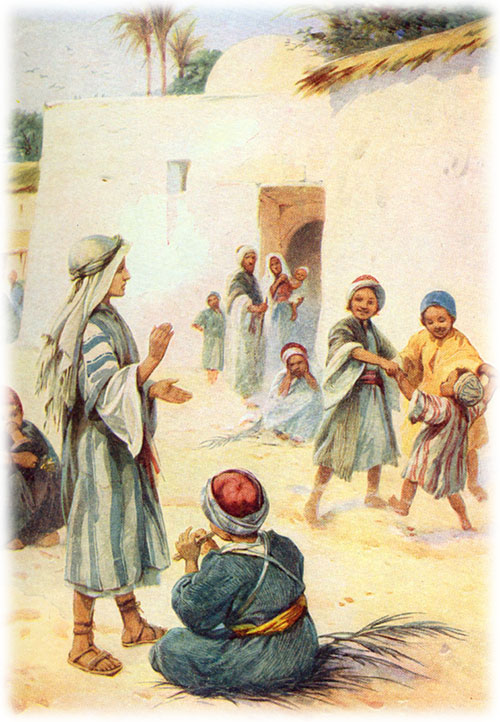 Growing up in Nazareth wasn’t easy. Joseph’s first wife had died, and he already had a family before he married Mary. Sometimes people said unkind things about Jesus, because they knew that Joseph wasn’t His real father.

There were many temptations in Nazareth. And oh, how Satan tempted Jesus to give in to them! But not even once did Jesus choose to obey Satan. When His playmates tried to get Him to cheat or play mean tricks or tell something that wasn’t true, Jesus always said “No.” 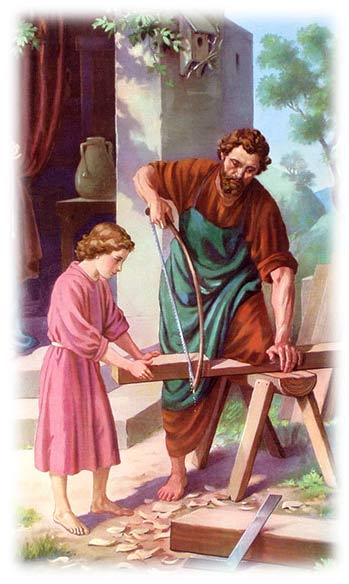 Joseph had a carpenter’s shop, and his older sons helped him there. As Jesus grew, He learned how to be a good carpenter, too. He was a hard worker. He was obedient and kind and thoughtful, and He never felt or acted as if He were better than others. People couldn’t help liking Jesus. Luke 2:52.

Jesus didn’t go to the regular schools like other children did. His mother knew that in those schools the children were taught many rules that were not in the Scriptures. So she taught Him at home. He learned the Bible stories and what the prophets wrote about the Messiah. He also learned from nature. He liked plants and animals, sunsets and sunrises, the moon and stars at night, and the clouds. People couldn’t understand why Jesus didn’t obey the rules that were taught in the schools. Sometimes His brothers tried to get Mary to agree with them when Jesus chose to be different. But He always quietly obeyed the rules of His Father in heaven.

After turning twelve years of age, Jewish boys could go with their parents to the yearly Passover Feast in Jerusalem. And Jesus did that, too. Luke 2:41-42.

The Passover was to remind God’s people of a night in Egypt many years before. That was when He delivered them from being slaves and punished the Egyptians. That night, the oldest son of the families that had put the blood of a lamb on their doorposts didn’t die. That blood showed that they were trusting in the blood of Jesus to save them. When the death angel saw the blood, he passed over those homes. That is why the holiday was called Passover. Exodus 12:3, 7, 12, 13.

The animal sacrifices at the tabernacle, and later at the temple in Jerusalem, were to remind people that Jesus, the real Lamb of God would come; and, like the innocent lambs, He would die in our place so we can choose to live with Him forever.

As Jesus watched everything at the Passover in Jerusalem, He felt sure that somehow they were about Him. More and more, He felt that the lamb was to remind people of Him. He remembered the prophecies that the Messiah would be like the lamb that was sacrificed. Isaiah 53:7.

At the end of the Passover, Joseph and Mary started back home with their friends and relatives. They thought Jesus was with them, but He wasn’t. Luke 2:43, 44.

When it was time to camp for the night, Joseph and Mary couldn’t find Jesus. Terribly frightened, they hurried all the way back to Jerusalem. How long did it take them to find Jesus, and what was He doing when they found Him? Luke 2:45, 46.

ow relieved Joseph and Mary must have been! Jesus was politely asking the teachers about the prophecies and about the Messiah. The teachers could tell that Jesus knew the Scriptures well. When Mary gently scolded Jesus for not staying with them, what did He say? Luke 2:47-49.

Jesus’ answer showed that He knew Joseph wasn’t His real father. Because Jesus was human, it had been easy to sometimes forget that He was also God the Son. He had come to do a very special work on our earth; and He knew that God, His true Father, would tell Him just when it was time to start. Until then, He kept on being a loving and obedient son of his mother, Mary, and his earthly father, Joseph. Luke 2:51.

When Jesus was born, there wasn’t room for Him in even one home. Today, Jesus is “knocking” at the door of our hearts. He wants to come in and be our friend and Savior. Revelation 3:20. Do you want to say to Jesus, “Come, live in my heart”?