Daniel and His Friends

"The angel of the LORD encamps all around those who fear Him, And delivers them." –Psalm 34:7 NKJV 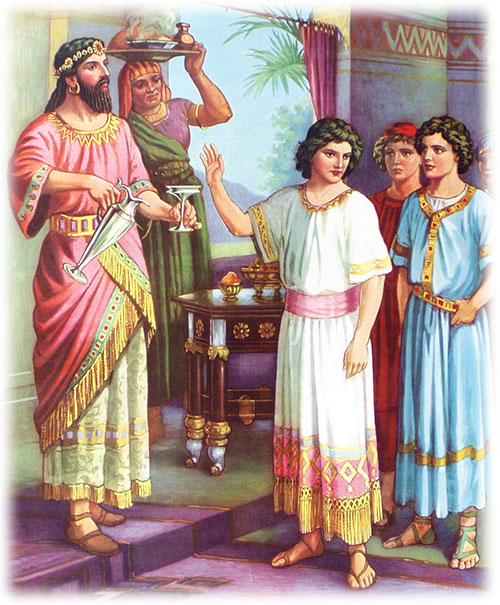 The very thing that God had warned about so many times was happening. Some people from Judah were being taken captive to Babylon.

Had all the captives chosen to obey Satan? No. Even though Daniel and his three friends were still teenagers, they were among those who were loyal to God.

Finally, after walking many miles, they arrived in Babylon. And soon, Daniel and his three friends, together with other young men, were chosen to study in the king’s school. What did the king give them to eat? Daniel 1:5.

Meat? Wine? Daniel and his three friends had never eaten those things. They weren’t good for them. What were they to do?

Daniel asked the steward in charge of their meals, to let them try a special plan for just ten days. What kind of food did they ask for? Daniel 1:12.

The steward didn’t know that what Daniel and his friends wanted to eat was the best food. He was sure that the boys would become sick if they didn’t eat the king’s food, and that the king would kill him if he found out. But the steward let them try the plan for ten days.

Daniel and his friends asked God to bless their choice to be true and faithful to Him. Each day they drank plenty of water and ate good food. After the ten days, what did the steward decide? Daniel 1:15, 16.

God had blessed them for refusing the king’s food and choosing to obey God instead. 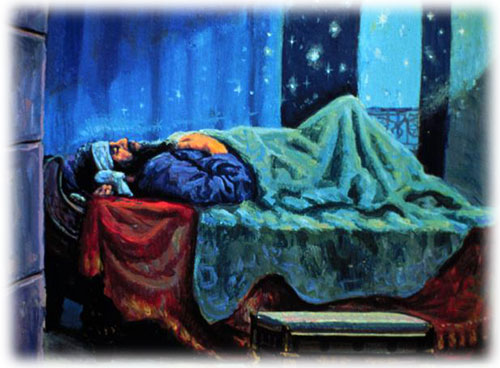 During their three years of study, their minds were clear and sharp. When the king tested them at the end of the three years, what did he find out? Daniel 1:18-20.

He could hardly believe how wise they were. Now they would be among the wise men in Babylon.

One day a guard came to take Daniel and his three friends away to kill them. What had happened? Daniel 2:13.

The night before, King Nebuchadnezzar had a terrifying dream. But when he woke up, he couldn’t remember it. Daniel 2:1.

“Tell me what I dreamed,” he ordered his wise men. Now the wise men knew that they were in trouble. They couldn’t tell the king what he had dreamed. Daniel 2:2-11. 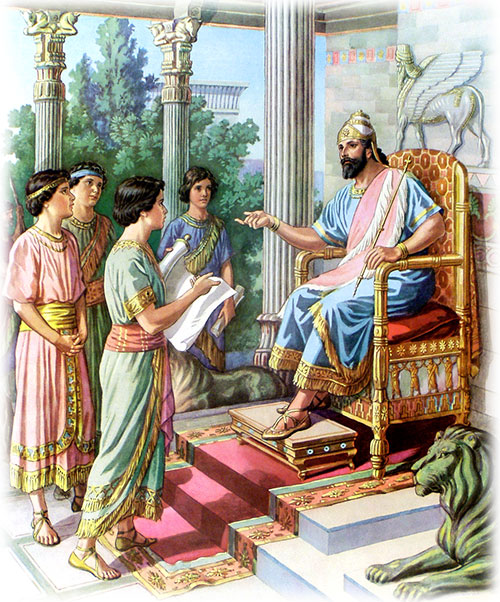 The king was so angry, he ordered his captain to kill all the wise men in Babylon. That’s why Arioch had come to get Daniel and his three friends. They hadn’t gone to the king with the other wise men. So now Daniel talked to the king and asked him to wait, and he would tell him his dream and its meaning. Daniel 2:12-16.

Then Daniel hurried back home to pray with his friends. What happened that night? Daniel 2:14-19.

In the morning, when Daniel went to see the king, he first told him that no wise man could tell him what he had dreamed. Only the God of heaven could do that. Then he told the king his dream. Daniel 2:31-35.

Then the king remembered every bit of it. And now he eagerly listened as Daniel told what it meant. Daniel 2:36-45.

Each part of that amazing image, starting at the head, told about the kingdoms that would be in our world from Babylon until Jesus comes. And Babylon was represented by the head of gold.

Daniel explained that the stone which smashed the image was God’s kingdom that will start when Jesus comes back. It won’t be like the other kingdoms, because it will be perfect; and it will last forever.

After Daniel finished telling the dream and its meaning, what did the king do? Daniel 2:46-49. He made Daniel his most important counselor, and his three friends became important helpers, too.

King Nebuchadnezzar was pleased to know what his dream meant, but he wanted his kingdom, represented by the head of gold, to last forever. So now what did he do? Daniel 3:1. The image looked like the one in his dream, except that it was all gold, not just the head.

To dedicate his golden image, the king planned a big ceremony. All the important people in his kingdom had to come.

At the ceremony, the people were told to bow down and worship the golden image as soon as the music started. What would happen to anyone who didn’t worship the image? Daniel 3:6. 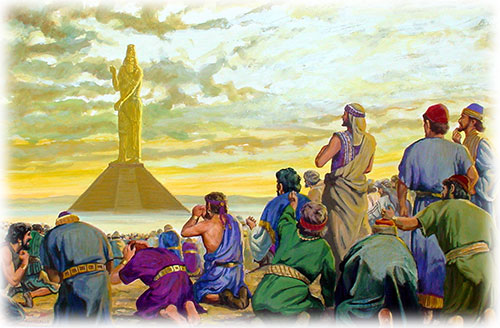 When the music started, did everyone worship the image? Daniel 3:12. When some of the wise men saw those three brave young men standing instead of bowing down, they hurried to tell the king.

When the three friends were brought before the king, were they afraid? No. They knew that God was powerful enough to save them. They had chosen to worship only Him, no matter what happened. Daniel 3:14-18.

The king was very angry. He ordered that the furnace be heated seven times hotter. Strong men threw the three young men into that hot, fiery furnace.

As the king watched, he suddenly saw four men walking around in that terribly hot fire. Who was that fourth person? Daniel 3:25. 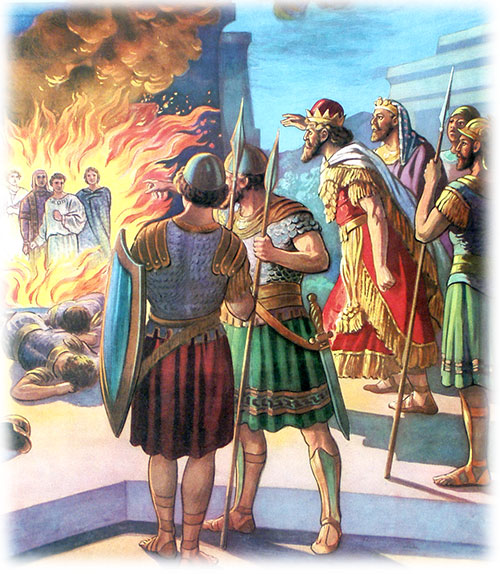 The king went closer to the hot furnace and shouted, telling them to come out of the fire. When they obeyed, the important men crowded around to look at their clothes and hair. There wasn’t anything to show that they had been in that raging, hot furnace. They didn’t even smell like smoke. Only the ropes that the strong men had tied around them had burned up.

For a long time, King Nebuchadnezzar remembered what had happened at the fiery furnace. But eventually he began to forget, and he became very proud again.

One night, God gave him another dream; and this time, when he woke up, he remembered it. He felt sure that it had an important meaning. Surely his wise men could tell him what it meant. Daniel 4:4-7.

When Daniel came, the king told him that in his dream, he had seen a huge tree that grew very tall. In the tree were many birds, and animals lived under its shade. 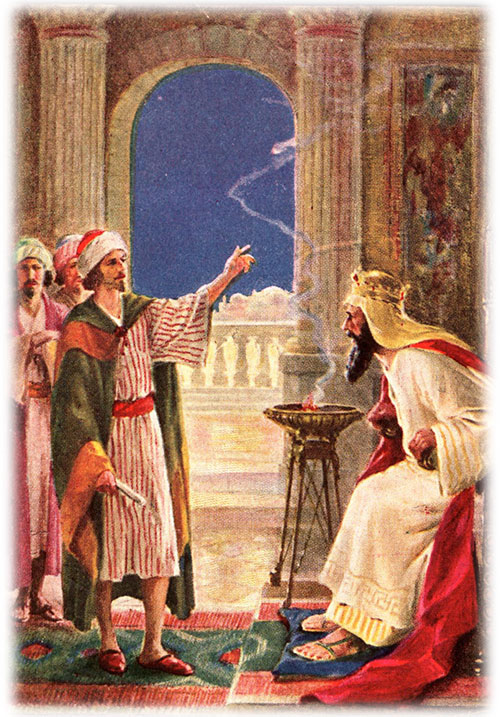 Suddenly, a voice from heaven said to cut the tree down. But at the end of seven years, the voice said, it would become like it had been before. Daniel 4:10-16.

As Daniel listened to the king tell his dream, God told him its meaning. Then Daniel told the king that the tree represented him. Because he was forgetting where all his blessings came from, God would take them away for seven years. Nebuchadnezzar would lose his mind and become like an animal. How dreadful!

Daniel begged the king to change the wrong things he was doing. If he would, perhaps God would keep the punishment from happening. Daniel 4:27.

For a while, the king did change. But soon, he became proud again. One day about a year after having the dream, he was walking around in his beautiful palace, proudly bragging about the great city of Babylon which he had built. Daniel 4:28-30.

Suddenly a voice spoke from heaven, and the warning of his dream came true. The king had to go live in the fields, and eat grass like an animal. Everyone must have been shocked. Daniel 4:31-33.

At the end of seven years, God healed the king’s mind, and he was well again. Everything had happened just as God had said. Daniel 4:34-36.

Was Nebuchadnezzar different after those seven years? Did he still brag, or had he learned the very important lesson that God wanted to teach him? Daniel 4:37.

One of the kings that came after Nebuchadnezzar died was his grandson Belshazzar. And even though Belshazzar knew what had happened to his grandfather, he still chose to have a proud heart and worship idols.

The armies of the Medes and Persians had started conquering Belshazzar’s kingdom, and they were near the city of Babylon. But Belshazzar wasn’t worried; he was sure they couldn’t get inside the city. 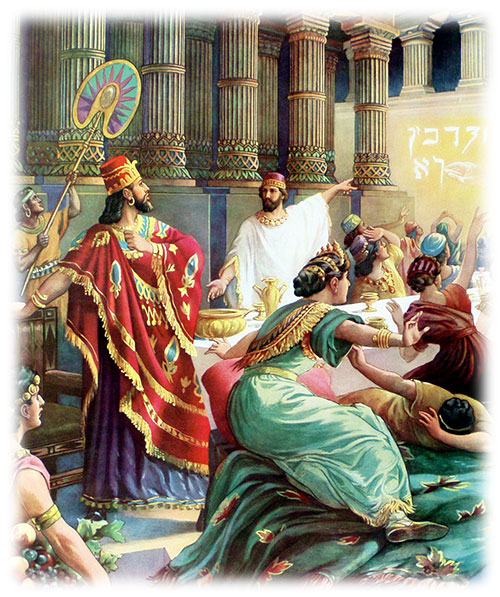 One night, the king had a big party, and before long it became very wild. Belshazzar became so drunk, he probably didn’t care what he did. He insulted the God of heaven and praised their heathen gods. Daniel 5:1, 4.

Then, suddenly, everything became silent. The people shook with fright as they stared at the wall. They watched a hand slowly write words on the wall. No one could read the words, and everyone was terrified.

“Quick! Call the wise men!” the king shouted. The wise men hurried in. But they couldn’t read the words either.

Finally the king called for Daniel. He reminded the king that the God of heaven, not the heathen idols, had made the kingdom of Babylon so great. Then he read the words, and told what they meant.

Mene: The years of Babylon were ending. Tekel: God had “weighed” the king’s character and it was not at all like the character of Jesus. It was selfish, like Satan’s. Upharsin: The kingdom would be given to the Medes and the Persians.

That very night, while everyone was celebrating, the Medes and Persians had found a way to get into the city, and King Belshazzar was killed. Daniel 5:30. 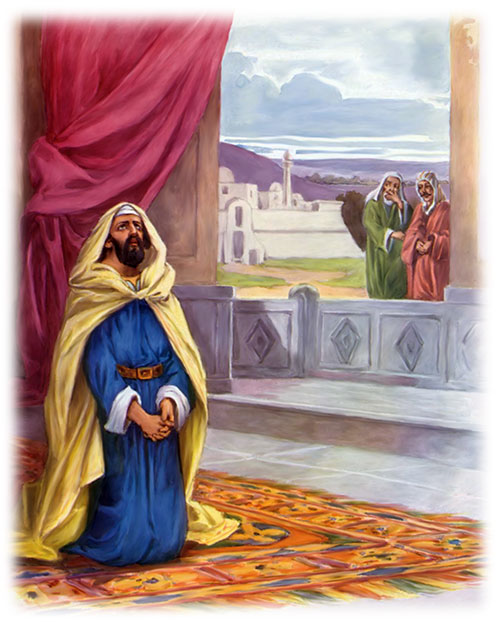 The kingdom of Babylon had ended, and the kingdom of the Medes and Persians took its place. Everything was happening just like God had shown King Nebuchadnezzar long ago in the dream of the great image.

By now, Daniel was an old man; but he was the wisest man in the new kingdom. And the new king, Darius, chose Daniel to be his best helper. Daniel 5:31-6:3.

The other leaders worshiped idols, and they hated Daniel because he loved and obeyed God. What did they do? Daniel 5:4.

Those jealous leaders watched every little thing Daniel did. But not once did he do anything wrong. Was there no way to get rid of Daniel?

Finally they thought of a plan. They knew that the king liked Daniel very much. They also knew that Daniel would never stop worshiping his God no matter what happened.

So they went to King Darius and asked him to make a law that for 30 days everyone would worship only the king. Anyone who didn’t obey would be thrown into a den of hungry lions. The king was so pleased, he forgot that Daniel worshiped only God. So he signed the law. Daniel 5:7-9.

Daniel knew that the law had been signed, but he kept on praying with his windows open. Those wicked men watched him; and sure enough, they saw that he still prayed to God three times a day as usual. Daniel 5:10, 11.

The next morning, those cruel men told the king about Daniel praying to God. Immediately King Darius knew that he had been tricked. And he was very angry. He tried to find a way to save Daniel, but there was no way to change the law. Daniel must be put into the den of hungry lions. What did the king say? Daniel 5:16, 17.

The king couldn’t sleep that night. He kept thinking about Daniel in the den of lions. Daniel 5:18.

Very early in the morning, the king hurried to the lions’ den, and called to Daniel. “Daniel, servant of the living God, has your God, whom you serve continually, been able to deliver you from the lions?” Daniel 5:19, 20.

Can you imagine how excited the king must have been as he heard Daniel’s cheerful voice answer? Daniel 5:21, 22.

Daniel was taken out of the den, and there wasn’t even a scratch on him. He had been perfectly safe all night. The lions hadn’t hurt him. Now King Darius knew for sure that Daniel’s powerful God was the only true God.