The Voice of Stern Rebuke 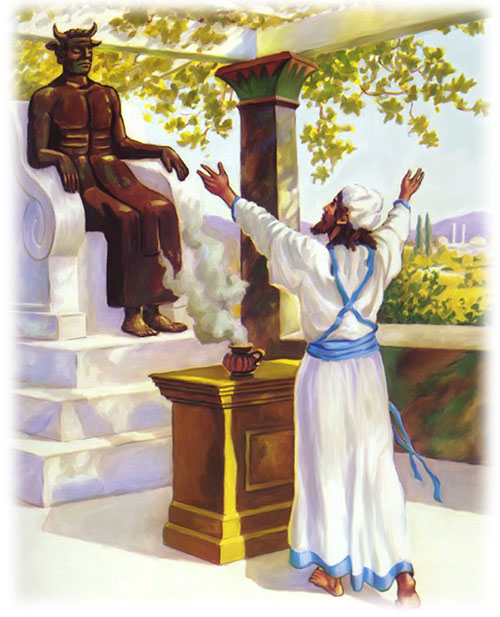 God never planned for His people to have any king except God Himself. He wanted them to trust Him, not a king or an army or some worthless idol. But they still wanted kings to lead them. And as the years went by, hardly anyone loved and obeyed God anymore.

Ahab was one of the most wicked of the kings of Israel. 1 Kings 16:30. He married Jezebel, a woman who hated God and worshiped the idol Baal.

But even though very few of God’s people were being loyal to Him anymore, He still wanted to save them. And He knew just the person who would help Him. His name was Elijah, one of God’s faithful prophets. Elijah would help the people understand how important it was for them to worship the true God instead of idols.

One day, God gave Elijah a message for King Ahab. Elijah knew that the message would make Ahab and his wicked wife furious. But Elijah trusted God; he was not afraid.

When Elijah arrived at the king’s palace, he boldly walked past the guards and went straight to where the king was. Without apologizing, he told the king his message. There would be no more rain nor dew, except at his word. 1 Kings 17:1. 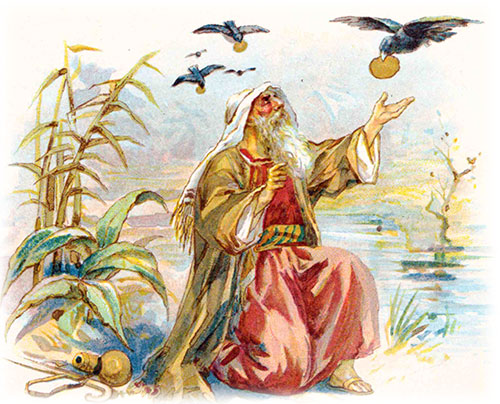 As soon as he had told the king God’s message, he turned around, went back through the palace, walked past the guards, and was gone. As he left the palace, God told him where to go next. 1 Kings 17:3-5.

God had thought of everything. Elijah would be in a safe place, and he would have food and water every day. Just as God promised, the ravens faithfully brought food every day. But what finally happened to the brook? 1 Kings 17:7.

Arriving at the town, he saw the widow gathering sticks; and he politely asked her for a drink of water and a little piece of bread. When she told him that she had enough food for only one more small meal, what did he say? 1 Kings 17:13, 14. 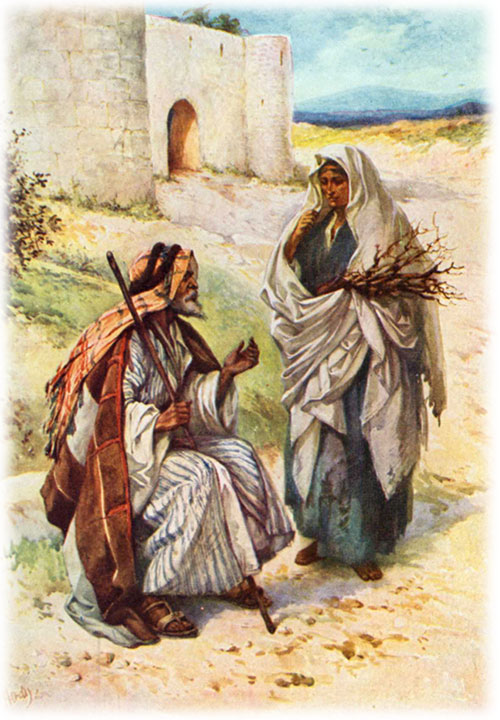 Just as Elijah had promised, God provided food for him, the widow, and her son. Every day, they had enough food to eat.

One day, while Elijah was staying with the kind widow, something very sad happened. The widow’s little boy became very sick, and then he died. Elijah prayed that God would make the widow’s son alive again. Did God answer Elijah’s prayer? 1 Kings 17:22-24.

When Elijah first said that there would be no more rain, no one had believed him. The priests of Baal told everyone not to worry. They said that Baal was in charge of the rain, and that the people didn’t need to be afraid of Elijah’s God.

But by the third year, everyone was very worried; and the wicked priests were getting frantic. They prayed louder, and they offered more and more sacrifices to Baal. But still the people did not choose to worship God.

The drought was terrible. The grass was gone, the trees were bare, and food became more and more scarce. People and animals were starving to death.

Queen Jezebel was furious. She hated God so much, she even had killed every one of His prophets that she could find.

Now King Ahab and his wicked wife longed to catch Elijah and kill him, too. They thought that he had caused the terrible drought. No one seemed to realize that everything that was happening was their own fault. 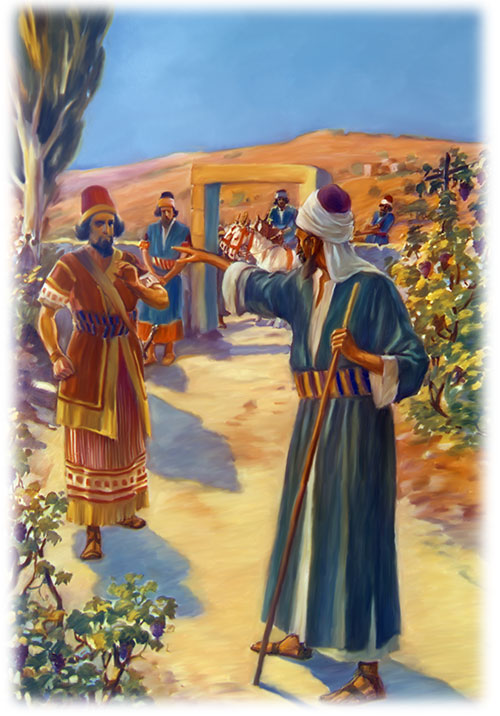 Elijah left the widow’s house and started down the dusty road to Samaria. What would happen when he met the king?

Obadiah loved God. He had saved 100 of God’s prophets from being killed by wicked Queen Jezebel. 1 Kings 18:13.

Imagine how shocked Obadiah was when he met Elijah. Ahab and Jezebel had sent people to every country to find Elijah. But God had kept him safe. Now, he told Obadiah to tell King Ahab to meet him at that place.

When Obadiah told King Ahab that Elijah wanted to see him, it was Ahab’s turn to be shocked. And suddenly he was scared. By the time he and his bodyguard of soldiers got to Elijah, he could hardly think of anything to say. So he just blamed Elijah for the famine.

Quickly Ahab sent word for all the people to come to Mount Carmel. They got there on time, because they didn’t want to miss anything. On the mountain, there were altars for the worship of Baal. There was also another altar where sacrifices had been made to the God of heaven before the people began worshiping idols. But now it was broken and tumbled down, because it hadn’t been used for a long, long time.

Everyone was quiet as Elijah spoke to them in a strong, clear voice. What did he say? 1 Kings 18:21.

Elijah was the only one on God’s side. And now it was time for the people to choose sides.

When Elijah told the people what the rules would be, they all agreed that they were fair. They would all have to decide whom they were going to worship—idols, or the true God of heaven. 1 Kings 18:22-24. 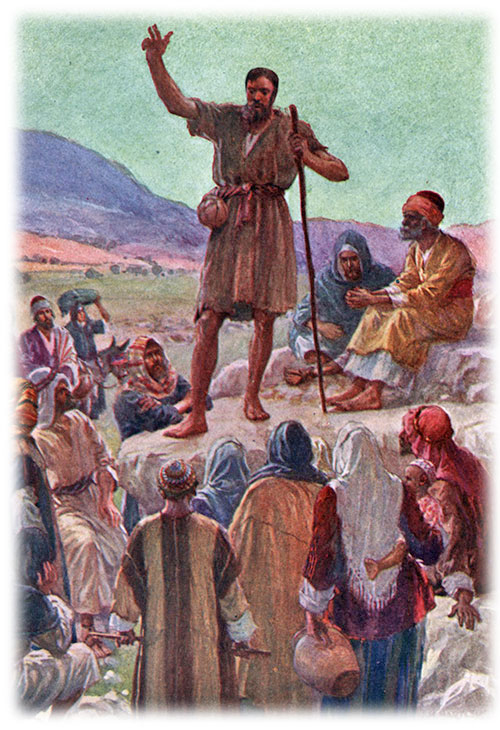 The contest between God and Baal started early in the morning on Mount Carmel. At least 450 of the prophets and priests of Baal were there, too. Elijah told them to offer their sacrifice first, and they did. He watched carefully, lest those wicked priests try some trick to light a fire under their sacrifice. 1 Kings 18:25, 26.

Hour after hour went by, and the priests got more and more frantic. When noontime came, Elijah started teasing them, but kept watching carefully, too. 1 Kings 18:27.

Finally they knew that there was no use to keeping trying. Baal couldn’t light the fire. Also, they were so disappointed and angry, they gave up.

Now it was Elijah’s turn. What was the first thing he did after inviting the people to come closer? 1 Kings 18:30.

Elijah made everything ready for his sacrifice. Then he did something special. What was it? 1 Kings 18:33-35.

Three times Elijah had the men pour four big waterpots of water onto the sacrifice. It soaked the wood and filled the trench around the altar. Now everyone knew that Elijah couldn’t light a fire under his sacrifice. The wood was too wet to even burn.

When everything was ready, Elijah knelt by the altar and talked humbly to God. How different from what the heathen priests had done all day! 1 Kings 18:36, 37.

As Elijah finished his prayer, what happened? 1 Kings 18:38.

God had answered Elijah’s prayer. The fire burned up the sacrifice, the wood, the stones, the dust, and even the water in the trench. The people were terrified. Falling to the ground, they covered their faces, afraid the fire would destroy them, too. And they knew they would deserve it. What did they all say? 1 Kings 18:39. 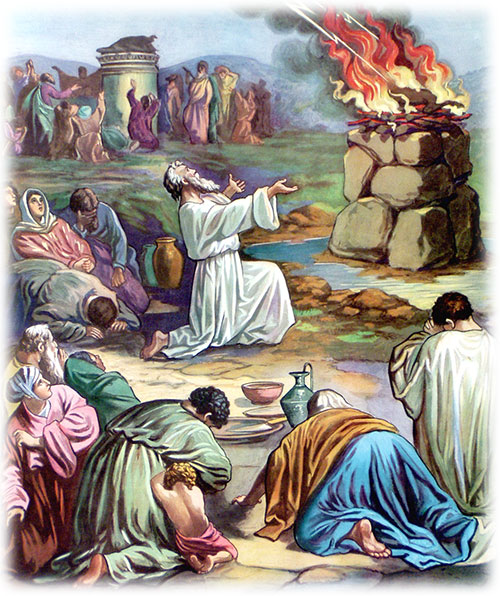 After the contest on Mount Carmel, the people had admitted that “The Lord, He is God.” But the wicked priests would not repent. Elijah knew that they must not be allowed to tempt the people to change back to Baal worship, so what did he immediately order? 1 Kings 18:40.

Now, at last, the rain could fall. Even though there wasn’t a single cloud in the sky, and it was as hot and dry as ever, Elijah knew that God would send rain. He told King Ahab to eat a good meal, because there would soon be lots of rain. While Ahab was eating, what was Elijah doing? 1 Kings 18:42.

After a while, he told his servant to see if there were any clouds in the sky. There wasn’t even one.

Did Elijah give up? No. He kept praying. When the servant looked at the sky the seventh time, he saw a tiny cloud rising over the sea. Then Elijah knew that God was answering his prayers. 1 Kings 18:43, 44.

Ahab’s chariot rolled through the gates of Jezreel to his palace, but Elijah decided to stay outside by the city wall. He wrapped himself in his coat, lay on the bare ground, and was soon sound asleep.

But he didn’t get to sleep very long. A messenger came and told him that the queen was planning to kill him. That scared him, and he ran for his life. 1 Kings 19:1-10.

After the way God had proven that He would take care of Elijah, and after what had happened on Mount Carmel, doesn’t it seem strange that he would run away? Wasn’t God just as powerful that night as he had been on Mount Carmel the day before? Yes.

Did God still love Elijah? Of course, He did, and He still took care of him.

Even though Elijah had run away, he still loved God, and he was loyal to Him. Now, God told him to anoint another person to take his place as a prophet some day. That person was Elisha.

Elijah didn’t feel hurt or jealous about it. Instead, he went to find Elisha. What was Elisha doing when Elijah found him? 1 Kings 19:19. As Elijah walked past Elisha, he put his coat over Elisha’s shoulders. Elisha knew what that meant. He was to be the next prophet.

Immediately, Elisha hurried after Elijah. What did he say? 1 Kings 19:20.

Elijah wanted Elisha to know that he must choose to either stay at home, or obey God’s call to work for Him the rest of his life. Did it take Elisha long to decide? What did he do? 1 Kings 19:21. 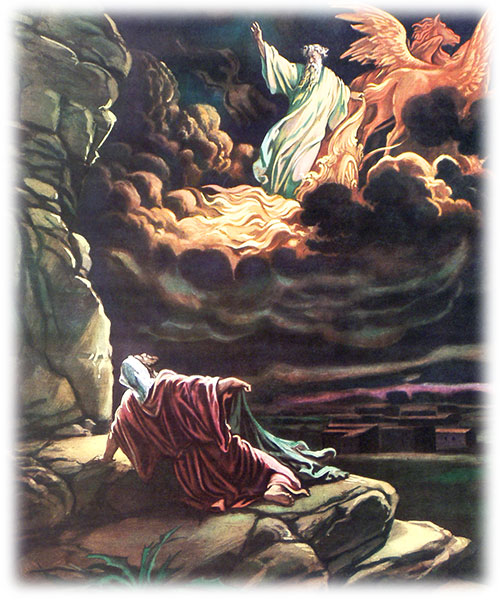 Elisha was younger than Elijah, and he was a good helper. They worked together for several years, often visiting the schools of the prophets. Samuel had started these schools many years before, but they had been closed. Elijah reopened them, and again students studied the Scriptures and learned about our wonderful God.

On their last visit together to three of these schools, Elisha refused at each of them to leave Elijah. Then they went on to the Jordan River. What happened there? 2 Kings 2:7, 8.

After Elijah and Elisha crossed the Jordan, they talked as they walked down the road. Suddenly, a chariot of fire appeared and took Elijah to heaven. 2 Kings 2:11, 12.

Elisha wondered how he could ever take Elijah’s place. But God was with him just as He had promised.

For many years, God used the prophet Elisha to help His people. But after he died, the people began to worship idols again.

After Elisha, God sent many more prophets to teach the people about our wonderful God and how to love, trust and obey Him. Also, they warned the people that if they refused to trust and obey Him, He could not protect them from their enemies. But most people didn’t even listen.

How many ways God had tried to help His people! Would they always insist on disobeying and choosing their own way? Oh, how much He loved them and wanted to help them learn to trust and obey Him! Only then could they be truly happy.

Sometimes it seems like many people are worshiping God. But other times, we might seem to be the only one who is choosing to do right. Do you want to follow God, no matter what other people choose to do?