We Want A King 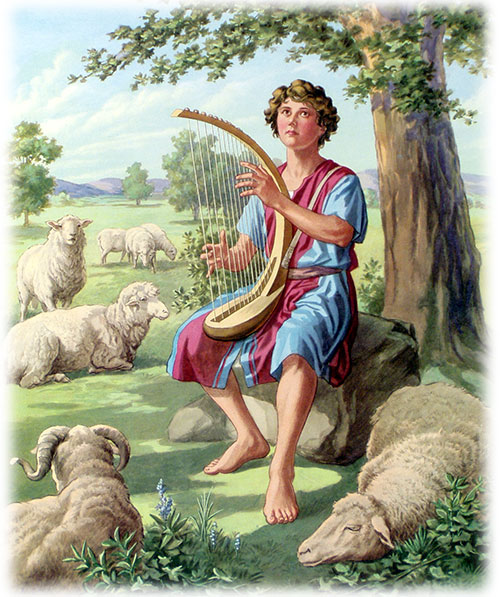 “David! David!” the servant called, as he ran quickly toward David in the field. “Hurry! The prophet Samuel wants to see you.”

As David ran, leaving a servant to take care of his flock of sheep, he must have wondered why someone as important as the prophet Samuel would want to see him.

For hundreds of years, God had sent judges to help the children of Israel when they got into trouble with their heathen enemies. Samuel had been a wonderful judge. But when he became old, the people told him that they wanted to have a king like the heathen nations around them. 1 Samuel 8:4-7.

Because God never forces anyone to obey Him, He let the people have the kind of king they wanted. His name was Saul. At first Saul obeyed God and depended on Him for help. But before long he became proud, and he began making excuses for disobeying God. Because he was choosing to obey Satan, God couldn’t bless him. How sad Samuel felt! 1 Samuel 15:10, 11.

God told Samuel that He had chosen another person to be the next king after Saul’s death. He was a person who would choose to love, trust, and obey Him. He told Samuel to visit the family of a man named Jesse, who lived in Bethlehem. One of his sons would be the next king. 1 Samuel 16:1.

One by one, Samuel met each fine-looking young man in Jesse’s family. And of each of them, God said that he was not the right one. Now Samuel was puzzled. “Do you have any more sons?” he asked the Jesse. 1 Samuel 16:10-11.

That’s when the servant ran to call David. And when David got to where Samuel was, God told the prophet that he was the right one. So Samuel poured some special oil on his head, and then left. 1 Samuel 16:12-13.

Can you imagine how David felt as he went back to take care of his sheep? It all must have seemed like a dream. He decided not to tell anyone, and Samuel didn’t tell anyone, either. They both knew that when the right time came, God would let David know when he was supposed to start being king. 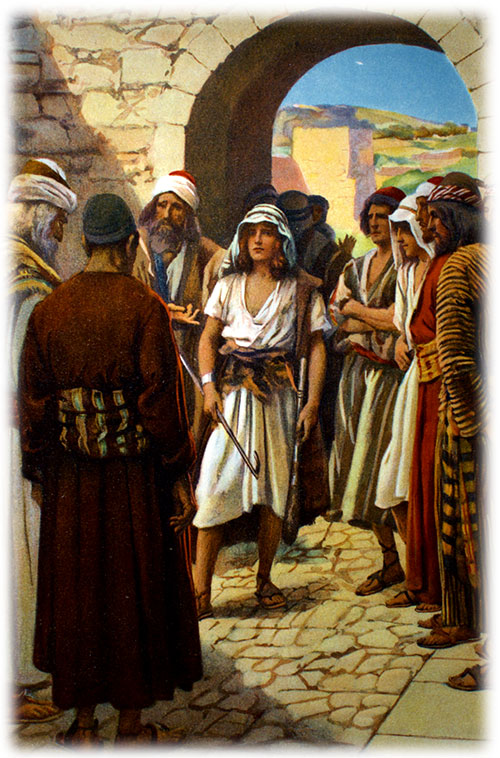 David wasn’t very old, but he was very brave. He truly loved and trusted God, and he knew that God was helping him. He liked to play his harp and sing as he faithfully cared for the sheep. One day, a lion tried to steal a lamb. David had only a shepherd’s stick and a sling to drive away wild animals. But he grabbed the lion, took the lamb away from it, and then killed the lion. Another time he did the same thing with a bear.

One time, while David was looking after the family’s sheep, Saul and his soldiers were getting ready to fight against a cruel, heathen nation called the Philistines. David’s three oldest brothers had joined Saul’s army, and one day David’s father told him to take some food to them. He wanted to find out how they were getting along. 1 Samuel 17:17-22.

But David didn’t run away. He couldn’t let that giant keep insulting God. “I’ll fight him! I’m not afraid!” he told King Saul. Then he told about fighting the lion and bear. 1 Samuel 17:32-37. 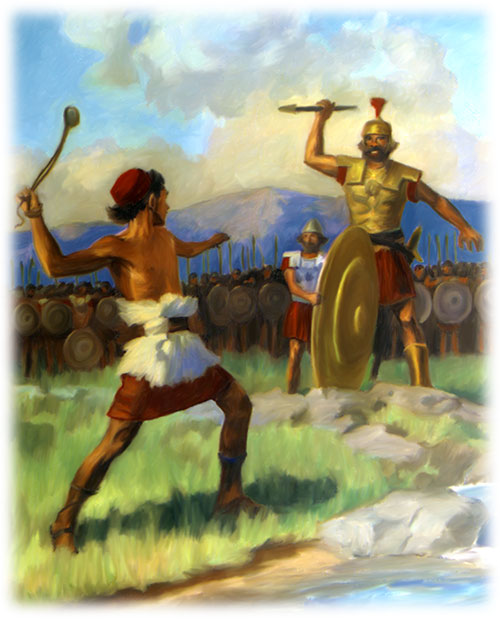 Saul tried to get David to use his armor to protect himself, but David didn’t need it. He was trusting God to help and protect him. He took his sling, picked up five smooth stones, and ran straight toward that giant, who was coming right toward him. Read the wonderful story about what exciting thing happened next. 1 Samuel 17:40-51.

What an exciting day that was! The wicked Philistine army rushed away, and Saul’s army chased after them. Everyone knew that our powerful God had defeated the enemy by using a young man who loved and trusted Him.

Saul was so pleased with how David had killed the giant Goliath, he wanted him to be a special soldier in his army. Soon David became best friends with Saul’s son Jonathan, and he even married one of Saul’s daughters.

Before long, David’s victories in battle received greater praise than did Saul’s. That made Saul jealous. He probably didn’t know that David was going to be the next king; but he could tell that God was blessing David, and that people liked him very much. 1 Samuel 18:7, 8, 12.

Soon it wasn’t safe for David to be with Saul. He even had to run away, because Saul became so jealous that he wanted to kill him. How sad!

For several years, Saul and his soldiers chased David and the men who had joined him from one hiding place to another. But God always protected them. David never did anything to hurt Saul, even though he had two chances to kill him. 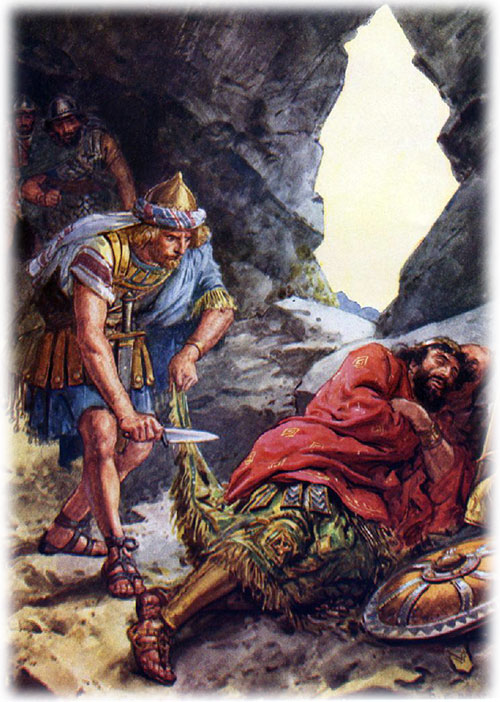 One time, David and his men were hiding in the back part of a big cave. King Saul and his men were nearby, trying to find David so they could kill him. Saul left his soldiers and went into the front part of the cave by himself for a while.

David’s men wanted to kill him, but David said “No.” They only cut off a piece of the king’s robe. David knew that God would decide when it was time for him to become the next king. 1 Samuel 24:4-7.

When Saul knew that an army of wicked Philistines was coming to fight against the army of Israel, he was afraid. He wasn’t chasing David at that time, and he tried to get a message from God about fighting the Philistines. How did he feel? 1 Samuel 28:5, 6.

Then Saul told his servants to find a witch, through whom he thought he could talk to Samuel, who had already died. He was so desperate, he was willing to talk to someone who worshiped Satan.

Saul knew that God had said there were to be no witches (mediums) among His people, but he talked to one anyway. Then, as Satan pretended to be Samuel, Saul believed him. But after that, Saul was more frightened than ever. 1 Samuel 28:20.

The next day, Saul and three of his sons died in the battle with the Philistines. What a sad ending! How much different Saul’s life would have been if he had chosen to trust and obey God!

Finally, David became king of Israel. 2 Samuel 5:3. He lived in a beautiful palace in Jerusalem, not far from Bethlehem, where he was born. He made a special tent for the ark that hadn’t been in the sanctuary for many years. There was a big celebration when it was taken to Jerusalem and placed in the tent.

One day, David called for Nathan, God’s prophet. He said, “Nathan, I am living in this beautiful palace, and the ark of God is in a tent. I want to make a beautiful temple for the ark. It will be a place where people can learn about God and worship Him.” 2 Samuel 7:2.

Nathan thought that was a good plan. “Go right ahead,” he said. But that night, God talked to Nathan and said, “Tell David that after he dies, his son who takes his place will build the temple.” 2 Samuel 7:12, 13.

David willingly obeyed God. Then he did his best to get a lot of the materials ready that would be needed for building the temple. 1 Chronicles 29:2, 3.

How different David was from Saul, who disobeyed God, and then made excuses! David sometimes did wrong things, too. But when he did, he was always truly sorry; and he didn’t make excuses. No wonder God could bless and help him!

After David’s son Solomon had become king, what question did God ask Solomon? How did he answer? 1 Kings 3:5-9.

Solomon could have asked for God to make him rich, or to kill enemies that tried to fight against him. But he didn’t do that, and God was pleased. So what did God tell him? 1 Kings 3:10-15.

Because of God’s blessing, Solomon became the wisest person in the whole world. 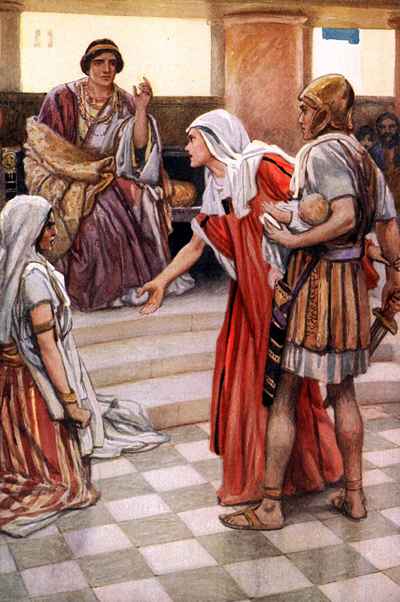 One day, two women came to ask him to settle an argument. Both women lived in the same house, and each one had a baby boy. During the night, one of the babies had died. The mother of the dead baby traded it for the living baby of the other mother who was still sound asleep.

The next morning, the two women argued about which of them was the real mother of the living baby. Finally they went to King Solomon, who carefully listened to them. He knew that one of them was lying. What did he say, and how did he decide to settle the argument? 1 Kings 3:23-25.

The mother of the living baby couldn’t let him be killed. Rather than that, she was even willing for the mother of the dead baby to have him. At once, Solomon knew which mother was lying, and he gave the baby to its real mother. 1 Kings 3:26, 27.

When people heard about what happened, how did they feel? 1 Kings 3:28. They knew that God had given him wisdom to be a good king.

For a long time, Solomon was faithful to God. It took him seven years to build the beautiful temple. When it was dedicated, everyone listened quietly as King Solomon reverently prayed a wonderful prayer, thanking God and asking Him to always bless His people. What happened when he finished his prayer? 2 Chronicles 7:1-3.

Other countries knew about Solomon, too. People came from many places to see the beautiful temple he had built for God, and to ask him hard questions. They learned about the wonderful God of Israel, too. 1 Kings 10:23, 24.

But after King Solomon became rich and famous, he stopped trusting and obeying God, and he made sad mistakes. He even married many heathen princesses. 1 Kings 11:1-4.

Gradually, Solomon became more and more careless, proud, selfish, and even cruel. Of course, he wasn’t really happy anymore, even though he had everything he wanted. He was miserable. And many of the children of Israel weren’t happy, either.

Before he died, Solomon was truly sorry for the wrong things he had done, and God forgave him. What are his last words in a book he wrote? Ecclesiastes 12:13, 14.

Solomon’s children copied the wrong things their father had done, but they didn’t become sorry. When Solomon’s son Rehoboam became king, he chose to be cruel like his father had been before he repented. 2 Chronicles 10:14.

When the Israelites saw what the new king was planning to do, the ten northern tribes decided to have a different king. Only the southern tribes of Judah and Benjamin chose to be loyal to Solomon’s son. And from that time on, there were two kingdoms. They were called Israel and Judah. 2 Chronicles 10:16, 17.

For many, many years, God sent prophets to warn both kingdoms that if they kept on sinning, some day their enemies would take them captives to other countries. 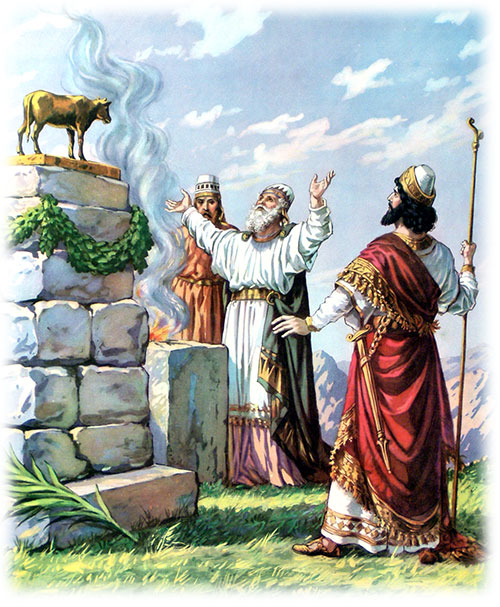 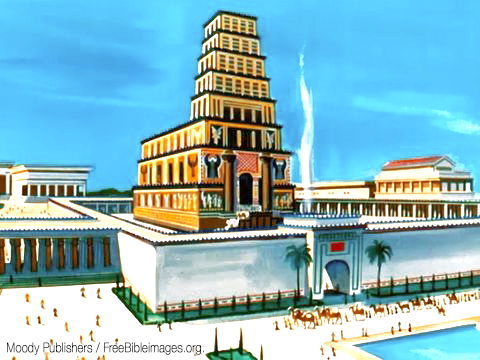 After Solomon, there were some good kings in Judah, and many bad ones in Israel; but there were always some loyal people in each kingdom. They worshiped in the beautiful temple that Solomon built in Jerusalem.

But when bad kings were ruling, most of the people followed their bad example. They worshiped idols, and even put heathen idols in God’s temple. Oh, how different everything would have been if they had only chosen to trust and obey our wonderful God! He wanted so much to help them be a good, strong nation.

But even though most of His people became very wicked, God never stopped loving them.

Help me to always be humble and follow God's leading in my life. Amen.