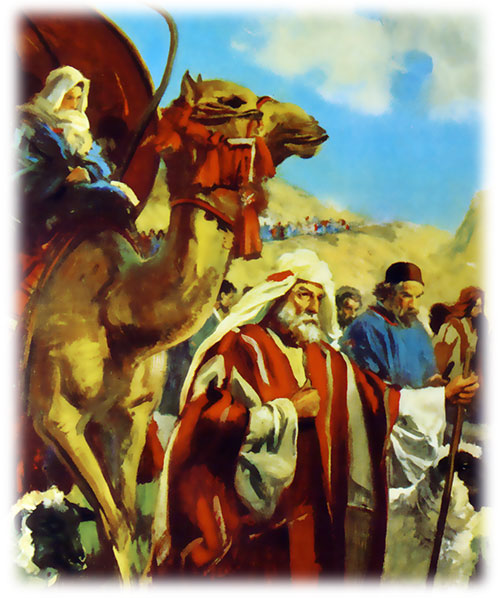 After God changed the languages of the people at the tower of Babel, they scattered over much of the world. Satan had fooled almost all of them into worshiping idols.

Not very long after Grandpa Noah died, a boy named Abram was born in a place called Ur.

Abram’s family was rich, and they were trying to worship God and idols at the same time. But Abram decided that he would be obedient to God and worship only Him, even if no one else did. He truly loved God with all his heart.

When he grew up, Abram married a very beautiful girl named Sarai. He and Sarai had many relatives and friends.

They had a beautiful home, many servants, lots and lots of land, and many flocks and herds of animals. But there was something they didn’t have that they wanted very much. Can you guess what that was? A baby.

One day, God spoke to Abram. Genesis 12:1-3. God knew that Abram would be loyal to Him and that he would teach his children to be loyal, too. So He wanted Abram to help Him do something very special. But He knew that Abram would have to move far away from his friends and relatives who were worshiping idols.

Did Abram make excuses when God asked him to pack up and move away from his home? He didn’t even know where he would be going. Hebrews 11:8. Abram didn’t ask any questions. He just obeyed because he trusted God’s promise.

Abram’s friends must have thought that he was crazy when he sold his beautiful home, packed his things, and told them that he would be living in tents. He couldn’t even tell them where he was going, because he didn’t know.

Abram’s father Terah, his brother Nahor, and his nephew Lot went with them as far as a place called Haran.

But after Terah died in Haran, God told Abram to start traveling toward the land of Canaan. His brother, Nahor, decided that he didn’t want to go any farther; he still wanted to worship God and idols. But Lot chose to go with Abram. 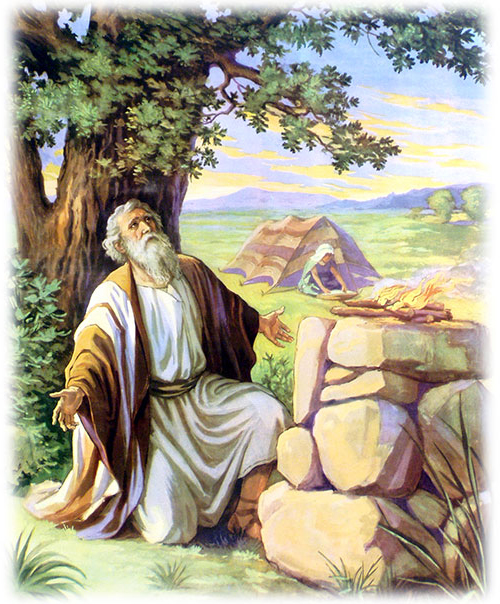 While they were in Haran, Abram and Sarai had been real missionaries, telling people about God. Many people had chosen to love and obey God, and they wanted to go with him when he left Haran. Abram welcomed all of them. Read Genesis 12:4, 5.

As they traveled on from Haran, they went very slowly. They stopped every night, because there were hundreds of people with them, as well as many cattle, sheep, and other animals.

Finally they came to the land of Canaan. The people who lived in Canaan were dangerous and wicked; but Abram was trusting God, so he wasn’t afraid.

Wherever Abram camped, he built an altar and gathered everyone around it for worship. As they watched the sacrificing of the animals, they were reminded again of God’s promise to save us from Satan.

After Abram had moved on and other travelers came by, they would see the altar that he had left behind. They knew that Abram had been there, and some would stop and worship the true God.

Several years after Abram had moved to Canaan, he and Sarai still had no children. He was beginning to wonder how God was going to keep His promise that he would be the father of a great nation.

God knew what Abram was thinking. Read the story of their talk together one evening after the sun went down. Genesis 15:1-6.

Can’t you just see Abram looking up into the night sky at the awesome number of stars? He was very old, and he didn’t even have a baby yet. Would he really have as many descendants as the stars? 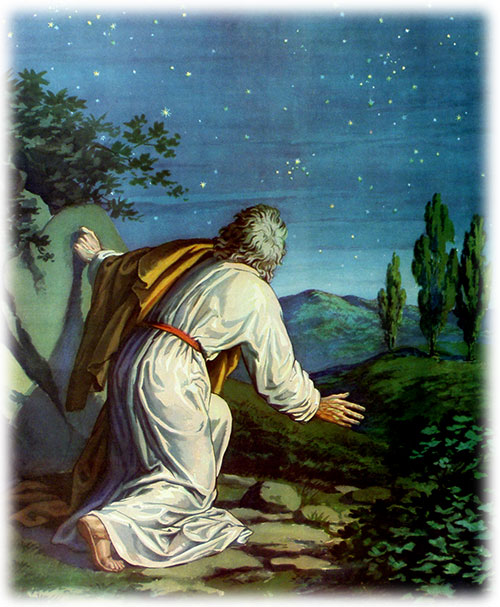 But even though he didn’t know how it would happen, Abram chose to believe that God would keep His promise. And can’t you see God smiling, pleased that Abram was choosing to trust Him?

After Abram’s talk with God, many more years went by. Now, Abram and Sarai were sure that they were too old to have children. After all, Abram was 99 years old. But had God changed His mind? Oh, no! Was He still able to keep His promise? Oh, yes! In fact, He knew just what Abram was thinking; and once more, He and Abram talked about it. Read what they said in Genesis 17:1-9, 15-22.

One warm day, not long after God had changed his name, Abraham was sitting by his tent door. As he looked at the lovely scenery, he saw three men walking toward his camp. When they got closer, they stopped and talked to each other, as if they were deciding which way to go.

Quickly Abraham hurried over to them and politely invited them to stop and rest a while. Genesis 18:1-8. No wonder so many people loved and admired Abraham! He was always friendly, polite, and thoughtful. 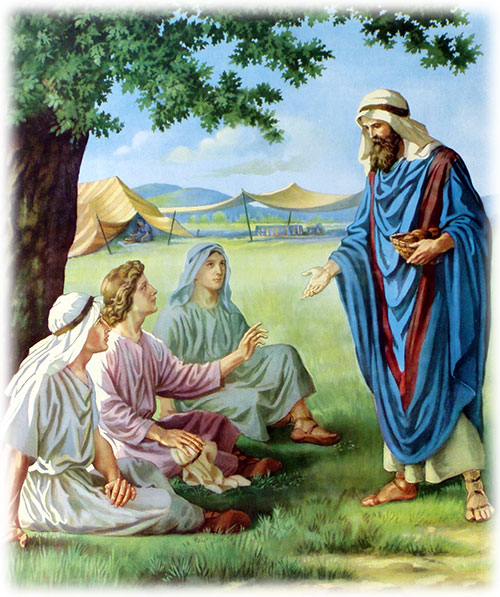 After they had finished eating, what did the visitors ask Abraham, and what did one of them say about Sarah?

Genesis 18:9-12. Remember, Abraham had laughed about what God promised. Now Sarah laughed, too. Genesis 18:13-15. Can you imagine the excitement when, at the very time that God said it would happen, Abraham and Sarah had the baby boy that God had promised?

Very quickly, the word spread for miles and miles around. “It’s a miracle. Sarah is 90 years old, and Abraham is 100 years old, and they have a beautiful baby boy.” People laughed for joy, and so did Abraham and Sarah.

It was a miracle. And everybody knew it, especially Abraham and Sarah. They even called their baby Isaac, which means “laughter!” Genesis 21:1-7.

How Abraham and Sarah loved and enjoyed Isaac! He was loving and obedient. Abraham carefully explained to Isaac the important meaning of the daily morning and evening sacrifices of the lambs.

Isaac learned all about the wonderful promise that Jesus would come to save us from Satan, and he chose to love, trust, and obey God, just like his father Abraham. 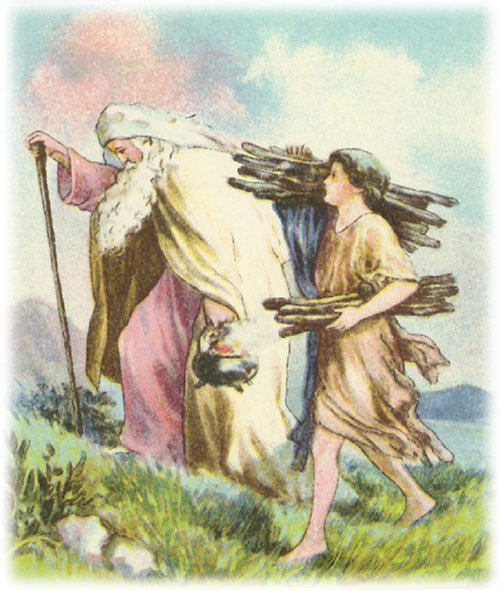 Most people in the world were worshiping idols and believing Satan’s lies. Isaac knew that God planned for Abraham to be the beginning of a special people who would choose to love, trust, and obey God, and be missionaries for Him. He knew that others would see how God can bless those who choose to follow Him. They would see how happy they are, and many other people would want to obey Him, too.

Abraham and God were such good friends that Abraham could always recognize God’s voice. When God spoke to him one night, Abraham immediately knew who was talking; and he quickly answered. What did God say? Genesis 22:1, 2.

Abraham was shocked. Could he have been dreaming? No. He knew God’s voice. But how could he possibly do what God was asking? Quietly he got up and went outside. When he looked up at the stars, he remembered God’s promise that through Isaac he would become the father of many nations.

Abraham went over and looked at Sarah. He didn’t dare tell her what God had said. Next, he went to Isaac, who was sleeping soundly. Oh, how Satan was tempting him to not do what God had just told him to do! Maybe Satan said, “God wouldn’t tell you to break His rule that says not to kill!” But Abraham knew exactly what God had said. Gently, he spoke, “Isaac, get up. We are going to offer a very special sacrifice, and we need to leave right away.”

Isaac had gone before with his father to offer sacrifices, so he wasn’t surprised.

Abraham called two servants. Quickly they packed everything that they would need: food, water, wood, a knife, and a little container with a fire in it that they could keep burning as they traveled. They loaded a donkey, and they were soon on their way. Read how the Bible tells the story in Genesis 22:3-6.

Those were three terrible days for Abraham. His heart was so heavy, he couldn’t talk much. He couldn’t yet bear to tell Isaac what God had told him to do.

As he and Isaac climbed the last part of the mountain, Isaac asked the question that Abraham had been dreading. What was it, and how did Abraham answer? Genesis 22:7, 8. Abraham just couldn’t tell Isaac yet. Maybe he was hoping with all his heart that God would do something so that Isaac wouldn’t be killed as a sacrifice. 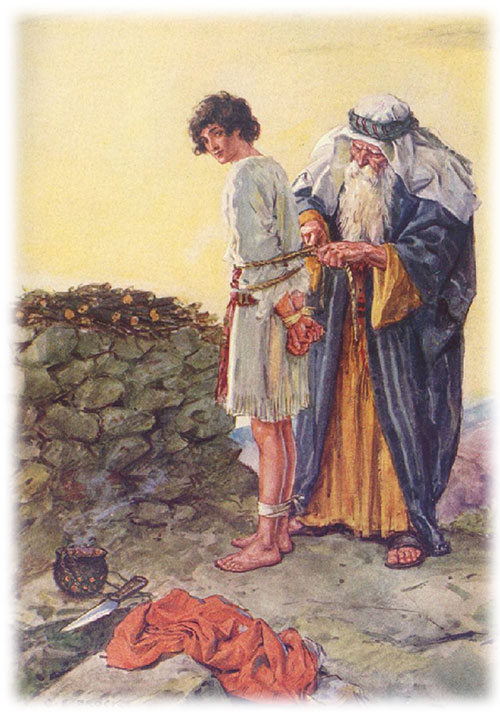 When Abraham and Isaac reached the top of the mountain, Isaac helped his father build the altar.

Now Abraham had to tell him what God had asked him to do. Can you imagine how shocked Isaac was? By now he was a strong young man, perhaps about 20 years old. He could have easily pushed his father away and gone back home. But Isaac had learned to trust God, too. “Do whatever God told you to do, Father,” he said.

They gave each other one last, long hug. Then Isaac laid down on the altar, and Abraham carefully tied him. Tears were streaming down Abraham’s face. His hands trembled as he picked up the knife and raised it.

Suddenly, a voice stopped him. Genesis 22:10-12. The knife dropped from Abraham’s hand to the ground. Oh, how thankful Abraham and Isaac were! This time, there were tears of joy as Isaac and Abraham hugged each other again.

Then, they both heard a sound. Baaa. Baaa. What was it? Genesis 22:13-19. God did provide the sacrifice. Once again He had proven that Abraham truly trusted Him.

Abraham knew that God had said it would be through Isaac that He would keep His wonderful promise. And he had still chosen to trust and obey God, even though it seemed that God couldn’t keep His promise if Isaac were dead. And he believed that God could have made Isaac alive again if he had died on the altar that day on the mountain. Hebrews 11:17-19. 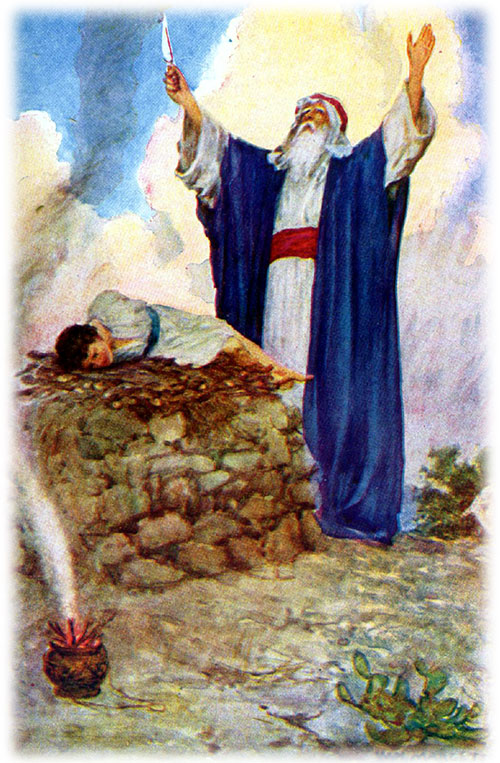 Let’s think about the story of Abraham and Isaac.

When people sacrificed lambs, what were they to think about? Read what John the Baptist said. John 1:29. Jesus, God’s precious Son who never even once disobeyed, would be the true Lamb that would die for us.

Did sacrificing the innocent lambs every day pay for people’s sins? No. It only helped them remember that God’s own Son would come and die in our place so we can choose to be safe from Satan.

Each of us deserves to die because we have all disobeyed God. Romans 3:23; Romans 6:23. But because He loves us so much, Jesus, God the Son, our great Creator, came to our wicked world and died in the place of each person.

Just think of how much God loves us! Read some verses about it that you already know. John 3:16, 17. Satan wants us to die forever; but God wants us to live forever.

The story of Abraham and Isaac helps us understand how hard it must have been for God the Father to give Jesus to die for us. It wasn’t easy for Him to let Jesus die in our place. Remember, there wasn’t anyone or anything to take Jesus’ place when He died for us, like there had been for Isaac.

Do you think that when Abraham and Isaac had their daily sacrifices of the lambs, they always remembered what had happened on the mountain? Do you think that they loved Jesus even more than they ever had before? And the more we know about Jesus, the more we love Him, too!

John 1:12 says that we may become children of God by believing in Him. Would you like to become one of God’s children, and be a blessing to others, as Abraham was?