In the beginning God created the heavens and the earth. – Genesis 1:1 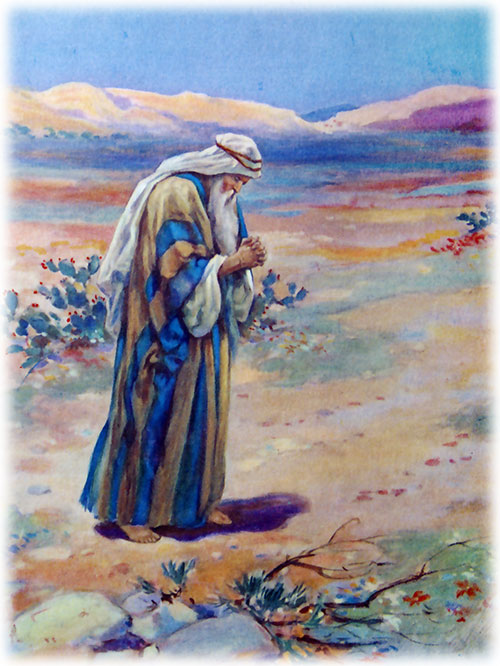 When God made Adam and Eve, they were perfect; and they would have lived forever if they had not sinned. But even after they sinned, they still lived a long time. How old was Adam when he died? Genesis 5:5.

After Adam’s son Abel died, his son Seth was born. Seth loved God. He and his children tried to be good missionaries to Cain’s children and grandchildren who did not love God. But hardly anyone listened to them. Most people only became more and more wicked.

One of Seth’s descendants was Enoch. He loved God very much, and he talked with Him every day. Enoch tried his best to convince people to choose to love and obey God. But only a few chose to change.

One day, when Enoch was more than 300 years old, God took him to heaven to be with Him. Genesis 5:24. How wonderful! God knew that Enoch would never change his mind and choose to follow Satan.

God was very sad as He saw people becoming more and more wicked. Finally, they became so bad, He knew that it was time to do something about it. Genesis 6:5, 11, 12 tell what the people were like. What did God say? Genesis 6:13.

God decided to send so much rain, it would make a flood that would cover the whole world, even the tallest mountains. Do you know the name of the man who would help Him? It was a man named Noah. Noah loved God very much. What did God tell Noah to do? Genesis 6:14. Then He told him just how to do it.

As the workmen built the ark, crowds of people came to watch. And day after day, and year after year, Noah preached to them and warned them about the Flood that was going to come.

It was 120 years before the ark was finished. By that time, everybody knew about the boat that Noah was building. But almost all of them just laughed and made fun of him. They thought he was crazy. 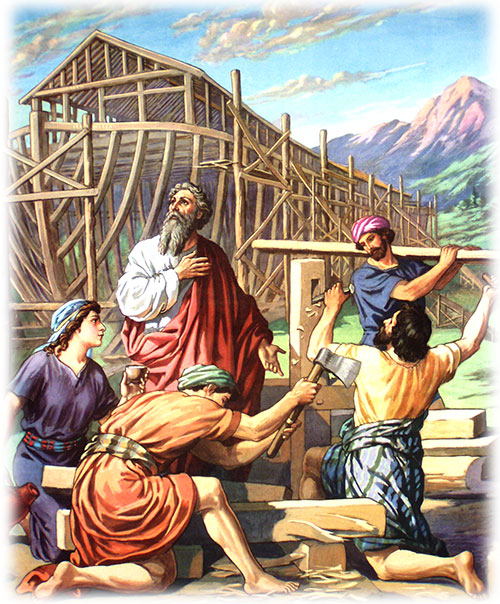 Before the Flood, it had never rained. No one even knew what rain was! But Noah wasn’t worried about that. He and his family were trusting God.

One day something amazing happened. Birds of every kind flew to the ark. There were two of some kinds, and seven of other kinds. Inside the ark, Noah and his sons gently put them into the cages that were all ready for them.

Then someone yelled, “Look!” All kinds of animals were coming to the ark—two of some and seven of others. Quietly, and in perfect order, they walked up the ramp to the door of the ark, just as if someone were guiding them.

People were shocked. What could it mean? Why were all those animals and birds going into the ark? God was leading them to the ark so they could be saved to live in the world after the Flood.

Finally, God told Noah and his family to go into the ark. Genesis 7:1. The huge door was far too heavy for them to close by themselves. Who closed the door? Genesis 7:16.

Outside, the people looked at each other. Some were afraid. But after several days had gone by, no one was worried anymore.

Inside the ark, Noah and his family patiently waited. They could hear the people outside making fun of them. But they still chose to trust God.

Then, on the eighth day, everything changed. Huge black clouds began coming in across the sky. Lightning flashed, and loud thunder rolled through the black clouds. Everyone was terrified. Great drops of rain started to fall. More and more rain fell until it was raining very hard.

Lightning hit beautiful homes and buildings, smashing them to pieces. Their idols and temples were knocked down. The wind blew like a tornado. The ground trembled and shook.

People beat on the ark, screaming, “Let us in! Let us in!” But God knew that none of the people were truly sorry. Their hearts hadn’t changed at all.

That terrible storm lasted for almost six weeks. But the ark kept riding safely on the water, because angels were guarding it. 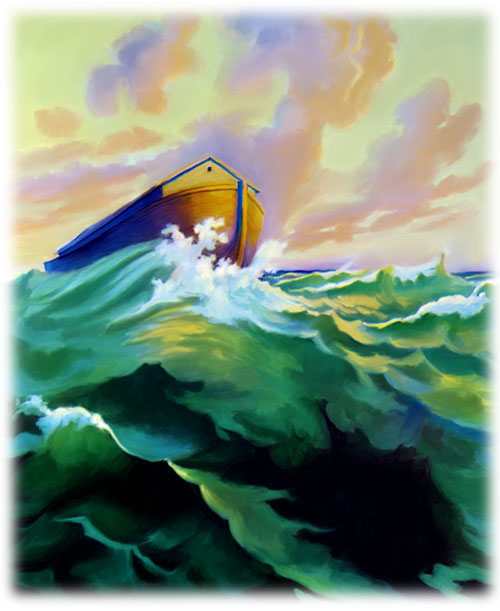 Finally, after 40 long days, the rain stopped. The whole world was one huge ocean. All the people and the animals that weren’t inside the ark had drowned.

But Noah and his family still had to wait while the wind blew and gradually dried up the water. Finally, after several months had gone by, the tops of mountains began to show above the water. Genesis 8:5.

Then one day Noah opened the window of the ark. He let a raven fly out to see if any of the ground was dry yet. What did the raven do? Genesis 8:6, 7. What other bird tried to find land? Genesis 8:8, 9. The dove must have been happy to get back to food and care in the ark.

Another week passed as Noah waited for the water to go down some more. Then he let the dove fly outside again. What happened this time? Genesis 8:10-12.

Can you imaging how excited everyone was? A leaf! A real live, green leaf! Things were beginning to grow again. Patiently they waited another week. Finally, God opened the huge door of the ark. Genesis 8:15-19.

The birds soared into the sky, the animals ran around and rolled on the ground. Finally, the long, long wait was over. There was dry land again.

The very first thing Noah and his family did was to thank God for keeping them alive and safe all through the Flood. Their sacrifice also showed that they still believed God’s wonderful promise that He had made so long ago that Jesus would come and die for us so we can live forever.

Maybe Noah wondered whether there would be another flood. So what did God promise? Genesis 9:11. Then God gave them a beautiful reminder of His promise.

“Look up,” someone said. There, arching in the sky, was the most beautiful rainbow you could ever imagine. Read Genesis 9:12-17. What a beautiful way to remind us of God’s promise! 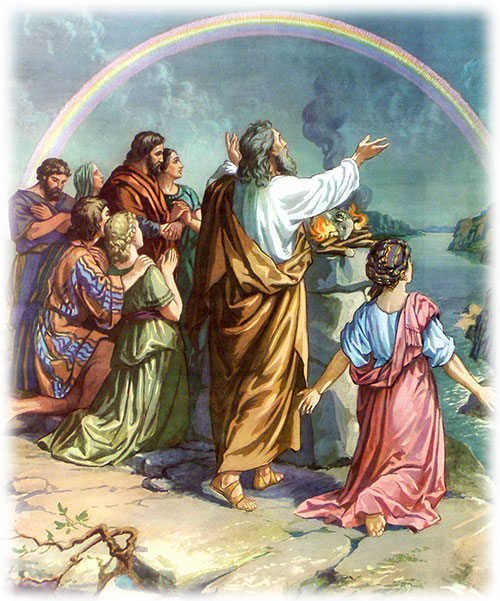 How different our world looked after the Flood! Now it seemed so bare. There were jagged rocks everywhere. The mountains had no trees on them. And now there were great oceans.

The beautiful forests had all been buried deep in the ground. The beautiful homes and temples that people had built, along with all their idols, were gone. What did God tell Noah the earth would be like? Genesis 8:22.

Maybe Noah had carefully saved seeds to plant after the Flood. Now he knew that seeds would still grow and make food for people and animals to eat.

When God first made birds, fish, and animals, they were all tame and gentle. But after sin came, the animals didn’t trust people as they had before. Many of them even became dangerous. God knew that they could hurt us, so He made them afraid of people. Genesis 9:1, 2.

After the Flood, it was time for Noah and his family to get to work. What do you suppose they did first? Build a house? Dig and plant a garden? Do you think they were busy? Yes.

But don’t forget that Satan was busy, too. Now he hated God more than ever. He was determined to do all he could to again make people believe his lies about God.

Before sin came, the angels in heaven, as well as Adam and Eve in our world, were perfectly happy, because they naturally obeyed our loving God.

But after Lucifer sinned, how different everything was! In heaven, each angel chose whether to believe God, or to believe Satan’s lies. Most of them chose to be loyal to God. But ever since Adam and Eve chose to disobey God, it has been natural for all humans to obey Satan instead of God. 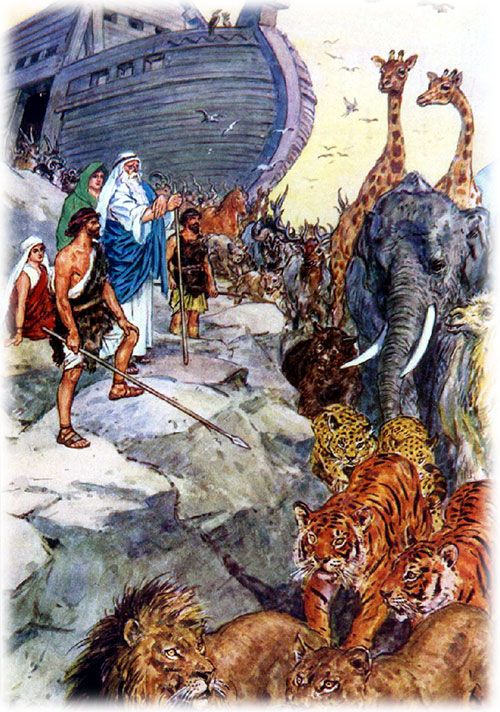 But we don’t have to obey Satan, do we? We can choose to obey God. And Jesus will always help us if we ask Him.

As time went by after the Flood, many babies were born. Those babies grew up, married, and had more children. And soon, our world had many people again.

No doubt Grandpa Noah told them about how beautiful the world was before the Flood. And he told them how sin started in our world when Eve chose to obey Satan instead of God.

He told them about the wonderful promise that some day Jesus would come to save us from Satan. He taught them that sacrificing animals would help them to always remember that promise.

But most of Noah’s grandchildren didn’t want to listen to him. That made him very sad.

Finally, the people who chose to obey Satan moved away from where Noah lived. They went to a flat plain beside a large river. There they built their houses and worshiped their idols. Noah was very disappointed. Genesis 11:2-4.

Those foolish people didn’t believe God’s promise that He would never send another flood. So they decided to build a tall tower. Then, they thought, if another flood should come, they could go to the top of their tower and be safe. It was called the Tower of Babel.

Because everyone spoke the same language, they all understand each other. But that soon changed. 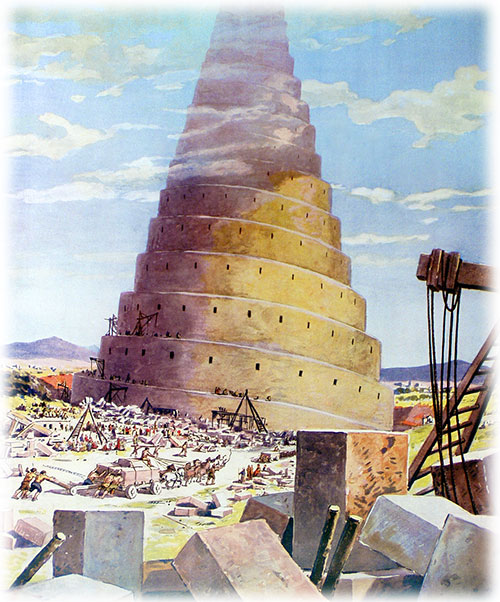 Is it a good idea for many people to be crowded together in one place? No. God planned for people to live in different places all over the world. He knew that it would be easier in big cities for Satan to tempt people to do bad things.

So God decided that He would scatter the people so they couldn’t finish their tower. How would He stop them? Genesis 11:5-7.

By the time someone carried up what he thought the man at the top had ordered, it wasn’t what he needed at all.

What a mess it was! There was no way that they could keep on building. Satan’s wicked plan had been stopped.

The city where the people had tried to build the huge tower was named Babel. That word means “confusion,” or mixed up. God had simply mixed up the way they talked, so they spoke different languages.

Then, families that could understand each other got together, packed their things, and moved far away to other parts of the world. That is how the many nations in our world began. Only Noah and Shem and their families had chosen to love and obey God.

Noah lived 950 years, and Shem lived 600 years. But after the Flood, many things changed. People didn’t live as long as those who had lived before them. There was sickness and disease. People ate and drank bad things and did whatever they pleased. How sad! But we can be glad that God has told us how to live so we might not have some of the diseases that kill people too early in life.

When God asks us to do something, should we wait until other people decide to obey? Do you want to ask Jesus to help you do what is right, even if your friends choose differently or make fun of you?