For God so loved the world that He gave His onnly begotten Son, that whoever believes in Him should not perish but have everlasting life. – John 3:16 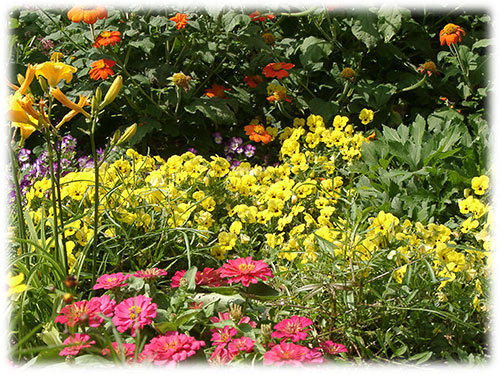 When God first showed Adam and Eve their beautiful garden home, He carefully pointed out two very special trees. One was called the Tree of Life. As long as they ate of that tree, they would live forever. The other was the Tree of the Knowledge of Good and Evil. God warned them not to eat the fruit of that tree. If they did, they would be disobeying Him and choosing to obey an enemy who wanted to hurt them. And they would die. Genesis 2:17.

So Adam and Eve understood why it was so very important to stay away from that tree. And they knew that they should stay close to each other. Do you think that they wanted to obey? Of course! And it wasn’t hard, was it?

They had everything to make them happy. Not one little thing was missing. They loved their beautiful garden home. They were learning so much about the wonderful things God had made.

How kind God was to not let Satan follow Adam and Eve everywhere! Was there any reason to go near the Tree of the Knowledge of Good and Evil? No. They could get every kind of delicious fruit from other trees. They could be safe and happy forever if they would choose to obey God.

Staying away from that tree would show that they were choosing to love, trust, and obey God.

While Adam and Eve were enjoying their garden home, Satan was waiting and planning how to spoil their happiness. One day, as Eve was busy in the garden, she noticed that she was very near the tree that God had warned them to stay away from. What should she have done?

But, instead of rushing away, she just stood there, looking at the beautiful fruit. The fruit really looked delicious. She wondered how it could hurt anyone.

Suddenly, a soft, beautiful voice asked a question, almost as if whoever was talking knew what she was thinking. It wasn’t Adam’s voice. Whose could it be? It was Satan’s. But he didn’t look like an angel. What did he look like? Genesis 3:1.

A serpent? Eve knew that animals couldn’t talk. But this one seemed to be talking. What happened next? How did Eve answer? Genesis 3:2, 3.

Then what did Satan say? Genesis 3:5. That was like saying that God didn’t really love them, and that He was selfish.

“See how wonderful it is,” Satan told her. “I couldn’t talk before, but now I can. Here; try some of the fruit; it’s delicious!”

It all seemed so safe, so Eve decided to believe the serpent. She took the fruit and tried it. It was delicious. She must share some with Adam and tell him what had happened. Quickly, she picked some of the fruit and ran to find him.

As Adam listened to Eve, he knew what had happened; and he felt terrible. He knew that Satan had been talking to Eve through the serpent. And even though she said how wonderful she felt after eating the fruit, he knew that she would die. How could he possibly be happy without his beautiful Eve? For a moment, he hesitated; then, quickly, he made his choice and ate the fruit. 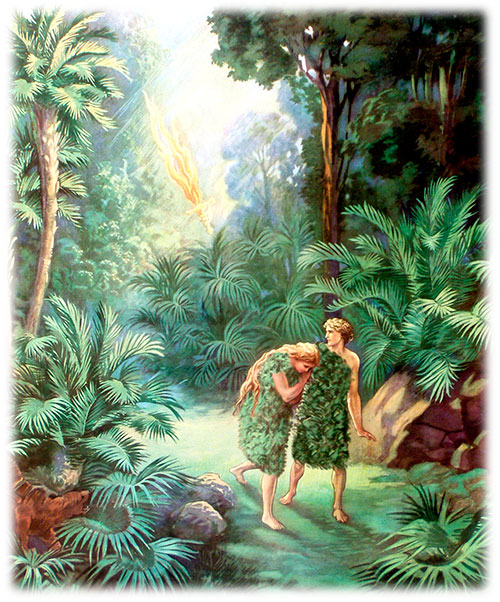 For a little while, Adam and Eve were excited about how they felt. But then they suddenly noticed that they were naked, and that it was almost time for God to arrive for their evening visit.

They had always eagerly hurried to meet Him. But now they hurried to find leaves big enough to cover themselves. When they heard God’s footsteps, they hid among the trees. Then they heard His loving voice calling, “Where are you, Adam?”

Slowly, Adam and Eve went to meet God, wearing the leaves. They told God that they had been hiding, because they were ashamed of being naked.

God looked very sad as He asked, “Did you eat from the tree I warned you about?” Maybe they had already started blaming each other for what had happened. Let’s read about how they answered God. Genesis 3:12, 13.

Blaming. Adam blamed Eve, and Eve blamed the serpent. Satan had led them to disobey God and to obey him instead. So now they were acting like Satan when he tries to blame God.

Very sorrowfully, God had to tell Adam and Eve what would happen to them. They would have to leave their beautiful garden home. Everything would change. Even the plants and the animals would be different. All living things would finally die. And they would die, too.

But there was one thing God would not let Satan spoil. Adam and Eve could still choose.

Do you think that Satan was sad? No. He hoped that the beautiful world that God had made for Adam and Eve would now belong to him and his evil angels.

Satan hoped that Adam and Eve would still eat from the Tree of Life and live forever as sinners.

But things didn’t turn out that way. Adam and Eve had to leave their beautiful home in the Garden of Eden. A powerful angel with a flaming sword guarded the gate to the garden and the Tree of Life so no one could eat its fruit.

God knew that the people who would choose to obey Satan could never be happy. It would not be kind to let them keep on living when they had chosen to disobey the only One who can give life to anyone.

Do you think that God had ever wanted Adam and Eve to feel what it would be like to obey Satan? No.

But now they knew that Satan tells lies and that he is cruel. They knew that everything would change, and it surely did.

How embarrassed Adam and Eve were in their leaf coverings! What did God do for them? Genesis 3:21.

When God spoke to the serpent, He was really talking to Satan. The serpent would always remind them of Satan. It would no longer be a beautiful creature. It would crawl on the ground, and people would be afraid of it.

ou can be sure that Satan was listening to every word that God was saying. When God said the words in Genesis 3:15, Satan knew that they were important; and so did Adam and Eve. They knew that somehow God was going to do something that would help the people in our world. 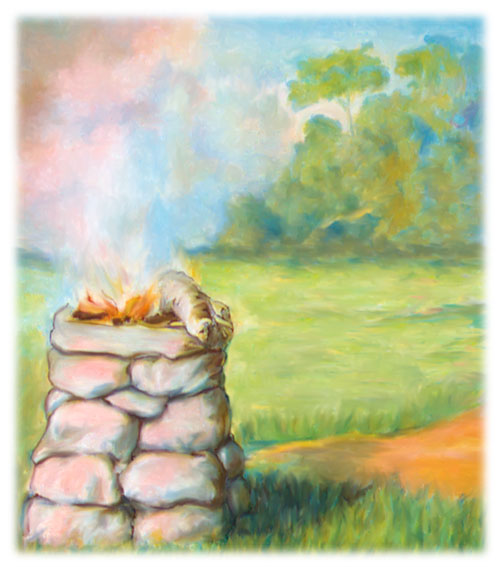 God wanted Adam and Eve to understand what would have to happen in order for people to still be able to choose to obey God instead of Satan. So He asked Adam to bring a lamb. You can be sure that Adam brought his favorite one.

Then God showed him how to build an altar. Adam must have wondered what was going to happen. Next, God told him that he must kill the dear, little, innocent lamb.

Kill? Adam had never seen anything die—not even a leaf. He and Eve must have been sobbing as he obeyed.

They laid the dead little lamb on top of the altar. Then there was a flash of fire, and they watched the dear little lamb burn up.

Gently, God reminded them that they deserved to die and be forever gone, just like the little lamb. But some day, Someone special would be born who would die in their place. John 1:29.

Oh, how thankful Adam and Eve must have been! Now they understood about what God meant in Genesis 3:15. They also knew that God always tells the truth. So they determined to obey with His help.

God told them to offer the lamb sacrifice each morning and evening. It would remind them of God’s promise; it would show that they were choosing every day to obey God and to trust Him to save them from Satan.

How happy and excited Adam and Eve were when their first baby was born. Perhaps he would be the person God had promised who would save them from Satan.

They named their first baby boy Cain. The next baby boy they named Abel. How carefully they taught them about obeying! Abel especially liked taking care of sheep. Cain liked working with plants.

Both boys watched the morning and evening lamb sacrifices. They saw fire flash down from heaven to burn the sacrifices, showing that God was pleased that they were choosing to believe His promise.

Of course, Satan was busy tempting them to believe his lies about God. Abel chose to love, trust, and obey God. But Cain chose to blame God for how everything had changed since his parents had disobeyed in the Garden of Eden.

Adam and Eve told them of Satan’s terrible lies about God; and sadly, they told how they themselves had made wrong choices. But still, Cain chose to listen to Satan.

When Cain and Abel were older, they started offering sacrifices for themselves. They built their altars just as they had been taught. Then they brought their offerings.

What were they supposed to bring? Yes, an innocent lamb that had never done anything wrong.

The sacrifice was to always remind them that because we have all disobeyed God, we all deserve to die. But God the Father, God the Son, and God the Holy Spirit love us so much, they made a plan to save us from Satan. Jesus, God the Son, who created us, would come some day and die in our place. How awesome!

Abel brought his lamb. But Cain really didn’t believe that it was important to sacrifice a lamb. Instead, he brought things from his garden to put on his altar.

When the fire came from heaven, it burned up only Abel’s offering.

Cain was very angry with his brother, as if it had been Abel’s fault that God did not accept his sacrifice. God felt sad about the choices Cain was making. He even talked to him about it. Genesis 4:3-7. 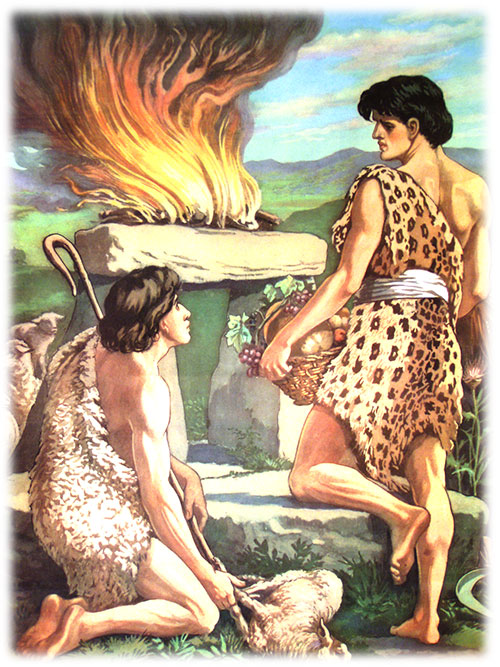 Cain must have thought a lot about God’s talk with him. But instead of admitting that he had been wrong, he still thought that God wasn’t fair, and that all his problems were God’s fault. Would he choose to believe Satan’s lies about God?

Read Genesis 4:8. What choice had Cain made? Oh, how sad! Can you imagine how Adam and Eve felt when they found out what had happened? Seeing plants and animals die was terrible. But now, their own son had been killed. And to think that it was because they had disobeyed God and eaten from the forbidden tree!

God was feeling sad, too. He talked to Cain once more. Genesis 4:9-15. Cain was very rude and disrespectful, wasn’t he? He was choosing to not admit that he had done anything wrong. But God knew exactly what Cain had done. No one can ever hide even one little thing from God. Ecclesiastes 12:14

Now Cain was afraid, but he was still not sorry. In the end, what did he do? Genesis 4:16.

Remembering What My Bible Says . . .

God still loves us and wants to help us, even when we disobey and make wrong choices. Do you want to ask Jesus every day to help you make right choices?

Back to Top
© My Bible First Bible Lessons & Logos are used by permission.